00:00 / 16:39
Spotify Stitcher
RSS Feed
Share
Link
Embed
Somewhere in West Jordan, in an underground bunker, a man is making dick jokes. For over 100 episodes, the guys at The Left Show have been dishing up the pressing political issues of the day, all the while piling on an insurmountable amount of self-deprecating humor.

All That Is Left: The Left Show Celebrates 100 Episodes 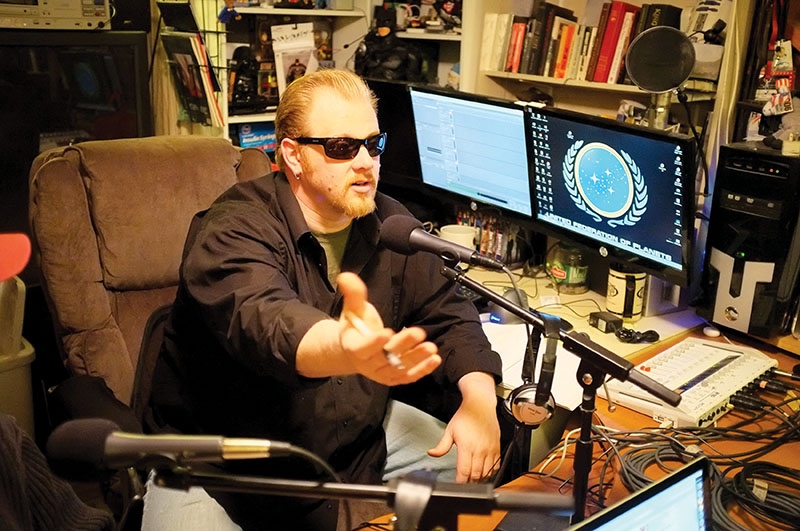 Somewhere in West Jordan, in an underground bunker, a man is making dick jokes. For over 100 episodes, the guys at The Left Show have been dishing up the pressing political issues of the day, all the while piling on an insurmountable amount of self-deprecating humor. If you’re someone who wants to get the inside scoop on local politics, find out what Speaker Boehner is crying about these days or what Joss Whedon is up to, then The Left Show is for you. Featuring the crass mouths of Jeff Bell, JC Carter, Jake Winegar and Forrest Shaw, the cast of The Left Show spends half of every Sunday talking about politics and pop culture. Surrounded by Star Trek toys and Bell’s library of sci-fi novels, these guys somehow find a way to pump out four hours of show, all while sipping on the nearest, cheapest beer.

Bell, the show’s primary host, is a known, local Democratic communications consultant and a former staffer for the DNC and the Utah Democratic Party. Prior to founding Defenestrate Media, Bell worked in radio in Denver and eventually got the opportunity to produce a show called Left of the Dial for KSL Radio for over three years. “A childhood dream was fulfilled, and I got to work for KSL,” says Bell, “and it was ‘be careful what you wish for because you might get it.’” Bell’s show was relegated to the later part of Saturdays, often being bumped in order to air sporting events. “I was never censored, per se [by KSL], but there were a lot of pre-air warnings.” Bell was eventually fired after a controversial episode revolving around the resignation of Rep. Kevin Garn. Garn resigned on the House floor and confessed to “hot tubbing” with a minor in the early ‘90s. “Right before I went on the air that day, I received a call from the program director reminding me that there was a bright side for every story. That was their new mission statement,” Bell says. Garn was received with a standing ovation by members of the House, something that didn’t sit well with Bell. “I knew I was done before I got home. The ironic fun thing was two days after I was fired, the City Weekly called me and said I had won the Best [168th Hour of the Week],” he says.

After leaving KSL, Bell decided to embrace his entrepreneurial spirit and start building his own media empire, one show at a time. “I could do my own show with my own rules and my own lack of FCC restrictions,” says Bell. “I want to make some sort of an impact: an area of change, a place where people can go that are frustrated with the GOP light of the Democratic core.” Even though the show is called The Left Show, not everyone considers themselves as liberal as Bell. “JC is kind of a libertarian, Jake is in the Marine Corps, so he thinks to the right on most things, even though he swears to god he’s not a Republican,” says Bell. “Forrest is a fun voice—he’s just two inches from the center … He has a very wry, twisted look on life.” Bell and the gang try to produce a show where the audience feels included in the conversation. “You know when you read a good book and [when] you’re done, you miss the characters? That is what I want when the closing song comes on our show,” says Bell.

Bell believes that podcasts like his own may one day surpass politically related radio advertising based on different types of listeners. “Radio is a very casual relationship … With podcast and new media, people go to my stuff, they grab it and they listen on purpose. That is a huge difference.” Furthermore, Bell feels that the podcast is an underutilized medium when it comes to political communications. “Democrats and Republicans do not understand how new media works,” says Bell. “[They’re] spending money on shit that doesn’t work.”

The Left Show is dedicated to pissing off any and every “wacka-doodle” politician in Congress. The show’s recent fund drive is offering up different levels of annoyance to elected Republicans based on the amount of money given. Called the “Annoy-a-GOP-a-thon,” the show promises to send a letter or parcel in the patron’s name to the elected GOP official of their choosing, and inform the member of Congress that someone has decided to support The Left Show because of members of Congress like themselves. “We’re not the rollover part of the party. We don’t capitulate. I have no desire to bring on opposing viewpoints,” says Bell. “There are hundreds of hours a week of right-wing radio, and I see absolutely no reason to offer a forum.” So far, Senator Hatch and Representative Chaffetz have been sent parcels.

You can check out The Left Show on Mondays and Wednesdays at theleftshow.com, or find them on iTunes or Stitcher.

Recommended If You Like:
San Clemente Punk
Outer Darkness Podcast