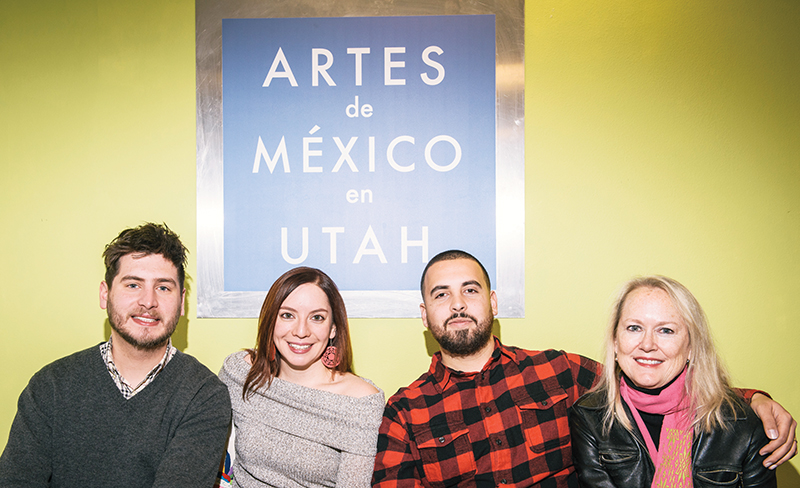 Artes de México en Utah, a Utah community nonprofit, is celebrating its fifth anniversary this month. Five years is a momentous occasion for a nonprofit organization. This organization is small—only one full-time staffer supported by a resourceful, enthusiastic board and dedicated volunteers—but their mission, to promote the appreciation of Mexican art in Utah, is boundless.

Their journey began in 2010, when the Utah Museum of Fine Arts (UMFA) featured a traveling exhibition, Las Artes de México from the collection of the Gilcrease Museum. UMFA asked Susan Vogel, Artes de México co-founder, to create a companion exhibit on Pablo O’Higgins, as she had been writing a book about his deep ties to Utah. Vogel was impressed by the connection that youth visitors and patrons had made with a personality like O’Higgins’ and realized that his connection to two places was an experience they related to.

At the same time as this exhibit, “Politics had heated up over immigration reform, people were wary of going out in public, [and] people felt threatened by deportation and breaking up families,” Vogel says. She feared that the Saturday Family Day activities at the UMFA—and subsequently, Las Artes de México and the O’Higgins exhibit—would be deserted. Instead, as she turned the corner from the parking lot to the museum entrance one Saturday, she witnessed the power of art to bring people together. Hundreds of families—close to 2,000 people—showed up to enjoy food, games, crafts and conversation. “At the exhibit’s wrap session, we sat down and brainstormed how to keep this momentum going,” she says. With the support of early grantors—the Utah Humanities Council, Utah Division of Arts and Museums, Salt Lake City Arts Council and ZAP—and a strong partnership with the Consulate of México in Salt lake City, Artes de México en Utah was formed.

Artes de México has since celebrated the visual arts through statewide traveling exhibits featuring the work of artists Frida Kahlo, José Guadalupe Posada, Agustín Casasola and José Maria Velasco, to name a few. Also, once a month, Artes de México offers academic discussions at the lovely and historic Jane’s Home in downtown Salt Lake. Claudia Benítez, an Artes de México board member, says, “Culture isn’t just art or music—it’s everything that connects a community. Our programs honor the rich Mexican culture.” This series features professionals and educators discussing everything from contemporary Mexican architecture to the history of tequila.

Latino immigrants are often expected to leave their culture in the past and adopt the “American Way” in the States. Contrary to the typical “melting pot” theory of the U.S., however, Artes de México board member Renato Olmedo-González relates the Latino cultural dynamic to a salad effect: “In the melting pot, we don’t know where one starts and the other finishes, but for Latinos, we can pick out the pieces—we’re more like a tossed salad,” he says. This tossed-salad effect can be traced back generations upon generations to the early colonization of Mexico. Art provides a great access point to relate to communities, history and heritage. Artes de México offers classes in English and Spanish on a variety of subjects including Ancient Mexico, Colonial Mexico, the Mexican Revolution, Mexican Muralism, Post-Revolution art and society, and contemporary Mexican and U.S./Latino art.

Over the last five years, Artes de México has found much success in offering programs as diverse as the community it represents. Mainstay programs like the Mexican Independent Film Tour—a collaboration with the Salt Lake Film Society and the Consulate of Mexico in Salt Lake City—celebrates its fourth year while the third annual Sor Juana Poetry Competition pushed through tradition and became the first Spanish-language program to receive honors during the Utah Humanities Book Festival. Named after 17th Century Mexican poet Juana Inés de la Cruz, the competition is sponsored by the Utah Humanities Council, and this ceremony was the first time that Spanish-language poetry shared the main stage with the many other valued content and programs of the Humanities Council. Check artesmexut.org to find out how to submit come mid to late spring.

Dia del Niño, a project of the Consulate of Mexico in Salt Lake City, takes Artes de México programmers back to their childhood. Dia del Niño, the celebration of Children’s Day, is on April 30. Olmedo-González says, “I always looked forward to Children’s Day activities when I was a kid. Children get the day off from school, and kids are out playing at the parks and running through the sprinklers. I remember going on special field trips, but they don’t celebrate it here in the States.” The Consulate chose to partner with Discovery Gateway and Artes de México to create Utah’s first Dia del Niño celebration last year. Hundreds of people showed up to give their kids the opportunity to celebrate this holiday like they did as children, and others wanted to teach their kids about different cultures and traditions. The community’s response was so amazing, the Consulate has decided to make this an annual celebration, continuing their collaboration with Artes de México and partnering with the Natural History Museum of Utah for this year’s event.

Artes de México isn’t just for the Latino community or just about art—Artes is for our entire community. If you’d like to know more about this fabulous community resource, their extensive programming opportunities or forthcoming fifth-anniversary activities, join their newsletter at artesmexut.org. Classes are free and open to anyone!