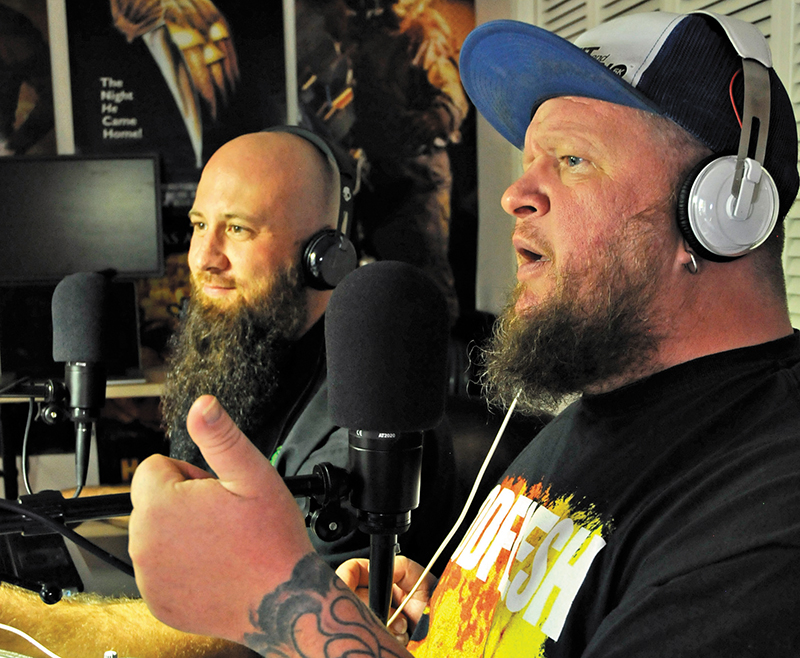 Audio Atrocities with the Corpse Cast

Horror cinema and extreme/spooky tunes go together like fuck and shit. Usually, the shit is nodding your head to a screaming track or a tasty riff, and fuck is the verb you use when you see something shocking onscreen. Enter Corpse Cast, which is fast becoming a vocal commodity about local extreme music, horror/exploitation film and all things scary culture, with mostly guest musicians on air for nearly all of the last 30 episodes. Mike Cadaver and Shane Diablo started up Salt Lake City’s Corpse Cast in 2012, and it now has well over 200 episodes under its belt.

SLUG: Is there any type of subject that is too taboo or off limits for you to talk about?

Diablo: I am pretty much game for anything Mike throws my way … and Heavens to Betsy, he sure has thrown some curveballs, some really dirty, icky, disgust-oid films, and even some damn-right dumb, too, but it’s all in good fun.

SLUG: When and why did you start to have interviews with musical acts?

Diablo: For me, it was just a change of pace. We had done some 180 episodes where we focused on an album from a band and a movie. Getting other people in the room, on the mics—especially bands—you’re bound to have some interesting conversations.

Cadaver: It felt right after a while, as I’d started meeting a bunch of local folks in the valley and becoming friends with them, to invite them on the show. We’ve had a ton of bands on that have so much talent and great music to share. We figured we’d be doing our listeners a huge favor by introducing them to these bands.

SLUG: What do you think is your most proud accomplishment from the podcast since it started?

Cadaver: I have a secret … I started this podcast as an excuse to have a regular playdate with Shane. I totally agree with him about the rapport. I just have so much fun doing this show. I’d say, however, our most proud accomplishment from the podcast is that we were discovered by a fledgling media company a couple of years back. Our show was added to a lineup of other horror-themed shows through Zom-Bee TV. It’s now defunct, but we were flown out to Washington, D.C., and Virginia to do some press for the channel. We were able to visit The Exorcist stairs and go sightseeing around D.C. Since then, we’ve also put out our own channel. It’s available on the web and Roku as premium content. In fact, I’m in the process of building an Android and iOS app for our channel. The intent is to actually provide a media platform for smaller-content providers to have a way to distribute their videos, audio, etc.

SLUG: What do you think is the strongest part of Utah’s extreme music community?

Cadaver: I think that there is a shit-ton of talent in Salt Lake City. We have a small scene compared to other places (or so I’m told), but I can’t imagine a more passionate group of people. I can’t believe that the quality outside of Salt Lake (and Utah) is much if any better than it is here.

SLUG: Of your podcast, audio/video is a paid portion. Why did you decide to do this, and what do folks who pay get that is extra?

Cadaver: All of our audio podcasts are totally free. We have a ton of extra content as part of our premium. We’ve got a video version of our show; we have behind-the-scenes shenanigans, video of shows we’ve filmed, a bunch of episodes of little shows we produce, and a ton of old-school horror and exploitation flicks available. You can subscribe for however much you want, at least $1 a month. We use the money from that to buy and maintain our equipment, pay hosting fees and supply us and our guests with beverages a plenty! Visit premium.corpsecollective.net for more information on that.

To livestream the Corpse Cast, follow facebook.com/cadaverlab and tune in on Fridays at 7 p.m. You can also tune in on iTunes, Stitcher and other podcatcher feeds. One thing is certain: There is never a dull moment on the cast—it is your go-to for horror and exploitation films and passionate musical guests. You never know what you will get when you tune in.