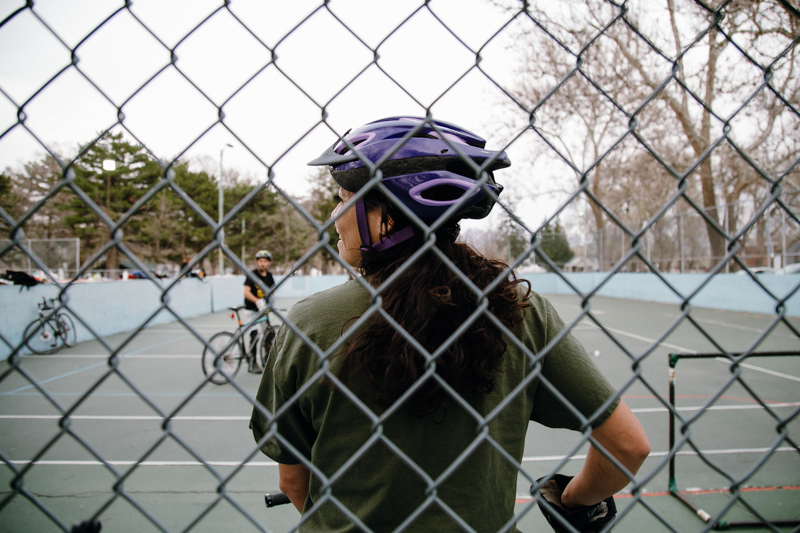 I don’t think I’ll ever quite forget seeing the sport of bike polo for the first time. I remember being at the Downtown Farmers Market years ago and looking over at the tennis courts with a million questions. There were bikes with protective coverings over the spokes, which made them hypnotically intriguing to look at. Riders rode with mallets, simultaneously competing in an intense, fast-paced game. It was the Beehive Bike Polo Club in all of their grassroots glory. The Hive have become one of the most well-known communities of polo players in the country and have been expanding the presence.

I know what you’re thinking—how on earth do I get on with these maniacs, riding bikes, wielding mallets and smacking a ball around? Well, according to integral members Anthony Woo and Treasurer Eryn Sacro, all you have to do is show up to the Jordan Park courts ready to go, with open arms to accept what lies ahead. If you go to Beehive Bike Polo’s website, you can get a lay of the land of the game and some gear you may want to pick up. To give a quick 101, the games are usually three-on-three and start with a joust on—or race to the ball. From there, the game goes—with no set positions—with a common goal in mind, to hit the ball into the opposing team’s net. It’s fast-paced, but with the support of other players and the club as a whole, newbies are always welcome to try their hand.

“You can either be a really serious player who wants to get involved in all of the tournaments and travel and excel in the leagues, or you can take the laid-back approach, and have fun and drink beers with your friends.”

The Beehive Bike Polo Club’s usual turnout is roughly 30 consistent members per gathering. New and old faces drop in periodically, and there are plenty of people to get you going in the right direction. With the recent move to a steady, safe and comfortable place to play at Jordan Park in late 2017, the club has been taking advantage of the privilege by holding several tournaments including the upcoming NAH Southwest Regional Qualifier Tournament right here in Salt Lake City. The creation of polo courts at Jordan Park have had a huge impact on the success of not only the bike polo club but also the broader community. The courts inspire some other leagues and the public, in general, to get involved and get outside.

Players can take the sport as far as they want. “You can either be a really serious player who wants to get involved in all of the tournaments and travel and excel in the leagues, or you can take the laid-back approach, and have fun and drink beers with your friends,” says Sacro. No matter what your end goal is, the Beehive has your back.

Their courts were the old tennis courts of Jordan Park, which BBPC repurposed by taking down the net and building their own enclosure to form the courts. They have further plans to make the courts a permanent home and optimal for polo. “We’re still pursuing an actual refinish of the surface and getting an  actual permanent enclosure—something that will last a lot longer than wood,” says Woo. “The ideal goal will be to get something akin to the hockey courts you see all over Colorado.” Water tends to damage wood courts, and the Colorado courts they look to emulate are made of hearty fiberglass. Beyond being awarded grants to fund it, “We throw events and tournaments to try to raise some money, and that all goes toward our club funds to help with facility costs,” Woo says.

“We have a bunch of WTF (women, trans, femme) members, and [we] pretty much welcome anyone to play. Whether you’re religious or not, or sober or not, just show up and be nice, and you have a place to play here.”

The Beehive Polo Club is “as unstructured as a structured club can be,” says Sacro. Having a treasurer, however, gives the club the stability to run some funds and help grow the club, as they did when awarded a grant from the Utah ZAP program for the first phase of their courts’ conversion. “Another ultimate goal we have is to start our youth bike polo program,” says Woo. The BBPC gained 501(c)(3) status toward the end of 2018, and look forward to further growth that being a nonprofit may facilitate.

Beehive Bike Polo Club attribute a lot of their success to its tight-knit community. Not only do they compete and play polo together but they are also really great friends as well. Bringing an open mind and open arms to the sport is also something that has contributed to its success. “We have a bunch of WTF (women, trans, femme) members, and [we] pretty much welcome anyone to play. Whether you’re religious or not, or sober or not, just show up and be nice, and you have a place to play here,” says Woo. The Beehive Bike Polo Club’s notoriety also comes from the dedication of the members within the club. Woo and Sacro both mention some of the club’s members, such as Tina Medley Greene and David “Dove” Barthod as some of their more experienced and integral members to the club.

Both Woo and Sacro have extraordinary personal experiences with the sport and all of the places it had taken them. Amid traveling to participate in BBQ tournaments in Kansas City and international tournaments in Puerto Rico and Colombia, bike polo culture is equally strong here in SLC and worldwide. If you’re interested in playing or getting involved any other way, the Beehive Bike Polo Club uses social media platforms such as Facebook and Instagram to get the word out. The Southwest Regional Qualifier Tournament is June 8 and 9, and BBPC are deliberating what their next tournament will be after that, which will take place early to mid-fall.