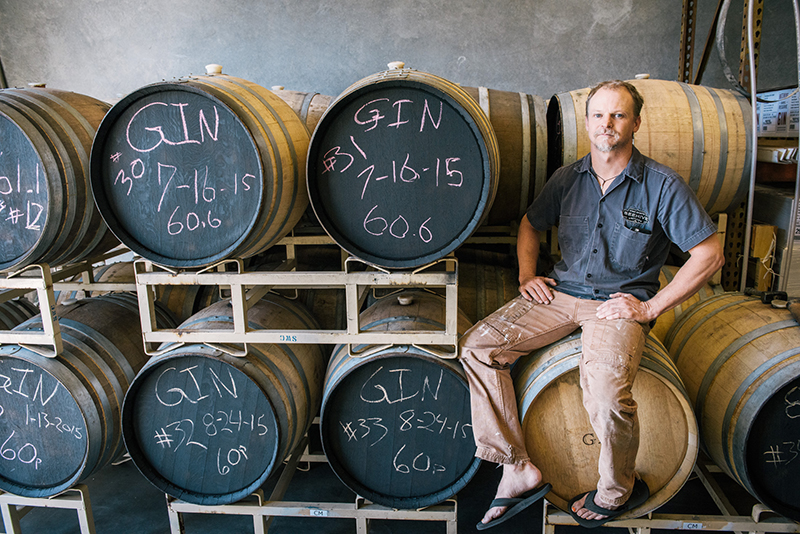 Beehive Distilling: Out of the Bathtub, Into the Barrel

Few spirits are as diverse and distinct as gin. Once maligned as the Christmas tree–flavored outcast in parents’ liquor cabinets across the country, this piney, aromatic punch of booze has risen to the fore of the craft cocktail movement, and for good reason—behind gin’s characteristic juniper aroma lies a frontier of botanical bouquets and intricate flavor profiles. Under the craftsmanship of distiller Chris Barlow, Beehive Distilling has been slinging their aptly named Jack Rabbit Gin and its barrel-aged variant in Utah’s burgeoning booze scene since 2014.

Barlow, a photographer who settled in Salt Lake in the ’90s, nabbed Utah’s fourth distillery license in January of 2014, and, together with fellow photographers Erik Ostling and Matt Aller, opened Utah’s third legal—and only gin—distillery since 1870, after High West in Park City and Salt Lake, and Ogden’s Own. Coming from artistic backgrounds, the three partners landed on gin, a spirit that allows for creativity and artistry to shine through, more so than with vodka and whiskey. “Gin was one of the things where we could make our own flavor,” Barlow says. “You can do so much with it. You can be so creative with it.” Also, unlike an aged spirit, a good gin can be made in a matter of days. “We could make something unique, something creative, and we could go to market with it very quickly,” Barlow says. After more than two-dozen test batches, Barlow struck on the ideal blend of botanicals for Beehive’s flagship gin. While some gins boast dozens of ingredients, Beehive employs just seven: coriander, grains of paradise, orris root and Albanian juniper—which are cold-macerated overnight in a neutral corn spirit—and lemon peel, fresh sage and rose petals, added in a column-still distillation process. The result: Beehive’s Jack Rabbit Gin, a clean gin with nothing to hide. Piney juniper soars to the spirit’s forefront, followed by crisp citrus and floral rose—leaving a trail of rosy, welcoming warmth. “We wanted our Jack Rabbit to be more traditional,” Barlow says. It’s a classic London dry gin, though its fresh sage notes reflect a Western twist. Stirred, shaken or neat, Jack Rabbit holds its own among the Bombay Sapphires and Tanquerays of the world.

Whether with citrus, fruit juices or other herbal liquors and sprits, gin shines—especially so for one as well-made as Beehive’s Jack Rabbit. “Gin has been a forgotten spirit for a long time,” Barlow says, “and just with the cocktail revival, gin’s the base ingredient for half of the traditional cocktails.” In fact, there isn’t much that you can’t do with gin, explains Barlow, save freezing it (it’ll lose its aroma) and drowning it in orange juice or cheap tonic. “Everything else you can do with gin,” he says, an encouragement to Salt Lake’s skilled bartenders and home hobbyists alike.

Branching out into the world of gin aging, Beehive has also fashioned the Barrel Reserve—the same botanical gin aged in charred wine barrels for nine months. “The three of us love whiskey, but we didn’t have time to wait around for a whiskey to age,” Barlow says. “We wanted something like a whiskey, an on-the-rocks kind of sipper.” Still carrying the herbal sage and juniper crispness of the Jack Rabbit, the barrel-aging process imparts warm vanilla and oak tones to the Barrel Reserve, enhancing its floral aroma and imbuing the already precious liquid with an amber hue. It’s a fantastic sipper, and it’ll add a surprising depth to an array of cocktails both classic and contemporary—for the daring mixologist, substitute it for whiskey in a Manhattan or an Old-Fashioned. Because the barrels come from a variety of vineyards in Napa, Calif., the gin’s flavor profile varies from batch to batch. “I know people who’ve bought every bottling that we’ve done with that, and so they’ve got six different bottles of it sitting there, and they’ll geek out and taste them back and forth and taste the differences in them,” Barlow says. “I just drink it.”

In August of 2014, Barlow and his partners threw a party at The State Room featuring live music from Charles Ellsworth, Vincent Draper and Six Feet in the Pine, and introduced Jack Rabbit Gin to Utah’s libation enthusiasts. Three classic gin cocktails—the Negroni, the Gin Fizz and the Martini—invited attendees to explore Beehive’s entry into Utah’s liquor scene. You can often catch Barlow at such events, sharing his passion for gin’s alchemical secrets over a tasty drink. “Everyone’s been really receptive,” says Barlow, who adheres to the notion that the best kind of marketing is reaching out personally into the community. “[At events], you can meet people, talk to people and explain what you’re doing,” he says. “You’ll always get the one who’ll say, ‘Well, I don’t like gin,’” to which he’ll reply: “‘Well, this isn’t the ’60s when we stole the gin from Mom’s cupboard. This is kind of a different gin.’” Previously staunch attitudes have quickly eroded over the past few years in Utah as well. “Utah’s been good overall, really,” he says. “Everybody thinks that it’s this horrible liquor state, but there are states out there that are worse.”

Overall, Barlow is pleased that Utah’s local booze scene is finally catching up with the rest of the country and that Beehive Distilling can supply the growing demand for well-crafted gin. “Drink lots of gin,” he says. “Gin in excess.” You can purchase Beehive Distilling’s Jack Rabbit and Barrel Reserve gins in state liquor stores across Utah.