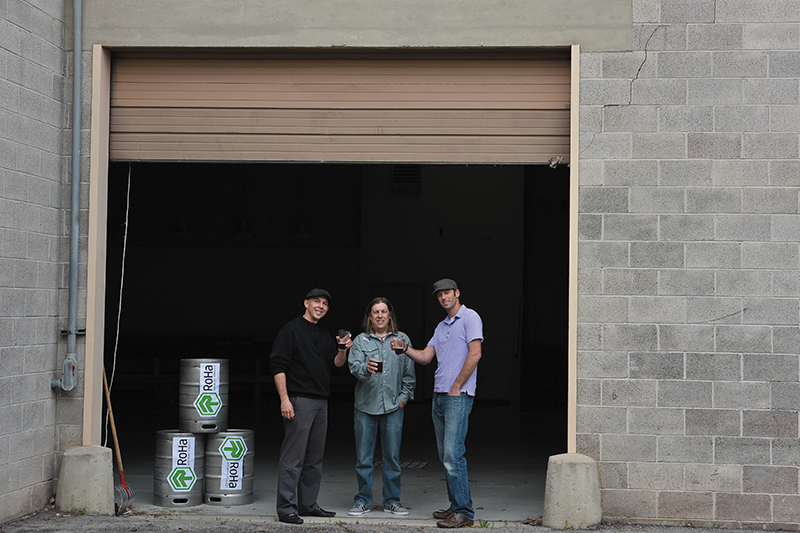 You don’t have to be a member of the Algonquin Round Table to figure out that craft beer is blowing up across every region of the Beehive State. Just look at store shelves or glance at a bar menu and you’ll see local beers peppered across the pages. Those beers will soon have company, as new breweries and concepts of what breweries could be continue to emerge across the state. One such brewery that is changing perceptions of beer is the RoHa Brewing Project. Chris Haas is the Brewmaster and one-third of the partners involved in RoHa. If you’ve been a student of Utah’s craft beer scene, his name will be familiar. Simply known as Haas, he has been the Brewmaster at Trolley Square’s Desert Edge Brewery for well over a decade. Haas has won dozens of awards, created the popular Desert Edge Beer School and organized monthly outings that educate people about beer, food and culture. When it comes to beer, there are few people in the market who understand the nuances that make craft beer so successful in Utah.

RoHa Brewing Project may sound like an unusual name, but it’s all quite simple. Like many business names, RoHa is a mashup between the original partners Rob Phillips (Ro) and Chris Haas (Ha). Soon after the inception of RoHa, Phillips and Haas realized  that they needed someone in their camp who knew the people side of business. “We needed a third partner, and we approached our friend Josh Stern to join us,” says Haas. “It’s worked out pretty well. We all bring different things to the table: Josh brings sales and his social prowess, I bring the brewing part, and Rob—being an engineer—brings his important skills to the brewhouse, taproom and bottle shop.”

To ensure RoHa’s chance of competing in the market, the boys knew they needed to set up shop in an underserved area of Salt Lake City. They found their spot in the South Central end of Salt Lake. With Smith’s Ballpark a couple blocks away, Salt Lake Community College South Campus around the corner and walkable distance from surrounding neighborhoods, “It’s practically a neighborhood brewery,” Haas says. “We wanted a location where we could sell our beers out the door and enjoy them in our taproom without being on the edge of Salt Lake City’s industrial area. Kensington Avenue offers that alternative to Downtown.”

Starting a brewery from scratch might be challenging, but Haas says, “I think the making of and selling of beer are very simple things. People tend to make it more complicated than it needs to be, and I’d rather simplify it. Getting the permits, contractors and licensing is hard—the beer is easy.” Haas is no dummy—he knows Utah’s beer scene. His time as Brewmaster with Desert Edge has provided him with a market perspective that few locals possess. As more and more breweries emerge vying for consumer dollars, Haas has a determination that’s as much personal as it is professional. “I need to know if I can succeed or fail at this on my own,” Haas says.

RoHa will produce fervently anti-gimmicky beer. “You hear all these terms floated around that are completely bogus,” Haas says. “‘Fire-brewed,’ ‘triple-hopped,’ ‘frost-filtered’—those aren’t real things. We need to get people away from those marketing-driven terms and educate them on the reality of beer.” Sometimes customers don’t want to be educated. They want what they want, when they want it. It’s a tough juggling act, keeping customers happy while impressing upon them the importance of craftsmanship and quality. “We’re just going to concentrate on making good, solid beers and try to educate people on what that means,” says Haas. “No mild ales at 7 percent, no IPAs at 3.5 percent—just true-to-style pale ales, lagers and easy-drinking dark beers. Well-made beers is what we hope will keep our future customers happy.” One way in which the RoHa boys plan to keep us happy is through packaging, filling 22-oz. bottles and 12-oz. cans. They can strategically insert themselves into the market and make packaging changes on a week’s notice, not a year’s.

RoHa Brewing Project is set to open its doors by the end of summer 2016 at 30 E. Kensington Ave. in Salt Lake City. Look out for beers of all styles in the 4-percent range up to the stratosphere range. Phillips, Haas and Stern hope to put a fresh spin on old brewing concepts through simplicity, attention to detail and the desire to be the masters of their own destinies. Ideally, the boys from RoHa hope that this small regional brewery will find an audience from within as well as outside of Utah borders, but they stress, “We will always be a Utah brewery first,” says Haas.

For more information on the project’s development, visit rohabrewing.com.