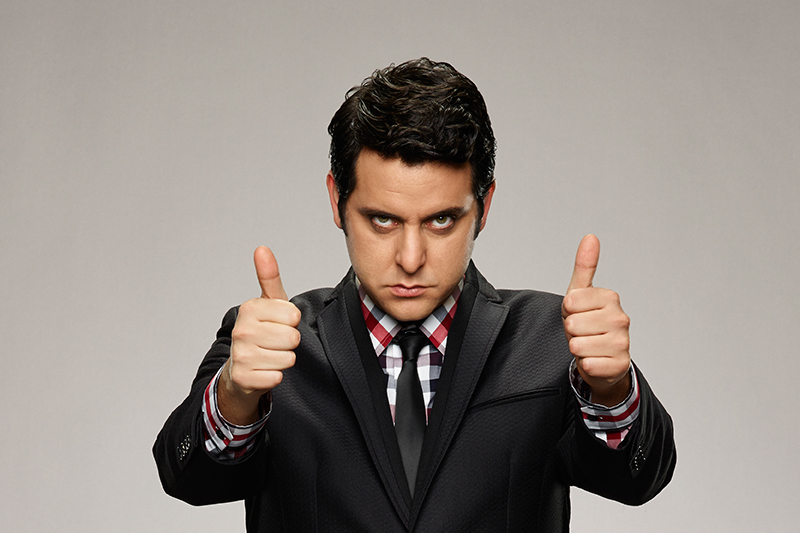 Ben Gleib might mock people's fashion, but he prefers to make comedy out of people's idiocy.

From regular appearances on Chelsea Lately to voice acting gigs on Ice Age: Continental Drift and The Book of Life, comedian Ben Gleib has kicked all kinds of ass. Currently, Gleib is the host of GSN’s Idiotest, which affords him plenty of opportunities to poke fun at people who are not as smart as they think they are. Before he takes the stage at Wiseguys in West Valley this weekend, Gleib was generous enough to chat with SLUG about the Dalai Lama, voice acting and his newfound opportunities to shatter the dreams of idiots.

SLUG: How did you get your start as a comedian?

Ben Gleib: I’ve always been a comedian in my brain. I knew comedy was what I wanted to do at about 7. I started with open mics like everybody does, and after a year and a half, I got a real lucky break. I was asked to start producing and host the college night at the Laugh Factory, and I suddenly found myself working with some of the best comedians around. I had to step up my game taking the stage with people like Dave Chapelle, Dane Cook, Chris Rock, Daniel Tosh and Sarah Silverman.

SLUG: Will this be your first time performing in our fair state?

Ben Gleib: No, actually. I did a tour of a bunch of colleges in Utah about nine years ago. My first album was recorded at Utah State University, actually. I’ve also done guest sets at Wiseguys in Salt Lake City.

SLUG: I imagine that each state offers something unique to make fun of—Utah’s really no exception. Do you do any kind of preparation regarding funny stuff about a particular state?

Ben Gleib: A little bit. I prefer to make fun of the individual people at the show. I know that Utah offers a bit more in the way of interesting lifestyles that I probably will be mentioning for sure.

SLUG: You’re currently the host of Idiotest on the Game Show Network—how did you land that gig?

Gleib: I never thought I would become a game show host, but over the years, GSN had been reaching out to me. I’d hosted little things on their network. I grew up watching game shows and still watch them now, so it became a cool prospect to be able to step into that world. Idiotest came along, and they just offered it to me.

SLUG: That particular game show seems like a good match for your style of comedy.

Gleib: It was a lucky match for sure. A big part of my comedy is following the logic of individual people, poking holes in it and then making fun of it when the logic breaks down. I also love that GSN has let me be weird and out of the box on the show. I think I host the show stranger than other game show hosts would. Each episode is like an improv comedy special mixed with a game show. It’s a blast to do that every single week. Making fun of what people are wearing at one of my shows is fun and all, but making fun of the way peoples’ minds work is a lot more rewarding. People are pretty committed to thinking they have a good, strong mind, and I like to shatter those dreams.

SLUG: I understand that you recently had an opportunity to meet the Dalai Lama. Who’s more interesting: him or Chelsea Handler?

Gleib: (Laughs) The Dalai Lama is inspiring, but he shoots straight from the hip and doesn’t try to mess with your mind. Chelsea Handler is also a straight shooter, but she really enjoys mind games and occasionally lying to her friends in order to create psychological impact. Chelsea is definitely more interesting in the way she keeps you on your toes. You can relax around the Dalai Lama because he’s not going to screw with you.

SLUG: Your career has also included some voice acting. How do you manage to infuse personality into an animated character?

Gleib: That’s been another amazing career turn that I didn’t anticipate, and I’ve gotten so much joy out of it. You get to infuse your personality into it much more than you would think. I realized that what they want is a unique personality to shine through when playing these characters. Most of the characters I’ve done have been my personality—maybe a more exasperated or excited version, but I get to be myself and improvise. You don’t have to present your face or body onscreen, so it’s more freeing to be in this dark booth by yourself and just become a cartoon. It’s a fun experience, and it came pretty easily, actually. When I did the Book of Life, I was actually a recast after they had already animated my character. I had to match the lips of the character that was already animated. That was a ton of fun! Certain lines that I improvised, they actually went back and re-animated certain scenes to match the jokes that I made up.

SLUG: With shows like Last Week Tonight and The Daily Show, the public seems to prefer their news delivered by comedians—you’ve even appeared on CNN and NPR to offer your take on today’s politics. What does that say about today’s news environment?

Gleib: I think it says a lot about our current news environment. You see people like Brian Williams who have become much more about image or being a showman rather than an arbiter of truth and a seeker of the true story. Comedians have it in their blood to tell the truth. A good joke is usually based in truth and is good at pointing out the hypocrisies of the world in a way that is very palatable. I think people intrinsically recognize that comedians are telling it like it is, whereas news reporters these days have the spin of their whole network’s point of view pushing behind them. I think the key thing these days is that people get a real sense of what’s authentic and what’s not through social media. People can tell if you’re being sincere or if you’re focus grouping what you put out there.

SLUG: What are some future projects that you’re excited about?

Gleib: I’m on a perpetual tour as a comedian, but this year especially I decided to hit the road really hard. People can find all the dates at #bengleibworldtour2015 on Twitter or Instagram. Right after Utah, I’m going to the Pemberton Music Festival in Canada and then a week headlining in Vegas. I recorded a standup comedy special recently that we are looking for a home for. I’m also developing a couple TV shows that I hope will debut in the near future. You can catch Gleib’s show at Wiseguys in West Valley on Friday, July 10, and Saturday, July 11. He can also be found on Twitter @bengleib and on the Smodcast Network with his podcast Last Week On Earth.