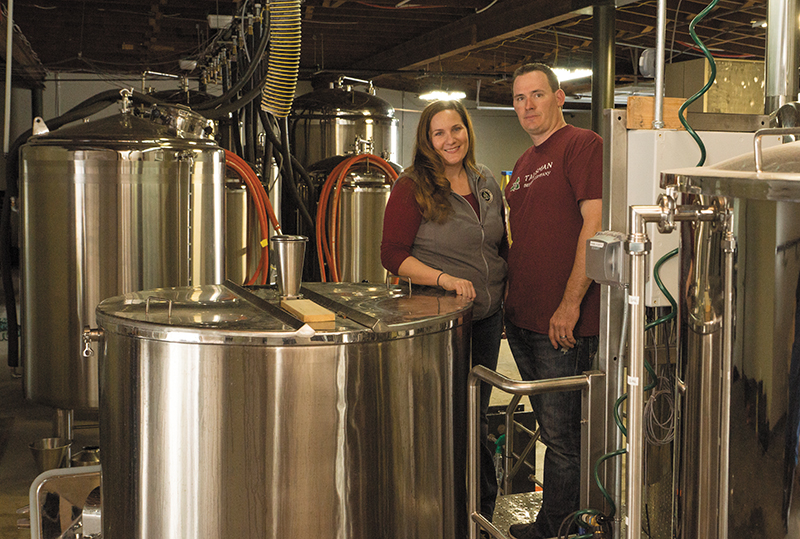 Walking in the front door of Ogden’s newest brewery, Talisman Brewing Company, I’m hit with a deliciously sweet smell that seems familiar—though I’m not sure from where. Dusty Williams, who co-owns the brewery with his wife, Joann Williams, tells me that they just got finished brewing a beer with hops—those zesty little strobuli that impart a flavor that is sometimes bitter, sometimes citrusy. They call this beer The Dagda, which—inspired by William’s Welsh heritage—is named after a Celtic God. “Dagda is the protector of the crops,” says Dusty. “He’s the god of all gods. For us, it was kind of a no-brainer, the protector of the crops—it’s a hoppy beer.”

Making beer is actually quite simple and organic, despite the fancy tools needed for high-volume production. Simple as it may be, it is definitely not easy. It requires trial and error as well as a certain finesse to get it right. One can brew quality beer at home, and Williams started out doing just that. He got his start by homebrewing, gave that out to friends and found that he was quite good at it. “Many people told us they would buy my beer,” says Dusty. “By law, you’re allowed to homebrew up to 100 gallons per person of age 21 or older in your home. I was maxing that, for sure.” After about eight years of brewing beer at home, Dusty and Joann decided to create their own licensed brewery. They named it Talisman after a tangible object that a person carries to bring good fortune. But after speaking with him about brewing, Dusty shows that he isn’t relying on luck. “Everybody kind of has their thing that catches their eye and that they love,” says Dusty. “I was so intrigued by brewing and the science behind it.” Dusty added, “This is truly just a passion for me. I would love to do it full-time.” Dusty splits his time at the brewery with his work at Hill Air Force Base.

Talisman Brewing Company is smaller than some of the other breweries in Utah, so it is easy to see how Dusty and Joann’s personal touch is in every bottle they sell. Although a number of people are involved in the process, just about every bottle of Talisman beer was held by Dusty or Joann at some point, hand-numbered and then shipped out. They also offer tours of the brewery and the brewing process. “You can expect to get educated,” says Dusty. “Sure, you’re going to get to taste the beer, and people kind of like that about it, but I’m going to nerd out a little bit. I want to educate people on craft beer. There’s a reason it’s called craft beer—the hands are so involved.” Participants in the tours can expect to see every part of the brewing process, which will be fascinating even to people who never wondered how beer is made. There are sights and smells that most people haven’t experienced anywhere else. “We take you through the process from the raw grains and malt that we use, and then we go to each station,” says Williams. “As we’re doing that, we will pour beers, talk about the style of beer we’re pouring, how it’s made and the character profile of it. The tour lasts about an hour and a half.”

At this time, Talisman offers six different styles, and Dusty is confident that they have a broad range of tastes covered. On the lighter end of the spectrum is their Kreation hefeweizen. “It’s just a super light, crisp, refreshing beer,” says Dusty. “I like to call it our ‘crossover beer.’ I feel like anybody who is intimidated, scared or thinks they don’t like craft beer—they can come drink this beer and be good.” Beer nerds should be able to appreciate Talisman’s Scottish-style ale, called Uplifted, which has a more nutty, malty profile. What makes it special is that while most Scottish ales on the market are of the “wee heavy” variety, Uplifted is an 80 shilling—a style born in the mid–19th Century from how much money that style of beer used to cost in Scotland. Dusty’s favorite beer is the Promontory Pale Ale. “You’re going to get a lot of citrus and pine on that one,” says Dusty. “It’s really crisp, really refreshing, and you could put back a few of those.” Their darkest beer is the Iron Age oatmeal stout, which Williams says is more of a sweet stout. “You’re going to get coffee,” he says. “You’re going to get chocolate. You’re going to get roasted and toasted notes. It finishes with that silky, creamy finish from the oatmeal.” Bel’s Fury is their red ale. “It’s really malt-forward, with really big mouthfeel and big body,” says Williams. They describe The Dagda, their IPA, as having notes of citrus, grapefruit, pine and pineapple. “It’s going to have a really sweet initial taste, and then the hops will start playing a role,” says Williams.

At this time, Talisman Brewing Company is focusing on session or ABV beers, and this is by design. Talisman has already had a warm reception, with orders pouring in for their six different styles. Their beers can be found in minimarts and other select locations in Northern Utah. Talisman will also be releasing a seasonal brew this summer, though they are keeping mum on what it will be. “We’ve already done a test batch,” says Dusty. “It’s so freaking good.”

Talisman beer can be purchased directly from their brewery beer store at 1258 S. Gibson Ave. in Ogden. Visit their website at talismanbrewingco.com.