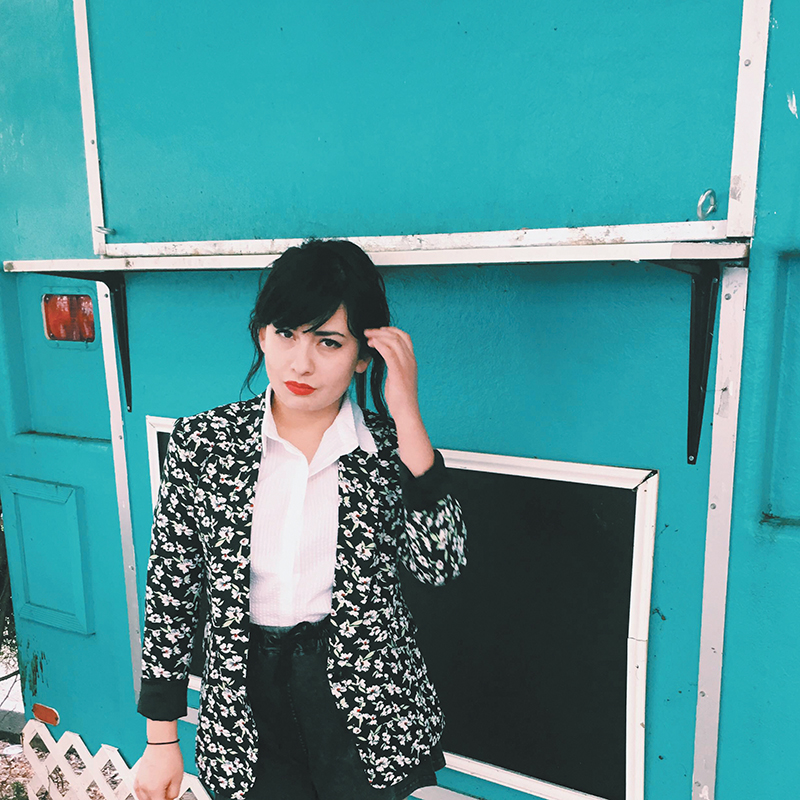 Bianca Velasquez: LocalMotive on the Move

For too many people, the blueprints to starting one’s creative DIY project tend to fade into the ethereal realm of When I Have More Time Land. However, Salt Lake’s own Bianca Velasquez, at just 22, has been involved with ventures across several disciplines. To name a few, she’s the author of Happybutton Cartoons, designer for her custom neon-sign business Neon Bite, an assistant to Piñata TV, the guitarist for Dream Slut, former booking agent at Kilby Court and (as of August 2015) the writer and developer of the blog/journal/podcast/tour-booking mélange  known as LocalMotive.

“LocalMotive is an online platform where I try to bring together start-ups from every state,” says Velasquez. “It’s a place where people can go to promote their passion project and also a place to learn about what’s going on in their area.” Drawing on her past experiences, Velasquez understands that, often, the hardest part about being a new business or an emerging artist is the imbalance between the work put in and the recognition given in return. Regardless of where they might live, Velasquez is on a mission to find these people and share their stories through any means she can. With a quick run-through of her website, you can read her coverage on a number of interesting businesses all along the West Coast. Her DIY approach to covering music is especially salient.

“I got started with the first LocalMotive trip in August to see a band from Albuquerque called The Lymbs and another band named Marma,” says Velasquez.  “I would reach out to bands on BandCamp or SoundCloud and listen to them and see who I wanted to go out and meet.” As for the criteria, Velasquez chose bands simply based on whether or not they sounded excited to talk to her about their work. “I don’t care what kind of music you play,” she says. “If you really believe in something, you’ll find a way to do it, and I like covering people who feel the same way.” Trusting her judgment, Velasquez packed her things and took the risk of driving 14 hours to find people she had never met to ask them to trust her enough to confide the details of their artistic endeavors and to maybe grab a spot on their couch for the night—all without any formal training in music journalism. “In my first podcasts, you can realize that I didn’t know what I was doing,” says Velasquez. “It was an hour-and-a-half long … and most of it was just of all of us shot-gunning beers together … I wanted to talk to bands as if they were my friends.”

Still, the imperfections of a first interview can be easily forgiven, considering the leap she took and the success that followed. Along with making new friends, Velasquez’s trip to Albuquerque gave her the confidence to know that she could do this again, and likely do better each time. She went on to talk with more out-of-state artists like Jason Clackley (Seattle), Ruby Loon (Portland), Corey Medina (Portrock), Rod! and Ladywolf. Though Velasquez still self-describes as an “amateur technician,” each interview feels progressively tighter while maintaining the important feeling of casual interaction.

The last year has been greatly generative for Velasquez, as her trips for LocalMotive (all completed while maintaining a day job, by the way) landed her with useful contacts across state lines. In late May of this year, Velasquez used these connections to help coordinate a tour for local band—and longtime friends—Rumble Gums. Along with her comrade Alethia Rodriguez, Velasquez took the crew to Portland, Seattle, San Francisco and Oakland over 10 days. Of course, her first attempt came with its own setbacks. She had to be the first responder to a myriad of problems, stemming from van break-ins, people management, club owners and beyond. Despite this, Velasquez experienced a new understanding of what touring life can give to musicians. “When you’re out there in that cold water, you realize what you want as a band,” says Velasquez. “Every artist has to go and do that. Even if you don’t make money or exactly get the shows that you want, playing in a new place teaches you so much.”

With the success of Rumble Gums’ tour, Velasquez is continuing to broaden the scope of LocalMotive’s interests by helping more up-and-coming bands book shows outside of their hometowns. In mid-July, for example, Velasquez will be travelling with local psych-rock band Spirit Tribe as they go on their first two-week touring experience. For a low-budget price, Velasquez will do everything to make sure that her artists can focus solely on their music. “I set up the shows; I find opening bands through LocalMotive connections; I create the online events; I create the posters; I reach out to local radio stations,” says Velasquez. “I try and create a tour where everyone can all have fun.”

In just a short amount of time, what started as a personal interest blog has evolved to reflect the extensive capabilities of its creator. Even though the project is still young, Velasquez aspires to keep pushing forward while supporting other creative people and developing herself along the way. For more info, or to inquire about booking a tour for yourself, check out her articles at localmotiveblog.com and send her an email at localmotiveslc@gmail.com.