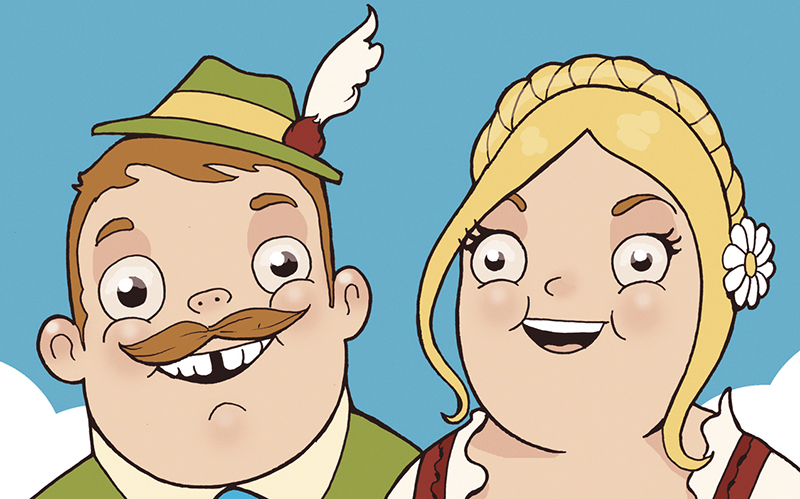 What comes to mind may be generic, American-style macro-lagers before the idea of typical craft beer. Craft beer styles like Northeast IPAs, imperial stouts or U.S.-made Belgian-style tripels continually push the envelope of what beer can be, by contrast. Ironically, though, the lineage of lagers that craft beer–lovers may often neglect could be the perfect launchpad for creativity in the increasingly crowded world of craft beer.

Local lagerhaus Bohemian Brewery has looked to the tradition of what they brand as “old-school brews” simultaneously to innovate and pay homage to their roots. Bohemian Head Brewer Brian Erickson brews true-to-style, classic Old World beers or uses historical inspiration to skew the lines of brew styles for inventive beers. “We still make beer with hops and barley, and we can be making our traditional styles or traditionally brewed lagers with new, exciting ingredients, so I think that’s one place that will always have potential,” he says. “We’ve been doing this for [coming on] 20 years, and we’ve nicked the tip of the iceberg.” Whether the season calls for a more traditional Munich dunkel or for a deep cut, such as Bohemian’s Choose the Rye—a rye lager—Erickson finds a foothold in Bohemian’s lagerhaus identity.

Since 2001, Bohemian Brewery has stayed true to Czech Old World brewing traditions and has increasingly embraced more from all of Continental Europe (Germany, Austria and the Czech Republic). From the Czech Republic, Joe Petras founded the brewery with a handful of core lagers such as their Czech Pilsener, Viennese Lager and Cherny Bock. He strove to make a consistent product that stood on its own like the spare, forthright regional beers in Czechia, paired with wife Helen Petras’ Czech recipes at Bohemian Brewery. According to Bohemian Food & Beverage Director Jeff Labounty, the brewery is one of six or so lagerhauses of its kind in the U.S. Joe passed about five years ago, and his vision of Bohemian Brewery as a bonafide lagerhaus lives on in the brewery’s current incarnation. “We sure never gave up on our classics,” Erickson says.

Toward the end of his tenure at Bohemian, Joe acknowledged that today’s consumers want variety in beer. As Labounty and Bohemian Sales and Operations Manager Will Gillane spur the brewery to offer new product to satisfy this demand, Erickson duly honors Joe’s memory per the lagerhaus guidelines he adheres to when he brews Bohemian beers. The team had discussed how to introduce a more hop-forward beer to their core lineup. “We don’t wanna just jump on the bandwagon and put out an IPA,” Erickson says. “But something that people could critique us for is we don’t make a lot of hoppy beers. We’re not trying to throw away what we do and who we are to make hoppy beers. We went back to the history books and said, ‘What can we do that’s in our realm?’” The Cottonwood Common was their answer. Erickson investigated and articulated a fairly traditional California common brew style, which derives from German-American immigrants’ honest-to-god attempts to brew a traditional lager in California amid the Gold Rush. Higher West Coast temperatures necessitated that they put their boiling wort on the tops of buildings in order for it to ferment as coolly as possible with cool air blowing in from the Pacific Ocean.

For Bohemian’s standards, it’s a hoppy beer that’s also a historical lager. “Boom, Joe would love it,” Erickson says. The beer has a different kind of hop profile, which can taste somewhat akin to a pale ale or English-Style Bitter (per my tasting): “It was also influenced by the type of hops they had at the time. The style’s now [relatively] defined by these hops called Northern Brewer … Those hops have a pretty distinct character, earthy piney—not piney like American-IPA piney, but more of an earthy, subtle piney. Those hops give it a certain character, but it’s also pretty firmly hopped compared to typical lagers, which are either well-balanced or toward the malty end. The California common’s definitely toward the hoppy end.” Though Erickson doesn’t think that hop heads will find the same IBU punch in the Cottonwood Common as with an IPA, he surmises that its character could be the hook to keep them at the brewery to taste the more extreme ends of the lager spectrum, such as with their wintertime doppelbock—and that’s entirely the point of an established lagerhaus like Bohemian.

Bohemian is excited to announce that the Cottonwood Common will be the fourth year-round core beer in their roster available at grocery stores in cans, and will be distributed on tap year-round. This wouldn’t have been possible without Bohemian’s Brewers ’Stache series (whose name jokingly came from MLB/Milwaukee Brewers pitcher Rollie Fingers), unofficially starting with their Noble Hefeweizen three to four years ago, then becoming the Brewers ’Stache in name roughly a year later. As opposed to their Small-Batch Seasonals that cycle through more established styles, the Brewers ’Stache can entail straightforward iterations of any given Continental European style that’s more obscure or difficult to brew, such as their Berliner Weissbier or a dinklebier, made with spelt grain. “When we pick something new, we’re picking something old and putting a new spin on it,” Erickson says. It serves as a testing ground for what Bohemian customers might enjoy, as it can also offer Erickson the freedom to experiment on a batch-by-batch basis. “Ninety-nine percent of our beers are going to be lagers,” he says, but “the point of the Brewers ’Stache is to not be boxed in. There are no rules to the Brewers ’Stache.”

Erickson reaches back in time to serve up brews that educate consumers on beer-brewing history, and corners the craft beer market with these niche beers, which are his own versions of historically based beer. Nor are there any strict regional expressions of style in the Brewers ’Stache series, only the imperative to maintain but update Bohemian’s Old World lagerhaus identity and to create within largely alternative parameters: “There’s a hop we use called Premiant, which is a Czech hop, and it’s super fruity,” he says. “We usually use it to bitter our beers. When you use it to bitter, you burn off that fruitiness in the brewing process, but if you throw it on the end of the beer, you can take that aroma from it, which is something we don’t normally do … [It’s] called a Premiant Sour. It was pairing the sour technique of brewing with a hop that we thought would go great with the sourness; fruitiness and sourness go nice together. That’s an example of something that’s off the cuff. It’s not a tradition—an example of this experiment.” Whatever customers may love has the potential to stick around as a seasonal offering, or make it to the staples, as did the Cottonwood Common.

Cottonwood Common beers hit grocery stores and taps on April 6. Bohemian is to a point where they have about two seasonal or small batches on tap at any given time, and their seasonals often follow the Germanic monastic brewing calendar, e.g. their soon-available springtime helles bock (6.9-percent ABV, in cans) and kölsch (4-percent ABV, on draft and in cans); and the Brewers ’Stache will soon switch to the Session India Munich Pale Lager (on draft at Bohemian). Pound for pound, Bohemian’s long-game strategy has secured their place as one of the mainstay breweries of Utah. With their foundation, the beer that they’re poised to make as a measuredly experimental lagerhaus is and will continue to be at the fore of countless, seldom-brewed possibilities. “Whether you’re reviving dead traditions or whether you’re putting a new spin on awesome traditions, that never ends,” Erickson says. “There’s no end in sight—you can do that all you want.”