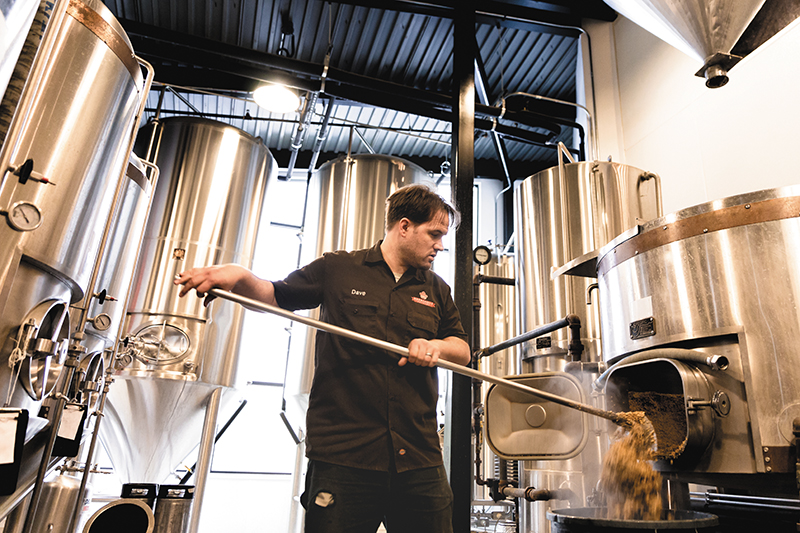 Truly, ours is a golden age of craft beer. Every time I go on a beer run, I see something new. There are more quality craft brew selections in the valley than I can count. And that may be the most awesome true sentence that I’ve ever written. What a time to be alive!

Tooele’s Bonneville Brewery and Midvale’s Hoppers Grill & Brewing Co. may have flown under some of our radars in the past, but both brewpubs are about to take a big step toward wider exposure for their award-winning suds. Brewmasters Dave Watson of Bonneville and Donovan Steele of Hoppers are excited to soon get shiny, new toys to play with—and if we’re patient, we’ll get to play with them, too. As you read this, both breweries are hard at work installing brand-new bottling lines, and both hope to begin providing their bottled beers to the public by mid- to late summer.

Bonneville will be offering their brews in the standard 12-oz. bottle, with six-packs and cases. “We’re probably going to roll out four brands initially,” says Watson. The first two will be the Free Roller Session IPA and the Redline Irish Red—both 4-percent ABV. “[Free Roller] is a classic Utah session IPA,” says Watson. “It uses a lot of Zeus hops, so it has a real classic-American, piney-and-citrus character to it. Our Redline Irish Red was our first seasonal beer. It was well-received enough that when it went offline, they wouldn’t leave me alone until I made it full-time.”

Bonneville’s new bottling line is fairly modest, reflecting the quality-first approach that you’d expect from a small craft brewery. “We’re buying a Meheen, which is a really popular, small-scale bottling line if you’re like us, primarily a draft house making your way into bottling,” says Watson. Epic Brewing Co. and Proper Brewing Co. also bottle their suds with a Meheen.

“It’s a six-head filler—takes like two people to run it,” says Watson. “Up to 40 bottles per minute is the production rate.” Bonneville’s bottles will be available in the big grocery stores by late summer. They’re also erecting a refrigerated building onsite, and Watson hopes to offer cold bottles in-store in the near future. “One of the major appeals of having the bottles in-store … is you can pick up a six-pack of whatever the new high-point beer is, and it’s been in a refrigerated state its whole life—that’s as fresh as you can get it!”

Hoppers Brewery, too, plans to offer cold bottled beers in-store. They have a big fridge and their DABC packaging agency privileges—all they need are the bottles. Brewmaster Steele has settled on 750-ml. “champagne bottles” for his high-point brews. “We’re just going to bottle one batch or two [in late June],” says Steele, “Then, later on in the summer, bottle up maybe one or two more batches. That might be all we do , so it’s pretty limited.” Hoppers bottled their beers for a time, back in 2012, but new ownership and popular demand have them reviving the line. “On the beer side, the production has gone way up, so it’s great,” says Steele. Hoppers’ big bottles may be available at state liquor stores eventually, but early adopters will want to come into the pub and buy their cold ones from the man himself.

Steele, who has been Hoppers’ Brewmaster for a decade, is the only full-time employee of the brewery. “I take it very personally,” says Steele. “It’s my art and my craft. We’re very, very small—our footprint for our brewery is about 500 square feet. The [bottling] line itself is like two by two feet—I bet it’s the smallest one in the state right now.”

For the first batch of big bottles, Steele has decided on their Summerset Saison. This pale ale will come in at around 7.5-percent ABV. “It’s got a nice malted backbone, but it also finishes kind of dry,” says Steele. “It’s juicy and rustic, [with] a little bit of bread flavors. We’re going to use some dry hops in it, too.” Steele plans to bottle another batch for the winter months. “It’s looking like it’s going to be our SnoAle,” he says, “Which is a really great French Bière de Garde–style amber beer. I think it sits right around 8-percent alcohol.”

Being able to bottle your creations for customers is an exciting step for a small local brewery, but the real treat for these two brewmasters is the opportunity to experiment with new brewing possibilities. “Obviously, I can’t make any high-point beers on draft,” says Watson. “So having the [bottling line and] packaging option really opens up that door, so we can start exploring styles that have been literally off limits for us.”

Beer in new bottles is good news, but new beers in new bottles is even better. “That’s the whole reason this craft beer thing exists: variety,” says Watson. “The more variety there is, the more [craft beer] fulfills itself.” In other words, the more bottles of beer on the wall, the better!

To stay up-to-date with Bonneville and Hoppers’ new offerings, visit bonnevillebrewery.com and hoppersbrewpub.com. Their beers hit shelves in the coming months—take one down and pass it around!