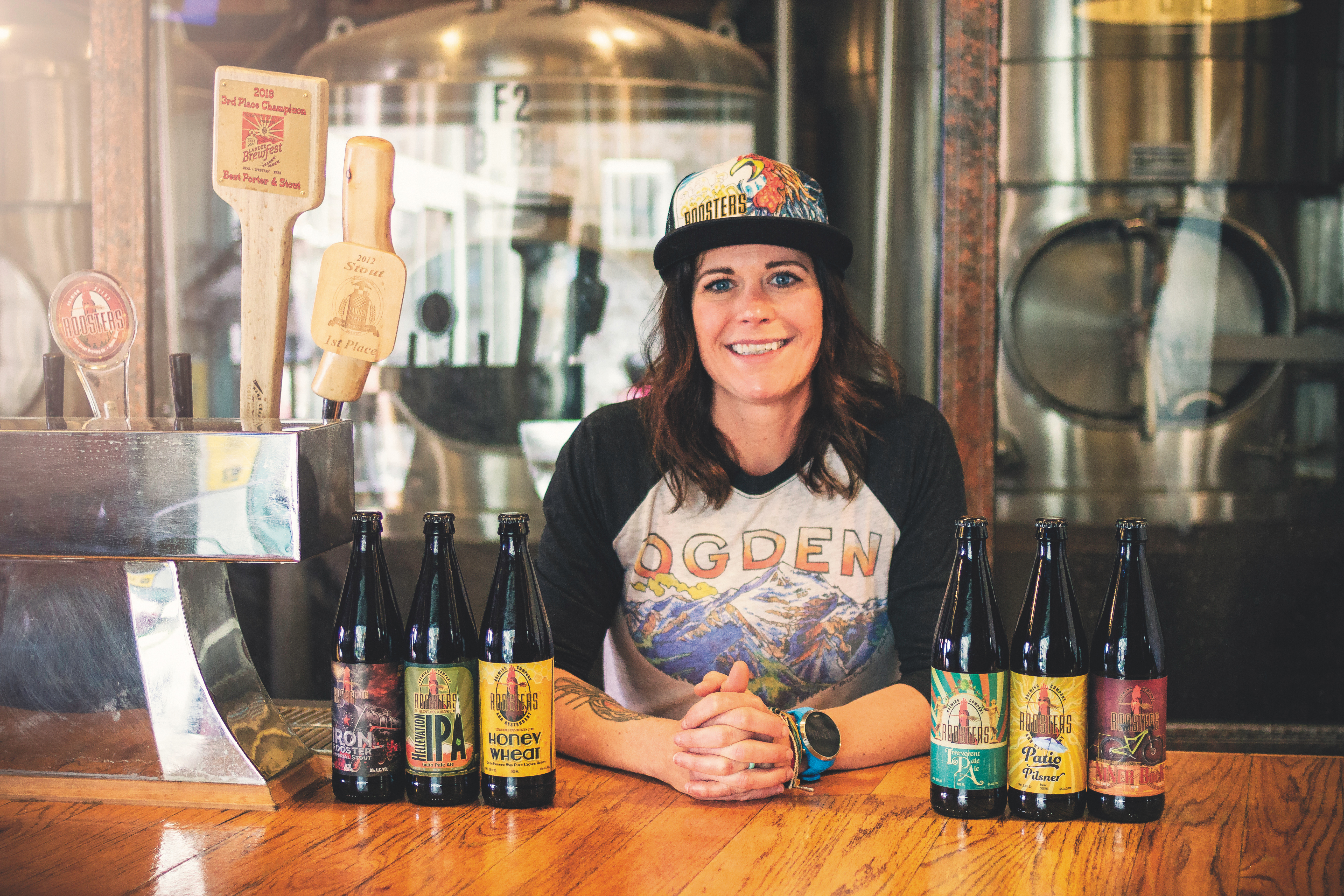 Jacquie King Wright rules the roost at the 25th Street brewery and looks forward to being more involved at the Layton location as the company grows.
Photo: Talyn Sherer

Roosters 25th Street Brewing Co. is part of the old guard of Utah’s breweries. It occupies a century-old building (built in 1890) on Ogden’s Historic 25th Street and has been helmed by Brewmaster Steve Kirkland since it opened in 1995. Roosters opened a second brewpub in Layton in 2005 and has plans for a new production brewery to break ground this summer. But perhaps their most cutting-edge move happened last June when they promoted Jacquie King Wright to the 25th Street Head Brewer position. Her fresh perspective is just what is needed to take Roosters into the next era.

Though Wright began home-brewing more than 13 years ago, her rise in the professional brewing industry has been meteoric. Once she put her mind to it, she managed to achieve a lot in a short period of time. “Three years ago, I just decided this was what I want[ed] to do and started apprentice brewing here [at Roosters],” says Wright. “Two years ago, I quit my full-time job and bartended here until I proved myself and got the position. So [it was a] leap of faith, and it paid off for me.” Now she rules the roost at the 25th Street brewery and looks forward to being more involved at the Layton location as the company grows.

Her childhood, living with her military family in Germany, exposed Wright to a culture where beer and social drinking is normal. This early influence, coupled with her love of history, gave her an appreciation for all things “old school” in beer. Her approach now, however, is decidedly “new school,” with an eye to the future of brewing. “I am definitely more adventurous,” says Wright. “Steve [Kirkland] is a purist, which is awesome, but it’s nice to have someone who wants to do the trendy beers. You have to have the classics, but I have the ability to experiment here.” Wright will continue to brew the four core draft beers offered at Roosters: Honey Wheat, Irreverent Pale Ale (IPA), O-Town Nut Brown and Junction City Chocolate Stout, but there are two seasonal beers for her to play around with. She can choose from the long list of existing Roosters recipes or do something completely different.

Wright recently brewed a coffee stout, Roosters’ first, and looks forward to venturing down other paths not previously undertaken by the veteran brewery. “I really like doing SMaSH (single malt/single hop) beers,” she says. “It shows you the flavors of strictly the malt and hops. It’s hard to hide things.” Her imagination runs wild with thoughts of doing a fruity IPA or a kettle-soured beer. She also has ideas for improving on the well-worn recipes. “I would like to mess around with the hops on some of them [and] make them a little bit more current. There are so many new hops out there!”

As a female brewer in a predominantly male industry, Wright is especially excited about her most recent project and her first high-point beer, Femination American Ale. Roosters boasts a group of tough women, including the brewer and the label designer, making this American “strong” ale the perfect nod to the strength and power of women, not just in the beer industry but in our world at large. “With the state of everything going on, we wanted to support women and raise them up, bring them together,” says Wright. The dark, earthy beer fills a gap in Roosters’ current lineup by providing a full-strength amber/brown made with midnight wheat, rye and spicy Helga and Aurora hops. Weighing in at 7.5-percent ABV, Femination isn’t made for chugging, but it’ll be highly drinkable.

Made by a woman in tribute to women, Femination coming out of Utah is significant, given the state’s conservative reputation and the population’s proclivity for patriarchy. Despite that, Wright feels that Utah’s brewing industry tends to be welcoming to women, which may have something to do with the community’s shared challenge of doing business in a less-than-alcohol-friendly state. “We have so many forces against us here as brewers, male and female,” she says. “It sort of levels the playing field. It’s almost like a big family. Everyone’s about raising everybody else up, rather than judging.” Outside of Utah’s tight-knit brewing community, things are a bit different. “Most people are so amazed that a woman made beer,” says Wright. When they have questions about the beer, people tend to default to the man pouring beer at festivals. But, the truth is, women are on the rise in the brewing industry. There has always been a significant female presence in marketing and sales, but these days, there are a lot of women CEOs and quite a few more female brewers. Additionally, “I think it’s about time that people start marketing beer specifically to women and not [only] as ‘chick beer,’” Wright says. “Realize that we have discerning palates. Market an IPA to us. Market a barleywine to us. Realize that we’re going to drink all these beers.”

With women like Wright taking the industry by storm, this is only the beginning. Chances are her story of success will be repeated by other ambitious female brewers. Wright has some advice for women thinking about entering the field: “Go for it!” she says. “Don’t be afraid to follow your dreams and just get into the industry. If you like beer, then do it!”

Jenni Shafer is one half of the blogging duo Crafty Beer Girls. For more information, visit craftybeergirls.com.