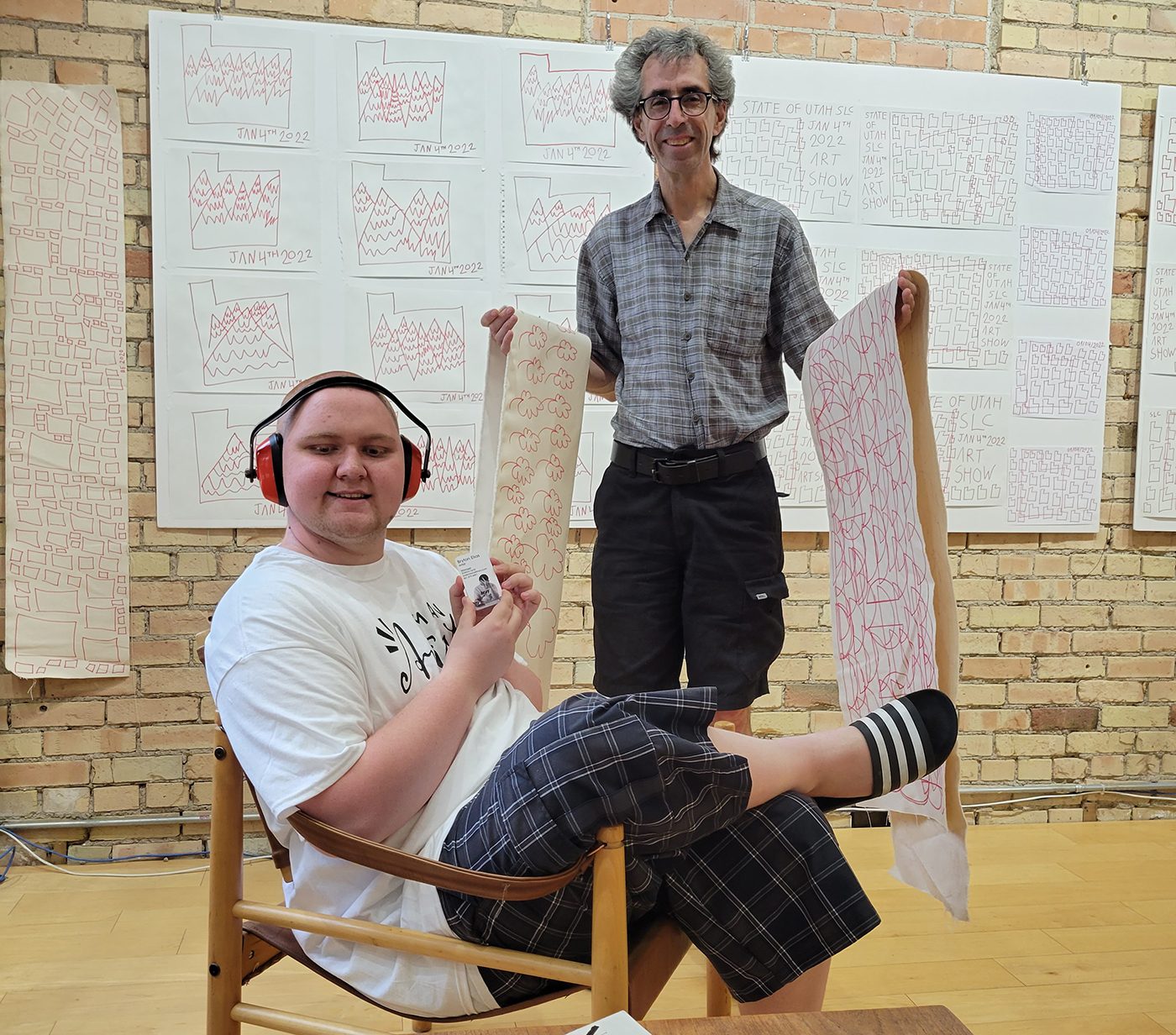 Bryton Elias: The Artist and the Line

Emerging artist Bryton Elias expresses his personal energy and appreciation of Utah’s infrastructure in his freehand line art. The repetitious symbols are drawn primarily with a signature red Sharpie, of which he’s gone through hundreds. On repurposed canvas or foam core, the decisive shapes are drawn by the thousands. The shapes Elias draws—shamrocks, gift cards, the University of Utah “U” and the state of Utah—are as much about abstraction as they are about representation. For Elias, the shapes emanate from childhood memories and personal freedom granted from within one’s own head.

As a talented artist who works in abstract painting and realist drawing, Kristina Lenzi noticed Elias’s talent while teaching at the Canyon Arts School District. “After going to a few art visits with him, I saw his love for art and that we were kindred spirits,” says Lenzi. A friendship formed and Bryton’s mother Jami Jentzsch agreed for Lenzi to meet with Elias regularly for studio time.

They would meet every Sunday, beginning with 15-minute sessions that soon became hours long. Elias—who is on the severe end of the autism spectrum and nonconversational—and Lenzi would work on their pieces, a few intermittent murmurs between them, blank canvases filled with lines of their own styles. “Sometimes he would imitate my art just to get started, but then he would push it aside and do his own thing,” Lenzi says. The effect art has on Elias and the effect that Elias has on art is clear to all that witness it. “He comes home from the studio in a whole different state from when he went in—different … lighter,” Jentzsch says.

“For Elias, the shapes emanate from childhood memories and personal freedom granted from within one’s own head.”

Elias bears witness to the leaves falling or downtown Salt Lake infrastructure and derives his own meaning. Since childhood, Elias was interested in the visual components of advertisements. The billboards he would drive past were etched in his psyche, resurfacing in his work years later. Elias and his mom would drive past the University of Utah frequently because he favored the drive so highly. Without titles on his work or a lengthy explanation, viewers infer their own meaning from the iconic imagery.

Elias is known to start and finish a piece of thousand-plus shapes in less than a few hours. During his solo show at the Downtown Artist Collective this past summer, rolls of hung raw canvas displayed his line-drawn style. With pieces stacked around him on pedestals or hung on the walls, Elias drew at a table in the center of the room. He etched decisive triangles while guests filtered in, occasionally breaking his focus to greet each one as they entered. Guests speculated about the repeated date, January 4th, 2022, drawn tangentially to the bold red U’s. Utah’s statehood day fell in line with the theme of Utah’s iconography, and Jentzsch speculates that Elias must’ve seen the date on a flyer somewhere.

The line-drawing style means various things in art theory. For Jentzsch, she imagines Elias’ style comes from regaining a sense of control.  “People tell you your whole life what you’re going to wear, eat, and what time you’re going to do it,” she says. “That support is good, but then he can miss out on making his own decisions.” The definitive and non-erasable Sharpie strokes leave bits of negative space for the viewer to place themselves in. To then imagine what Elias might feel while etching endless lines: a meditative state induced by drawn line.

While Elias doesn’t presently have a show scheduled, keep an eye out for his work in local art shows.