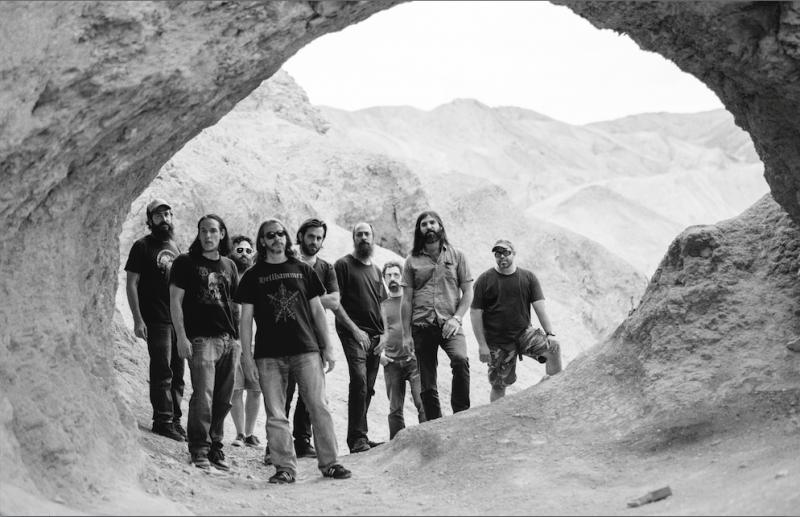 The Budos Band are like the slightly-neglected stepchildren of the Daptone Records roster. Sure, they sport the same soulful pedigree as retro royalty like Charles Bradley and Sharon Jones, but like any good stepchild of the 70s, they also worshipped at the altar of Black Sabbath, and somehow got their hands on some Fela Kuti records. The result is an intense, driving and danceable mixture of groovy funk and soul with a sinister edge. In 2014, they released their darkest and doomiest album yet, Burnt Offering–it’s the aural equivalent of Ozzy wandering onto the set of Soul Train. In anticipation of their performance at The State Room on February 18, SLUG spoke with baritone saxophonist Jared Tankel in the midst of their 2016 Winter Warrior tour, currently wreaking #BudosMayhem across the western U.S.

SLUG:A lot of people made a big deal about the more rock-oriented sound of Burnt Offering when it came out in 2014. What is it about 70s-rock that speaks to you?

Jared Tankel: It’s our common thread. We all have different interests and different passions, but when we’re driving in the van or hanging out and that kind of stuff comes on, it’s sort of a unifying force for us.

SLUG: Do you think there’s a commonality between the groove of ‘70s rock and funk and soul?

SLUG: Was it hard incorporating that influence, especially the added emphasis on the guitar, into the Budos sound?

Tankel: It took us a while to figure it out how to do it well. If we just started writing Black Sabbath songs and playing them as the Budos, it would sound pretty shitty, honestly. We wrote a ton of songs for the last album, and the recording process took a while too, just so we could figure it all out. We were really devoted to making it right and making it how we wanted to make it.

SLUG: I’ve read in other interviews–and I can tell by listening to the album–that it was a conscious decision to move beyond what people thought the Budos Band sounded like on the previous album. Now that Burnt Offering has been out for a while, are there any other outside influences that you would like to see incorporated into the Budos sound?

Tankel: The first three albums really live as a trilogy in the way that they sound–there are definitely stylistic differences, but they exist as a unit in our minds. I think we’ve hit kind of a groove with this new type of writing and arranging we’ve been doing, so we’ll keep with it, but I’m sure we’ll take some turns and explore this new rock-y sound of ours.

SLUG: The Budos Band are an instrumental band–what do you think it is about your sound that draws listeners in, even without the use of lyrics?

Tankel: We appeal to a lot of different types of listeners–we’ve got the funk 45 crew, hip-hop dudes are into it, metalheads are into it. We have a lot of different influences that come into play, so people coming from different backgrounds are able to relate to it. When you have lyrics, you sort of impose something onto the listener, whether in the lyrical content or the melodic structure that you’re using with your lyrics. As an instrumental band, we’re much more adaptable to a diverse crowd of listeners.

SLUG: When I was working at a record store last year we were listening to the newest Jedi Mind Tricks album, and I was surprised to hear them sampling “Aphasia” on one of their songs. What’s it like to have your work sampled?

Tankel: We’ve been sampled a couple times. It happens a lot because we are instrumental, and we have that throwback sound that’s really appealing to guys who are making tracks. Sometimes the result is kind of awful, and we have to turn down some samples and tell people they can’t do it, but sometimes it works and it’s cool. We all love old sample-based hip hop from the 90s–that’s the golden age for us. The guys who are around now and who are doing something similar to that and make cool, decent-sounding hip-hop tracks, we’re down with that–that’s what Wu-Tang did, and Wu-Tang is good in our book.

SLUG: Some members of the Budos Band are also in Charles Bradley’s backing band and have worked with other vocal artists on the Daptone Records roster–have you ever contemplated bringing in a vocalist as part of the Budos Band?

Tankel: I think it was a slight possibility maybe 10 years ago when we were just starting off, but at this point our sound is what it is. Adding a vocalist on top of it just wouldn’t work with our aesthetic and what we’re trying to do. There’s already eight or nine of us depending on the day, so adding a 10th guy who is your frontman all of a sudden in a band who doesn’t have a frontman would throw off the whole vibe. Musically our songs are pretty dense as it is, so adding a vocalist on top of that–I’m not quite sure how they would fit into it creatively.

SLUG: The Budos Band will be in Salt Lake Thursday at the State Room–how would you describe a Budos show for the uninitiated?

Tankel: It’s gonna be loud and a lot of fun and you’ll probably drink more beer than you’ve had in a long time. There’s no filler–we come and we hit hard and we go for an hour and a half and get sweaty and get a little crazy and try to make it a party.