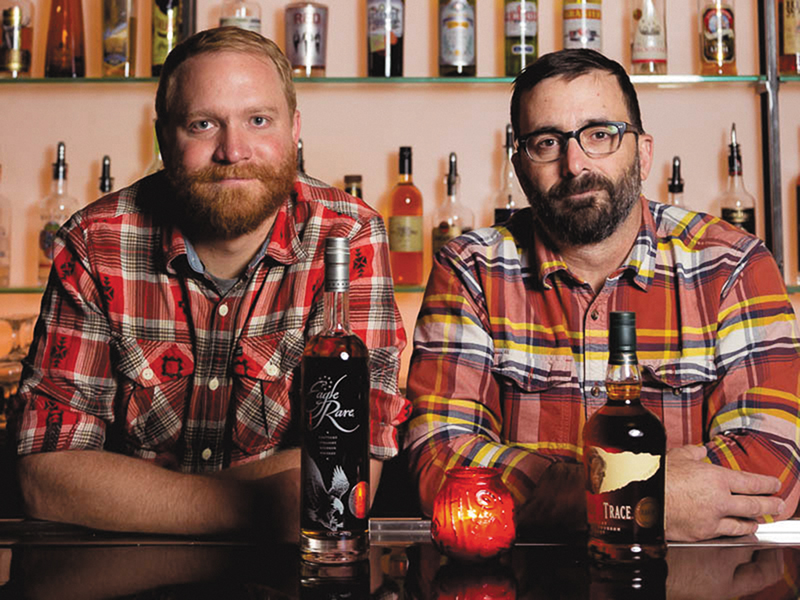 Buffalo Trace Bourbon: A Step Up with Bar-X

There’s nothing quite like having a bourbon to sip on in a dimly lit cocktail bar. Luckily for the connoisseur of the finer things in life, Bar-X has just that—Buffalo Trace. Bar-X has had a long and profitable relationship with the Kentucky-based, Sazerac-owned Buffalo Trace Distillery. After reopening Bar-X in 2010, owners Richard Noel and Duncan Burrell wanted to offer customers quality bourbon for an affordable price. The obvious solution was to sell Buffalo Trace, a quality bourbon from an up-and-coming brand. Over time, it proved to be a popular product, and according to Burrell, Bar-X was moving “more [of it] than anyone in the state by a long shot,” he says.  Because of this, Bar-X would come to provide their own, proprietary barrels of Bar-X-branded Buffalo Trace and, later, Eagle Rare.

After a couple of years, Bar-X’s high sales attracted the attention of the Buffalo Trace Distillery. “Bourbon started really picking up in sales [at Bar-X], and Buffalo Trace became like a household name around that same time,” says Noel. We were moving a lot of their product, and [Buffalo Trace] were like, ‘Would you guys like to do a barrel, a private barrel with us?’” Of course, Noel and Burrell took the distillery up on their offer and are now on their fourth barrel of bourbon.

It’s important to note that when Noel and Burrell pick up a new barrel, they don’t get a blend. Rather, they choose a single barrel. “People really seek out single barrels because it’s going to taste different than just a blend,” says Noel. When a bunch of barrels are together, the result is a flavor profile that is going to be pretty much the same nationwide. On the other hand, if one gets a single barrel, the flavor is going to change with the season as it is produced. This makes the experience of tasting a Bar-X-branded bourbon a unique one. The Bar-X-branded Buffalo Trace is a bit hotter and spicier than the regular Buffalo Trace–branded bourbon—arguably, with this extra flavor, it’s perfect for cocktails like a Manhattan or even just on its own.

Purchasing a single barrel of Buffalo Trace is quite enjoyable for Noel and Burrell. Every year, the duo visits the Buffalo Trace Distillery in Frankfort, Kentucky. “It looks like they’re only making Buffalo Trace there, but they’re making a lot of really great whiskey, and they’re doing it the old-school way in this huge distillery—it’s incredible,” says Noel. “Ancient Age would be their entry-level whiskey; Buffalo Trace is their more well-styled whiskey; and they go into Eagle Rare. On the higher end, you’re talking about the antique collection, which is like your Thomas H. Handys and your George T. Staggs, and then they have the Pappy Van Winkle Line as well.” Bar-X supports all of these brands and, in turn, has been able to acquire some of the harder-to-get whiskeys in the country.

When seeking out a single barrel of Buffalo Trace, Noel and Burrell are given a selection to choose from. “The last one we did, Eagle Rare,” says Burrell, “[the barrels] were all next to each other, like in the exact same spot of the rackhouse. If you pull one from the top, it’s going to taste entirely different from one that’s on the bottom or one that is in the heart of all the barrels. They lay those out. We would go in with essentially the person who runs that barrel program.” The process of selecting a barrel takes some time, as Noel and Burrell sample the contents of each barrel while taking meticulous notes. “Every time we’ve done it, we’ve pretty much agreed down to the last two barrels. It’s a fun process,” says Burrell.

In addition to all of this, Bar-X has an interesting arrangement with local breweries in Salt Lake. After a barrel is used, a brewery like Epic can use them to help age their beer. “We did it with Epic, and they put—with the last Buffalo Trace barrel we got—Big Bad Baptist in it,” says Noel. “So we had a line of Beer Bar Big Bad Baptist using Bar-X’s barrel that we got straight from the distillery.” With the Eagle Rare barrel, there will be a release in collaboration with Squatters in November 2016.

Bar-goers be warned: This bourbon has a nice kick to it and will leave you feeling warm and fuzzy. Whiskey nuts and casual cocktail sippers alike will find that Bar-X is offering an experience that won’t be found anywhere else. “It’s really rare to find a single-barrel product at all,” says Burrell. “It’s also really cool, obviously, to have what feels like our own bourbon.” Bar-X charges $7 for a neat Eagle Rare and $5 for a neat Buffalo Trace—both are 1.5-oz. pours. You won’t find these spirits listed on Bar-X’s menu, but you can always inquire about these unique bourbons with one of their immensely capable and talented bartenders. Be sure to ask one of them, and they will take care of you.