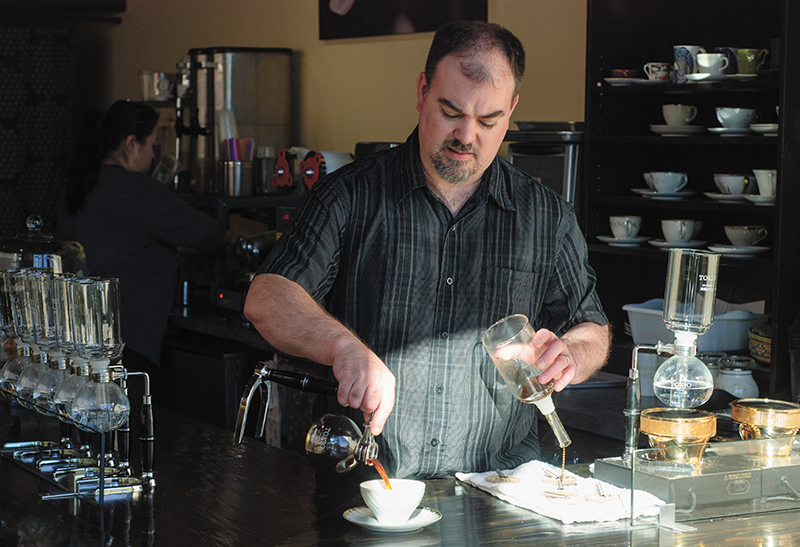 “Top to bottom, the quality of everything we do [makes us unique],” says John Piquet, owner and operator of Caffe D‘Bolla in downtown Salt Lake. Along with wife Yiching Piquet, Caffe D’Bolla offers a unique coffee-tasting experience that is not found anywhere else in the city: siphon-brewed coffee—also roasted onsite—which highlights the nuances and complexities of each roast. For each siphon-brewed specialty on the ever-changing, seasonal menu, there is a suggested time of about 30 minutes to really delve into the flavors awaiting in each cup. The siphon method, on its own, takes about five minutes with a cool-down time of eight to 10 minutes, depending on the coffee. This allows time for the different oils in the coffee to settle in different ways, offering one set of flavors when you first start sipping and transitioning through different, sometimes subtle flavor notes as the temperature cools down.

This entire process can be somewhat daunting for the more casual coffee drinkers, but it is a rewarding experience for coffee enthusiasts who approach coffee-tasting much like a wine- or whiskey-tasting. Coffee is known to have far more complexities than even wine, which is something that Piquet seeks to draw out through the siphon. “[The siphon] brews a better cup than any other method, provided that you do it right,” he says. “Based on the science, it yields more flavors than any other brewing method. In the end, you end up with a very clean, dynamic, nuanced cup.” The siphon fully immerses the coffee with the water and keeps a constant temperature throughout. Most other brewing methods have a declining temperature profile, which does not completely unlock all of the aromatics and flavors that a coffee could have to offer. At the end of this brewing cycle, the water is then run through the grounds a second time, giving a critical “secondary extraction.” Though the siphon method is the most effective way to bring out all the different flavors in a coffee, Piquet says, “Everything really starts and ends with the quality of the coffee and the quality of the roasting. Without those things, it’s just a fancy-looking pot.”

For Caffe D‘Bolla, each week brings in a different coffee, all of which are expertly roasted in-house.  The coffees that Caffe D‘Bolla roasts are often in small, exclusive batches that are premiered and then never repeated in exactly the same way again, making for a new experience every time. For the siphon coffees, Piquet only uses single-origin in order to highlight the flavor profile of each cup. However, the espressos are often hybrids that Piquet concocts himself. “We change our espressos every week to week and a half,” he says, “so, throughout the year, I will do 35–40 espressos. We never repeat.” This process takes shape through roasting each coffee individually and then selecting which coffees to blend to create the espresso for the week. Piquet seeks to create a balanced effect that will come through on Caffe D‘Bolla’s espresso drinks, which are more popular as they don’t require the same amount of time as siphon-brewed coffee. For Piquet, every new coffee creates a refreshingly new experience. “I really don’t look back on the coffees that I do,” he says. “Each coffee helps me learn something so that the next month is a more interesting month.”

Caffe D’Bolla deviates from the average coffee-shop experience, but it’s an approachable and flavorful change for coffee drinkers seeking more from their cup. Caffe D‘Bolla’s mission is to become more focused and to serve a clientele that is more inclined toward the complex tastes of coffee. “We get a lot of really awesome customers,” he says. “The challenge is some people who want to experience the siphon really didn’t understand how long it was going to take, and you can’t shorten the process. It’s not the brewing; it’s the whole experience surrounding it.”

For Piquet, everything from the selection to the roasting to the brewing process requires both the science of what makes a good cup and the artistry to create something unique. “If you treat the coffee like a science experiment and take the artistry out of it, it’s going to end up tasting like a science experiment,” he says. They consider every variable when featuring a cup, down to the shape and size of the cup itself. During the brewing process, Piquet explains each step of the siphon-brewing process as well as background information about the siphon and the coffee he’s featuring. However, he says that the coffee’s flavors often have their own story to tell. “People become educated by the cup, so you don’t have to say a lot,” he says. “They can’t ignore what they taste.” Though the Caffe D’Bolla experience does require time to fully enjoy, the results often speak for themselves by way of a fully realized cup of coffee with rich flavors not present in coffee made any other way. It’s a worthwhile experience that is both educating and fascinating, and one that is truly unique to Salt Lake City.