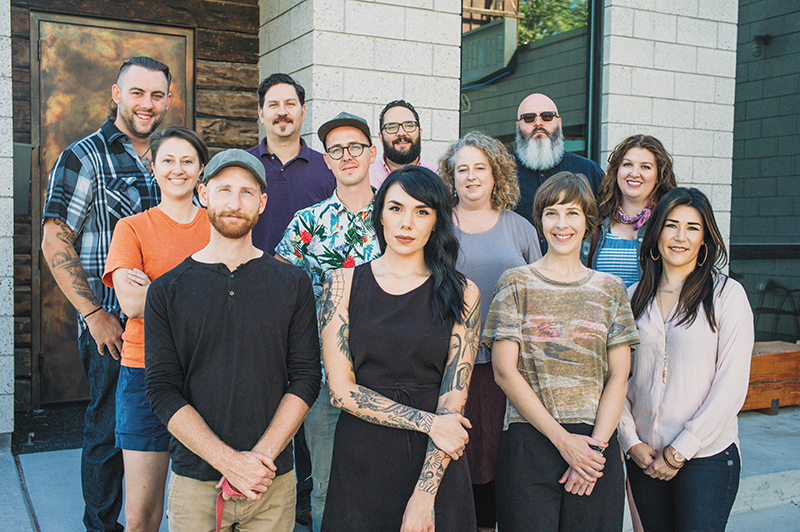 Like many great adventure stories, the tale of Central 9th Market had humble beginnings. Almost everyone involved with the project met socially, either in passing while grabbing lunch at Jade Market or stopping for coffee at Blue Copper. The philosophical groundwork that got the Central 9th development off the ground was built upon a series of chance meetings, close calls and a little bit of luck—an alchemy that also happens to be a trademark of great adventures. I’m not typically one to get romantic about urban business developments, but after getting to know the people behind Central 9th’s newest addition, it’s hard to view the culmination of this project in any other way.

While there were many factors involved with the foundation of Central 9th Market, it’s perhaps best to begin with Jason Foster and Jesse Hulse, two native Utahns who met while getting their architecture degrees at the University of Utah. After spending some time working at different architecture firms around the state, the pair decided to work together. Nine years ago, they formed Atlas Architects, their own firm that has allowed them to pursue creative projects all over the Wasatch Front. Seeing Central 9th as a metropolitan area with tons of potential, Foster and Hulse, along with their development partners Peter Corroon and Chris Corroon, chose it as their base of operations. “We wanted to be in this neighborhood even before we started Atlas,” Hulse says. “We just kept our eye on it.”

As local businessmen themselves, Hulse and Foster made organic growth a priority when designing the location. “We wanted to have businesses that were complementary to each other,” Hulse says. “It was really important to find this organic mix of small, local businesses that did something creative.” Building a development like this tends to generate some red tape, and Local First Utah stepped in to help get the project going. “This sounds cheesy, but Local First has created the path for Jason and Jesse’s vision to be developed,” says Kristen Lavelett, Executive Director of Local First Utah. “It wasn’t easy, but because the idea had a purpose behind it, we stuck with it.”

Both Local First and Atlas Architects wanted to prioritize their vision of a development that fit nicely within the existing neighborhood. They enlisted the feedback and help of local residents to create a retail space that was comfortably scaled to its surrounding residential areas, not to mention the fact that it would be home to some exciting local businesses.

When Mary Gordon opened Jade Market’s first location on 200 South 11 years ago, she was an attorney looking for a career change. “I had some money saved up in my retirement account and realized that people of my generation are never going to get to retire,” she says. “I didn’t want to be a 70-year-old lawyer—I had always wanted to run a business.” Gordon has a soft spot for smaller, industrial Downtown neighborhoods—“They remind me of places I lived in back East,” she says—which was a big factor in her decision to open Jade Market in the Rio Grande neighborhood.

Despite the fact that many developers have approached Gordon with plans on opening a second location for Jade Market, it was the ideological connection that she had forged with Foster that got her involved with Central 9th Market. “He used to work with GSBS Architects, our neighbors on 200 South, and he would come in to Jade Market to shop,” Gordon says. “We’ve been talking to each other for five years now. Jason and Jesse always had this philosophy about putting together a business development in a really organic way.”

With a development like Central 9th Market, a local grocery store has the unofficial responsibility of being a community hub—and nothing brings people together like shopping for locally sourced groceries. “The most important thing is to get to know our customers and what they need,” Gordon says. As Jade Market ramps up to its tentative opening date of Oct. 3, they are already making plans to spotlight local vendors with pop-up markets in order to introduce themselves to their new neighbors. “We’re just really happy to be here,” Gordon says.

Any fan of locally produced hummus, muhammara and toum has crossed paths with Laziz at one point or another. Back in 2012, when Laziz founders Moudi Sbeity and Derek Kitchen first began selling their wares at local farmers markets, they had always cultivated a dream to open a Middle Eastern café. “We put ourselves out there, knowing that it would come together in time—that was about two years ago,” Kitchen says. “There were moments when we didn’t think that this project would come together at all, but it shows that local business is doing great in Salt Lake right now, and it shows that people want to invest in local business.”

When Laziz Kitchen opens its doors in late October, it will blend elements of a coffee shop and daytime café. “The whole concept is to introduce aspects of Middle Eastern food that are not found in Salt Lake yet—my mom is flying out to train the cooks,” Sbeity says. In addition to pastries, salads, sandwiches and a rotating menu of Middle Eastern stews, fans of Laziz’s signature spreads will finally have a spot where they can satiate their cravings on a more consistent basis.

Another daytime destination that will open its doors this fall is Troubadour Salon, owned and operated by Memorie Morrison. Morrison’s 16-year experience as a Landis stylist inspired her to move out on her own. “My goal with Troubadour is to create a place where a hair stylist can grow as a business person,” she says. “The three girls that I have are already total bosses at business, but I want to put them in a place that sets them up to run their own show.”

As a Davines salon, patrons of Troubadour can expect sustainable products and a satisfying, spa-like experience. “It’s a hybrid between one of the big salons and one of the boutique salons—something small and cozy with a Landis kind of vibe,” Morrison says. “That’s where we’re all from, and that’s what we want. I love Landis for that because they taught us a lot.”

Morrison’s involvement with Central 9th Market was a bit more serendipitous than some of the other business owners. “One of my clients who works with Jason and Jesse came in to get her hair done and put me in touch with them,” she says. “They specifically wanted a salon because all of these businesses feed each other, and people want to go to places where there’s cool stuff happening.”

When the sun goes down, Central 9th will continue to be an SLC destination. Jen Gilroy has uprooted her popular small-plates restaurant Meditrina in order to relocate to Central 9th. “It’s bittersweet,” she says. “A lot of blood, sweat and tears went into the making of Meditrina.” Though it’s a difficult transition, Gilroy is looking forward to the new opportunities that Central 9th will create.

Original fans of Meditrina will be pleased to see that the restaurant will still offer its signature small plates, but a new location calls for some new menu items. “We’re stepping up our game and pushing the envelope with the food that we’re going to bring,” Gilroy says.

For those looking for more of a local watering hole, Scott Gardner, Sean Neves and Matt Pfohl have you covered with Water Witch, their new, aptly named bar. For those unschooled in local folklore, early Utah settlers were known to use dowsing rods for the purpose of “water witching,” or tapping into a supernatural influence to find wells of fresh water. “Sean is a local boy, and he loves the history of Utah,” Gardner says. “Because of that, one of the things that we’ve always wanted to do is mine the culture and history of Salt Lake rather than poke fun at it.”

In keeping with the neighborhood feel, Water Witch has made customer service a priority. “The most important element of a bar is to create community,” Gardner says. “If guests want something unique, we’ll provide that for them, but it’s not going to be the kind of place where the bartender will look down on you for drinking what you want to drink.”

According to Lara Fritts, Director of Salt Lake City’s Department of Economic Development, “This project will transform the neighborhood and help make Central Ninth a unique destination with thriving local business.” Everyone involved with the development views the area as a blank slate—a place where each of them can not only write new chapters to their own adventures, but also contribute to the overall story of the neighborhood. “I believe it will flourish because there is nothing else like it, not just in Utah, but, to the best of my knowledge, nothing like it in the country,” says Lavelett. “It’s entirely locally owned and developed—it’s the definition of what Local First is in support of.”