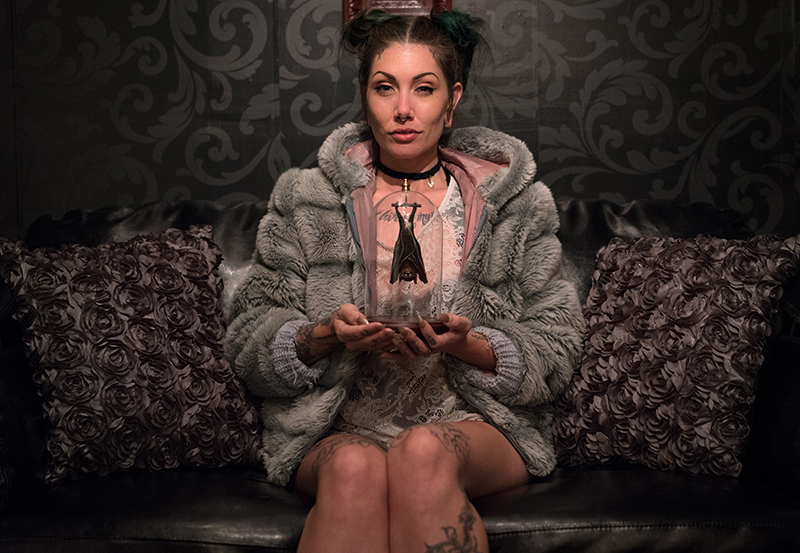 City Salt: The Art of Bones

There is something both mystical and alluring about the craftsmanship of bone art. Even though bones and skulls have always had investments in home décor and jewelry, there are many who refuse to wear or display bones due to moral conflicts or an aversion to the entire concept. Local artist Kelly Lublin’s CitySalt is here to break that stigma and prove that everything, even after life, is beautiful and has a purpose. Combining the art of bone preservation with the craft of framework, CitySalt’s ornate and one-of-a-kind pieces bring a new level to cruelty-free taxidermy art.

Lublin has always been more of a “creepy kid,” but she didn’t discover her love of taxidermy until she watched the TV show Oddities. “When I saw Oddities, I thought, ‘This is what I need to be doing,’” she says. “I bought my very first bat at one of the [Oddities’] stores in San Francisco. At that point, I got over the hump of being grossed out by dead things. I’m an animal activist and thought, ‘I can’t have this.’ But then I realized—I can.” About a year ago, Lublin started her project with a headlamp in her backyard, digging for owl pellets. Thinking small pellets would be easy, the much longer process it took to find and clean the bones surprised her. “You have to pick each pellet apart alone and separate the bones,” she says. “You don’t know which bone goes with what animal because there are so many different animal pieces. I would have different containers [filled with bones] and give each container five rounds of part water, part hydrogen peroxide, then a final rinse and then dry.”

Most of CitySalt’s work nowadays consists of larger skulls—foxes, deer, horses, you name it. Friends will bring found bones to CitySalt for future projects, and as a supporter of other local artists, Lublin orders many of her skulls from taxidermist and SLUG contributing writer Andrea Silva, who runs Remnant Preservations. “Sometimes, [my partner] Tori Loke and I find bigger skulls, and we’ll send them to Andrea for cleaning,” says Lublin. “I also know that all of her bones are legit.” Lublin might be new to the game, but she is aware of the safety measures of bone collecting, preserving and selling, and is making an effort to learn more as she continues to create new pieces—as well as play with different preservation mediums. “Right now, I’m interested in crystallizing skulls,” Lublin says, “and I also have teeth—human teeth—that I was given by a dentist!”

CitySalt’s main goal—next to creating gorgeous bone art—is to bring more appreciation to the creatures that have lived and died before us. “There’s beauty in everything, from blooming flowers to critters that are alive—and when you see the bones, how can someone just throw that away?” says Lublin. “To me, I see something that once has lived and I want to pursue that beauty, keep it going for someone to look back on and appreciate. Each creature is so intricately put together, but too often, we don’t want to see the ‘underneath.’ Even that is beautiful, and I think everything needs to be appreciated.” For those who are morally opposed to animal bone décor, CitySalt’s animal bones are cruelty free. “I won’t take anything that has been killed,” she says.

Despite the quality of her craft, Lublin was nervous to display CitySalt pieces at this years’ Craft Lake City DIY Fest—but it turned out that the responses were far better than expected. “I’m still speechless about the love, the support and the positive feedback from Craft Lake City,” she says. “People are usually freaked out by dead things, but portrayed in such a way, in a beautiful frame—it’s easier, showing people that it’s okay to appreciate it.” Lublin expects to be back at DIY Fest next year and also has plans to visit festivals in other states, such as Portland, Oregon.

CitySalt has a running Etsy shop (etsy.com/shop/CitySalt), but Lublin is prepared to take custom orders. “I usually ask what kind of skull you want, the color you like and if you want it modern or ornate,” she says. “Then I go from there. I want to start taking a bunch of requests so it can challenge me to actually go out and find what people want, rather than just me putting together what I like.” She laughs about enjoying her art too much at times. “I call myself a collector, and what I collect fits together. My favorite piece was my ram skull with an antique frame that had flowers around it—if I hadn’t sold it, I’d have it in my room,” she says. “But I would rather have someone experience it in their own home than hoard my own art.”

One of my favorite aspects about CitySalt is its name—Lublin supports not only local artists, but also Salt Lake City in general. “The name originally started as a hashtag I used,” she says. “I was born and raised here. I love Salt Lake City. People usually want to get out—I don’t. I love SLC and the underground scene and everything we have to offer. I wanted to incorporate that.” Check out CitySalt on Etsy and Instagram (@CitySalt801) to keep up with Lublin’s wicked yet elegant artworks.