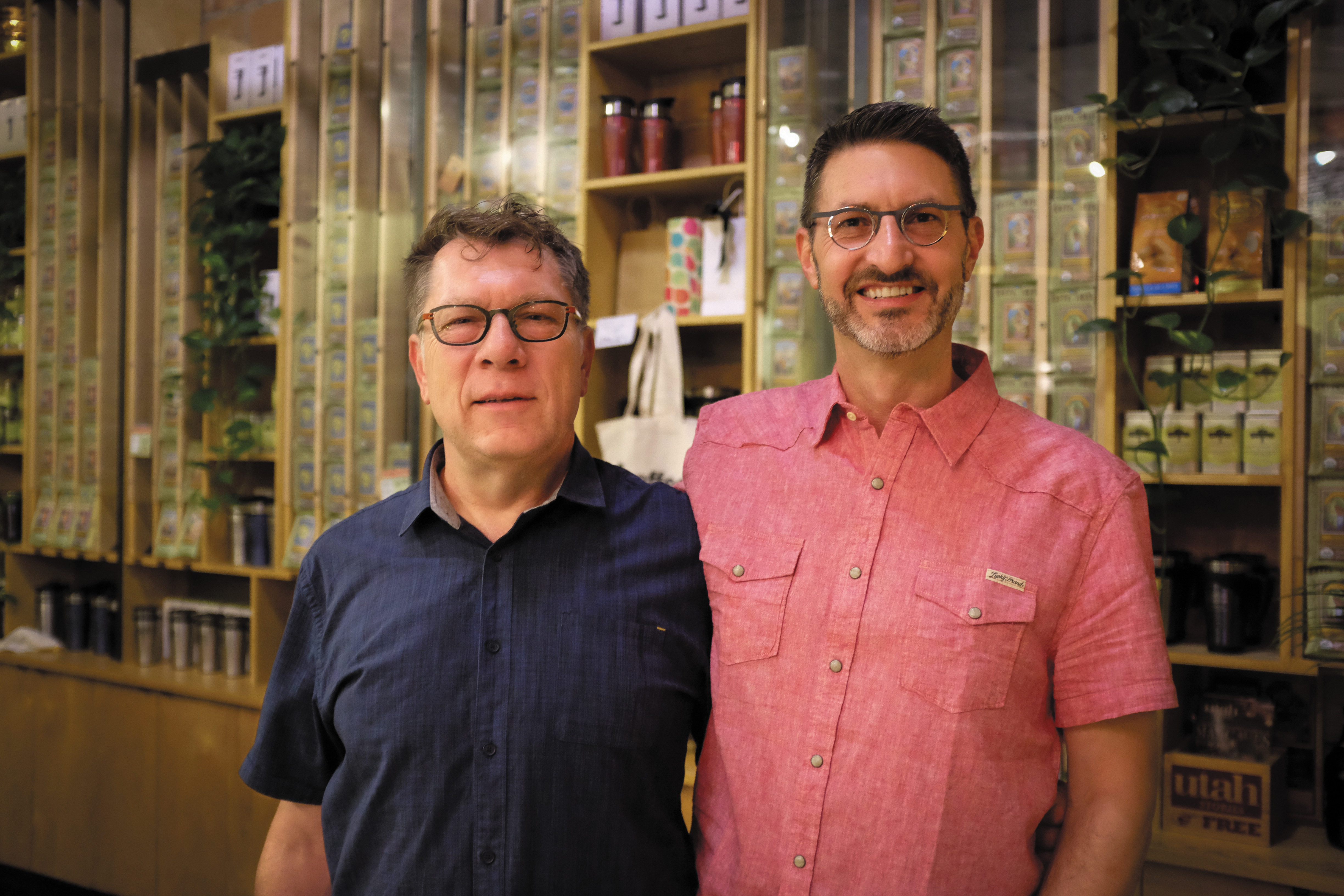 Coffee Garden has long been the staple of 9th and 9th along Harvey Milk Boulevard. The coffee shop opened in May of 1993 amid a rise in popularity for specialty coffeehouses. In 1992, Alan Hebertson had lost his job at a hotel. Facing the prospects of working at RC Willey, he and his husband, Dieter Sellmair, decided to go into business for themselves. “It was just before the coffee thing really took off, but I had a pretty good idea about it because I had a friend who lived in Seattle,” says Hebertson. “We were driving up there, and we saw how the new coffeehouse thing was beginning to come to life in Seattle.

In the early 1990s, coffeehouses began popping up at an astonishing rate. This was largely influenced by the rise of Starbucks and Seattle’s Best Coffee. Hebertson says, “For a number of years, Starbucks and Seattle’s Best Coffee were kind of the big players in what was a new coffee culture … Specialty coffee roasters were starting to open cafés, and people were starting to become aware of something other than Folgers Coffee at home.” The original idea was to open up a Starbucks location in Salt Lake City. At the time, though, Starbucks corporate laughed at the notion but would allow their coffee to be sold at Coffee Garden.

Instead, though, Coffee Garden aligned themselves with Seattle’s Best. Ironically, in 1996, Starbucks would later make moves into Salt Lake City and even floated an offer to buy out Coffee Garden. A realtor had proposed $100,000 to Heberston and Sellmair—with an additional $50,000 on account of a troublesome landlord—to walk away from their lease. The owners of Coffee Garden declined and were soon challenged by the opening of a Starbucks on the southeast side of 9th and  9th. Funnily enough, the competition actually kicked Coffee Garden into high gear. In 2006, Coffee Garden would move to the southwest side of the street, and several years later, Starbucks would close its doors. Hebertson says, “People say that we closed down Starbucks. The truth is, they were closing stores that couldn’t have a drive-through.”

After the 2003 Starbucks corporate acquisition of Seattle’s Best Coffee, Coffee Garden switched to serving the Logan, Utah–based Caffe Ibis. Caffe Ibis had worked with Coffee Garden from the beginning by selling them their first espresso machine, and they even taught Coffee Garden the basics of operation. “They are truly our best friends,” says Hebertson. “If they were any closer, we would have all of our employee parties together. When I get samples of coffee sent to me from other places, it’s like, ‘Thank you for your sample; I’ve got an amazing coffee supplier right here who knows what they are doing.’”

A part of the strength in the relationship between Caffe Ibis and Coffee Garden stems from Ibis’ integrity as a business partner. Caffe Ibis has a reputation of going to great lengths to ensure that their coffee is sustainably grown. Ibis’ coffees are triple-certified as organic, which means that their coffee is organically grown, fair trade and even migratory-bird-friendly. Hebertson says, “We all have to start worrying about the environmental issues that are going to wipe out coffee plantations … but I know Caffe Ibis is so concerned about the sustainability and the environmental issues that are involved.”

No doubt, the vigor that keeps Coffee Garden up and running comes from their baristas. Coffee Garden’s baristas operate within specific guidelines when making coffee. This adherence is strengthened by periodic training sessions and evaluations. Each barista boasts an impressive ability that defines their contributions to the coffee shop. “[Our] employees are vital,” says Hebertson. “I don’t know all the customers we have here—thank god my employees do. There are a thousand people a day here. There’s no way I could know them all.” He continues, “We have people who come in specifically to have so-and-so make them a coffee. The employees are really who the place boils down to.”

Although the location changed in 2006, Coffee Garden has maintained a loyal customer base. It’s eclectic. In the morning, one can find parents enjoying coffee after they have dropped their kids off at school, and during the day and evening, students from the surrounding colleges can be found studying hard. “I think that our café developed, in a way, because of the community,” says Hebertson. “It’s truly a cross-section of Salt Lake culture. You’ll find tweakers in our bathroom shooting up occasionally. You’ll also find the crème of Salt Lake society to come in to get coffee. It’s always been that way.” Hebertson points out the unique quality of the 9th and 9th  neighborhood. Unlike other parts of Salt Lake, the neighborhood is walkable, tight-knit and feels like one is out of town, where religious influence is not keenly felt.

Additionally, Coffee Garden has a space on 254 S. Main St. inside Eborn Books. The future looks bright for Coffee Garden, with plans for upcoming renovations. The idea is to brighten up the café and give it an energy-efficient storefront. Coffee Garden is open 6 a.m. to 11 p.m., seven days a week. Be sure to stop in for a coffee or one of their fantastic mochas, or choose from a wide selection of teas—the sky’s the limit.