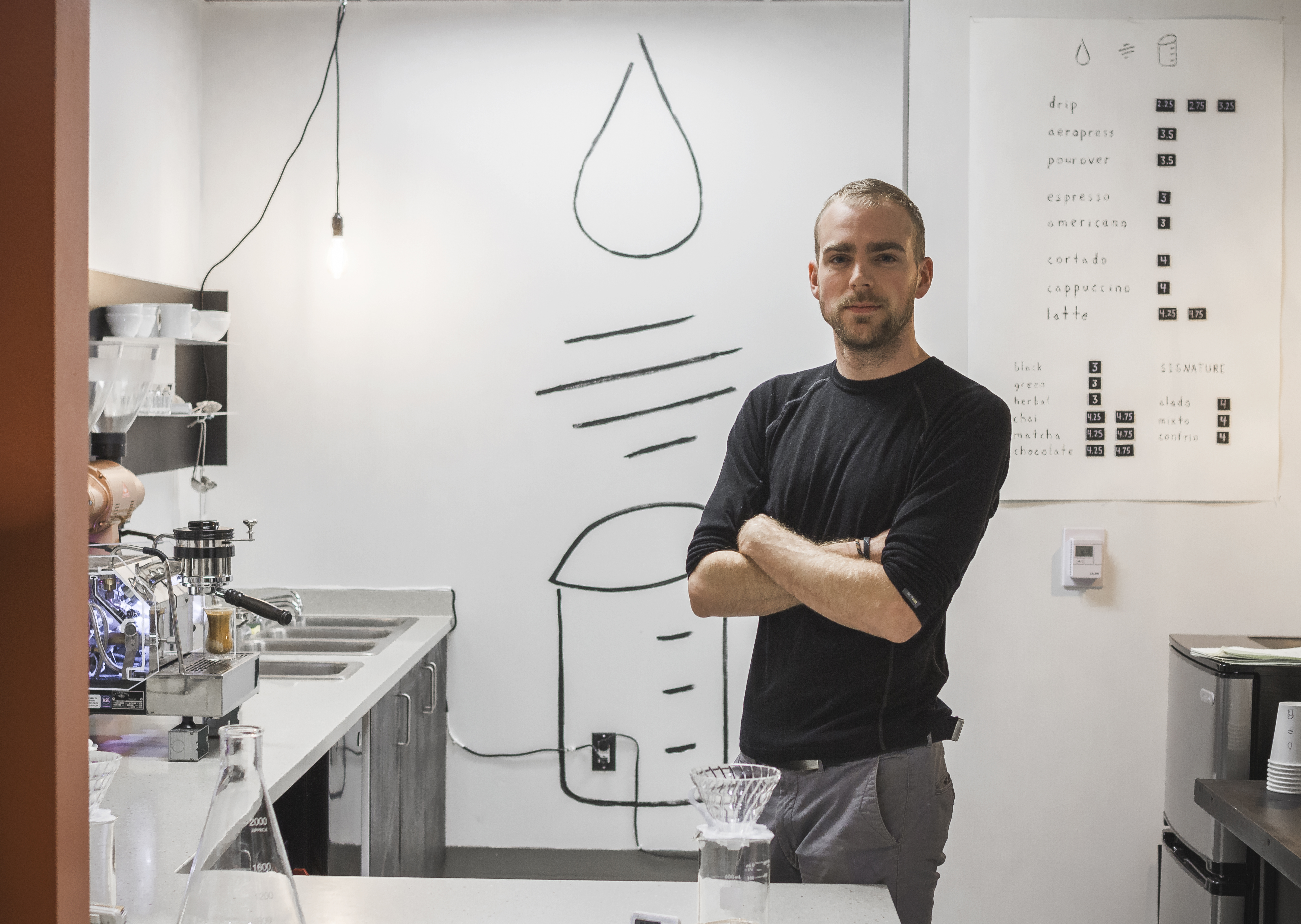 Coffee Lab: One Man’s Passion is Another’s Cup of Joe

Salt Lake City is filled with unique coffee shops and cafés. Each has its own individual style, coffee variety and, usually, a subculture that follows. Around every corner, there’s a shop to fit your personal aesthetic as well as your tastebuds, and everyone has their favorite. When you’re looking for a cup of coffee that’s completely different from the rest, however, head to the University of Utah School of Pharmacy building. There, hidden away, is a one-man show serving up precise brews that give customers not only a caffeine boost, but also an advanced coffee experience. Coffee Lab is exactly what it sounds like: an experimental workspace for owner and barista Simon Zivny to create drinks that showcase the coffee’s flavor.

Formerly a La Barba location, Coffee Lab is a brand-new project that fell completely into Zivny’s lap. “I used to actually work for La Barba,” he says. “I ran the location for them, and then when they left, I had the opportunity to set up shop here.” His tiny storefront is rented out from the University of Utah. “They want something to be here, so it ends up working out really well for the both of us,” he says. While there is decreased traffic during school breaks throughout the semester, Coffee Lab’s clientele remains mostly the same because the majority of the customers aren’t students but faculty. Low traffic and low overhead create an amazing workspace for Zivny to create his simple yet meticulous drinks, which will hopefully make Coffee Lab a destination for coffee lovers all over the world to come visit.

Ever since Coffee Lab was merely a concept, Zivny had always wanted to take on the next step in his coffee career. “I wanted to have a way to not sacrifice flavor, ever,” he says, “which is almost unrealistic, since most cafés do without even realizing it.” Zivny executes this desire with minimalistic practices, such as only using the most delicious milk selections, completely rejecting the use of sugar and taking ample time to prepare each drink. “A lot of the things I do aren’t time-efficient,” he says, “but that isn’t what’s important or what I want to do. I want to completely focus on just the coffee.”

Not only is his technique minimalistic, but so is his storefront. While the black-and-white paint job is pleasing to the eye, there’s nothing to really pick apart about the atmosphere, which is exactly what Zivny wanted. “Aesthetics shouldn’t get into the way of someone’s coffee-drinking experience,” he says. “The main focus should be the coffee.” By maintaining a crisp, clean work space, the coffee is allowed to be the focal point without sacrificing style.

Zivny’s simple drinks really are what shine. By keeping the menu basic and using local roasters as well as out-of-state roasters, there isn’t a lot of room for muddying up the drink or complicating the experience. Each drink has its own design, with meticulous ways of construction that allow each concoction’s unique personality to come out. “Coffee is simple,” he says. “You think about a cappuccino and a latte—on paper, they sound quite similar, but in reality, they’re a totally different experience.” For example, one drink, called the Alado (a play on the Spanish phrase “on the side”), is simply an espresso shot with a chaser of steamed milk. “The idea there is that you will taste the espresso in its entirety, but with the milk chaser, you’ll also be able to know how it would taste as a milk drink,” Zivny says. The Confrio is Zivny’s most unique offering. Served in special cups, the idea for this sip is to give off the same effect as an iced coffee without having to add ice or do any mixing. Zivny starts by using cool milk as the base, pulling the espresso shot on top, and letting the coffee mingle its way throughout the milk. The product is a beautiful drink that creates a different experience each time you take a sip. “There are alternating tastes of sweet and rich while experiencing pockets of warm and cold,” Zivny says. In addition to all of his special espresso creations, Zivny brews his drip coffee throughout the day in a seperatory funnel, a completely new, filter-less approach to brewing. Zivny’s shop doesn’t serve any seasonal treats for the holidays, but that shouldn’t stop anyone from dropping by. “I don’t believe in making something for the sake of the season,” Zivny says. “If a fall drink isn’t good enough to be served during the summer, I wouldn’t serve it in the fall, either.”

Customers not only love the coffee but also Coffee Lab’s charm and personality. Zivny has crafted his own creative oasis where coffee is the main focus and the emphasis is on the experience. His patrons receive high-quality coffee, served only with organic milk and a precision that makes every cup something special. Coffee Lab now carries Honeycomb Bakery pastries, purely because Zivny loves them and because they complement the drinks incredibly well. Coffee Lab is open from 7:30 a.m. to 4 p.m. daily, and there aren’t any plans to close during the University’s holiday break, so a delicious coffee fix will be readily available during this holiday season. To see all of the drinks Zivny is whipping up, visit facebook.com/coffeelabslc.