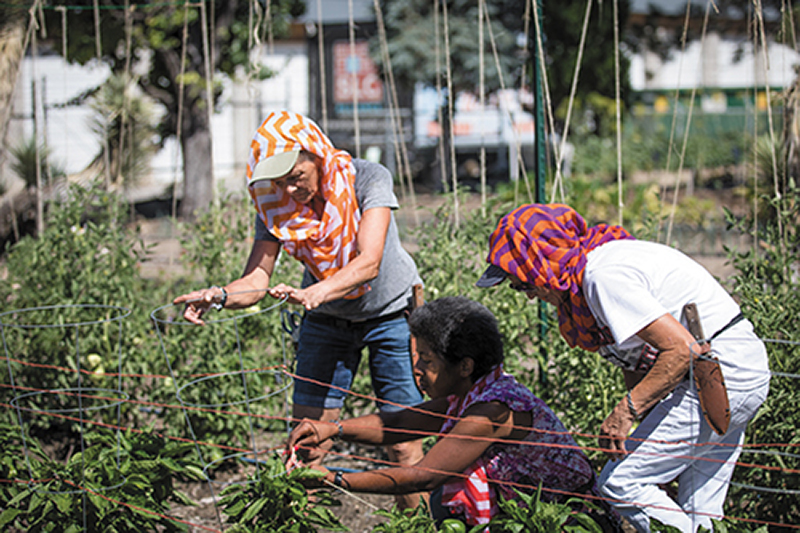 “Nothing is wasted in nature,” says GREEN TEAM Garden Manager James Loomis with conviction as he snaps twigs between his soil-imbedded fingers. The Wasatch Community Gardens GREEN TEAM Farm is a gorgeously wild plot west of The Gateway, made from the reconstructed beauty of discarded things and the re-empowered beauty of women building themselves by working the soil. Having just completed their pilot year, the program is in bloom with vibrantly growing plants and people. The mission of the GREEN TEAM was threefold: to support permanent housing and work for homeless women, to provide produce to Head Start—a program to give quality food to local schools—and to cultivate a shared community space that would thrive in an oft ignored area of the city.

The farm is adorned with repurposed and brightly painted shipping containers and a trailered, solar-powered UFO-like art structure lovingly named Saucey, which served tenure amid the Utah burner circuit, among others. After meandering the grounds and meeting the women working to build their lives and the farm, I perched on a bench crafted from roughly cut logs and spoke with program founder Camille Winnie and Loomis. “We thought of a community garden that homeless people could access,” says Winnie. “I took my idea, found the willing partners, got them onboard. The history of this piece of land is that it was a garden. [The family who] owned it used to leave produce out for people to take!” She notes that the perimeter fence, sprinkler system, fruit trees and a small corner green house were already in place, ready to be brought back to life. Winnie chuckles appropriately over the one-dollar-per-year lease agreement they’ve secured on the land, a testament to the people and systems supporting the program.

The four (or more) women of the GREEN TEAM work an average of 20 hours per week for the 10-month program duration, including four days on the farm planting, building infrastructure, harvesting and distributing. Fridays are classroom days wherein they receive critical job and life skills training. The desired outcome for participants is “to leave here with the skills they need to be housed and stay housed, [and to] have long-term employment skills to maintain, grow and progress,” Winnie says. She describes the struggles that women experiencing homelessness face and the unique challenges of the GREEN TEAM participants: “We’ve had some who’ve had drug problems,” she says. “Some have had multiple episodes of homelessness. Some recently became homeless, and their lives have always been on that edge. Others have escaped domestic violence. Living in crisis while trying to solve your problems is a lot to ask.”

Such numerous intersections of struggle and barriers weave a tangled web for Utah’s homeless population, one who is deeply misunderstood. “The old adage ‘Just get a job’ is so ridiculously oversimplified,” she says. “Staying at the shelter while you’re working is challenging. One thing we’ve been able to do is get reserved beds while they’re in the program so they don’t have to give up their bed every 30 days like the general population. All four of our women from the first year are now housed.” I’m struck by the stark reality that a woman working to better her circumstances is beset by having to abandon her most basic needs in order to comply with a heaving, struggling infrastructure. “Being with this crew is the crash advanced course in how to rebuild lives,” James says. “All of these women are actively building this program for the next women who come into it. I learned quickly that it’s about giving these women a safe, beautiful place to get their mojo back.” In all, the farm serves to empower these women.

Loomis points out the thoughtfully crafted meditation, yoga and deep breathing space nestled beneath sturdy fruit trees with glimmering found objects hanging from their branches. “Imagine the psychic stress of sleeping [in the shelter] each night, trying to hold onto your possessions while you sleep,” he says. He reports excitedly that one of the participants took to the regular group yogic practices so much, she earned her yoga teaching certificate with the help of local scholarships and lessons learned on the land. I find myself smiling widely as he describes the stories of the women pulling up produce and pulling out of hopelessness during their time on the farm. Across the plot from where we talk, the skeleton of a new greenhouse rests on the ground, a testament to the growth and commitment of the GREEN TEAM women and their supporters as the farm expands into new capacities and utilizes urban space conscientiously.

“We’ve had some real bonding, especially with the women who stay long term,” Winnie says describing how the program has affected her thus far. “For the staff, this is one of the most rewarding things I’ve ever done. It’s very gratifying, you become attached.” I can sense the authenticity that Winnie and Loomis display as they speak about the farm and the revitalizing effect it has had on participants and staff alike. The GREEN TEAM farm is a place where passionate people are stretching their creative roots to respond to the crisis of homelessness in the Salt Lake Valley. The growth of the gardens and the women working it is unmistakable.

For more information about the The GREEN TEAM, visit wasatchgardens.org/green-team-farm.