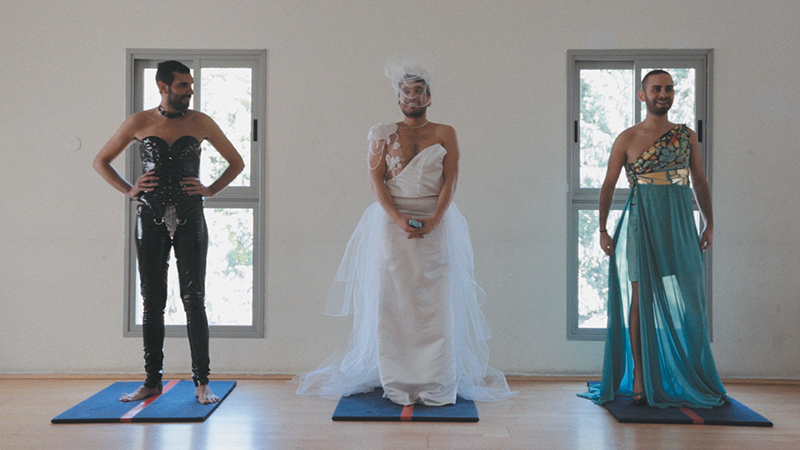 Since 2003, the Utah Film Center has hosted the annual Damn These Heels Film Festival (DTH), a weekend-long celebration of independent films that bring LGBTQ+ narratives to the fore. While the Utah Film Center is still recovering from the fire that devastated their offices in late March, they’ve forged ahead in preparation for the 13th DTH installment, held July 15–17, with a lineup that ranges from Slamdance gem Hunky Dory to Golden Lion winner Desde Allá. This year, DTH audiences will have the chance to watch director Jake Witzenfeld’s debut film, Oriented, a clear-eyed documentary that follows a year and a half in the lives of three gay Palestinian men who live in Tel Aviv, members of a self-described “new Palestinian generation that you haven’t yet had a chance to meet.”

Witzenfeld’s documentary manages to offer unblinking and deeply personal glimpses into these three lives without pretense, cliché or dogma—a difficult accomplishment when his characters’ very existences and identities, in all their multitudes, aren’t afforded the privilege of existing without politics. “There haven’t been enough films that are about people,” says Witzenfeld. “It always becomes formed in the political conversation. … But that’s the thing: You’re trying to tell something personal, but it doesn’t matter, because your characters are still political.” Throughout Oriented, Witzenfeld remains behind the camera and slightly distanced from his subjects—most of the dialogue was in Arabic, which Witzenfeld doesn’t speak. The film introduces viewers to Khader Abu-Seif, a charming activist who, at the time, was in a relationship with a Jewish Israeli (but Abu-Seif made sure that Oriented wouldn’t fall into any overdone plotlines regarding the relationship). We also meet Abu-Seif’s two close friends, Fadi Daeem, a nurse who pointedly—and sometimes divisively—declares his personal identity and political beliefs, and Naim Jiryes, who introduces himself as a “Palestinian, vegetarian, atheist and feminist” and had yet to come out to his family.

“I wanted to make sure that [Khader, Fadi and Naim] felt that it was their story and not like some straight, British, Jewish kid was re-appropriating their narrative,” says Witzenfeld. Oriented was a collaborative effort with Abu-Seif, Daeem and Jiryes, who were the first to see each cut and offer feedback. “For me, that meant highlighting those moments that felt like they were speaking the most truthfully,” Witzenfeld says. The director was first drawn to the three friends after noticing one of their short YouTube videos—made as part of Qambuta Productions, a collective formed by the trio of Palestinian advocates for national and gender equality—and how strongly it resonated with the Palestinian community within Israel. There’s also the intimate day-to-day of their lives in Israel, particularly in Tel Aviv—the filming took place over 2013 and 2014, encompassing the 2014 Gaza-Israel conflict. Oriented parses these cultural tensions through personal stories, forgoing fraught political implications for distinctly human elements: the small villages and involved family dinner discussions, a concert in Amman or the blithe nightclub stomping grounds, the camaraderie of the Palestinian LGBTQ+ movement, the wait in a bomb shelter after a bomb siren goes off. “We are trying to challenge and play with people’s preconceptions,” says Witzenfeld. “I would like people to come out from the movie and have an internal dialogue with themselves about what they thought before they went in and what they think now, after meeting Khader, Fadi and Naim.”

Paramount to Oriented are the conflicts and confluences within each of the three characters’ personal expression of his Palestinian nationalism and his sexuality. “The complexity of their identity is bonkers,” says Witzenfeld. “The fact that they can speak about it with such control, command and self-awareness inspires me enormously.” They defy categorization and carry the weight of being caught between worlds, but they continue to search for direction and a fulfilling sureness in their identity. Jiryes struggles to come out to his family, while Daeem discusses feeling less Palestinian than those who live in Israel-occupied territories—yet struggles with his ardent Palestinian nationalism when he finds himself seeing a Jewish Israeli. Then there’s Abu-Seif, who, in one scene, has to explain why he identifies as Palestinian, despite the fact that he carries an Israeli passport. There’s the thread of the title’s origin, too—it’s a nod to sexual orientation, but also to notions of “orientalism.” “The West has monopolized concepts of liberalism and of being out of the closet,” Abu-Seif says early on in the film—Oriented endeavors to illuminate an alternative and much less visible narrative.

“Documentary film is what moves people,” says Witzenfeld. “We are a generation that has learned to respond more than anything to film, to the moving image … That’s the way we should be raising awareness, inspiring change.” Oriented is quietly revelatory. It veers away from sweeping claims to political, cultural or social truth, and instead embeds its audiences into the personal stories of a minority that might otherwise feel far removed or be misrepresented. The documentary imbues viewers with a sense of honesty, tenderness and relatability from the three characters, their stories and the places and communities that they call home: “We are Palestine, we are queer, and we are here!”