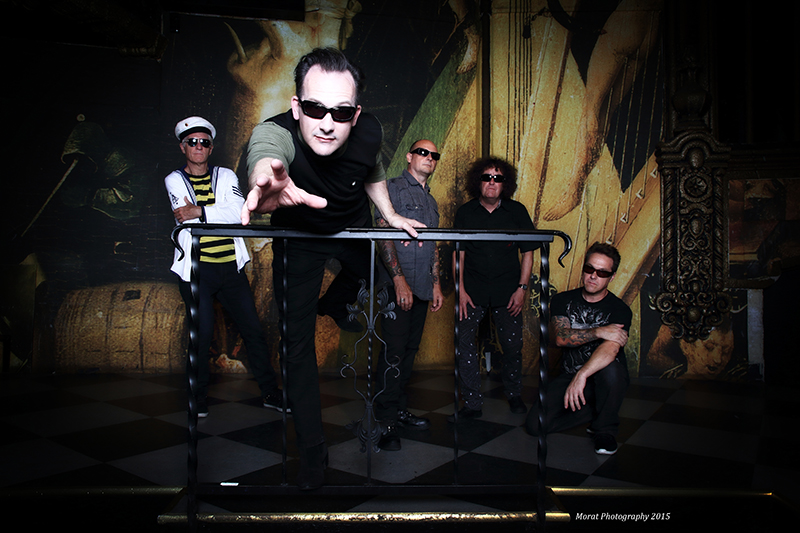 Damned and Loving It

Those who know their music history would tell you that 40 years ago, The Damned were the first punk band to release a single, press an album and then break up and get back together. The rest is a little complicated.

“Ask anyone who was around at the time, and they’ll tell you The Damned were the least likely to still be around all these years on—as a band and as human beings,” says Captain Sensible, longtime Damned guitarist and perennial punk jester.

Born Raymond Ian Burns, Sensible, like Sid Vicious, Andy Blade, Seymour Bybuss, Poly Styrene and many others from the “Class of ’77,” took on the stage moniker to distance himself from his real identity, “Ray Burns, ex-toilet cleaner from Croydon,” he says, insisting that audiences would much rather see a “flamboyantly dressed egomaniac showcasing all his Hendrix knock-offs.”

Like Sensible, The Damned have worn many masks over the years and have curated a sound that exists somewhere undefinable. “It’s pretty tough writing the setlist, as we are two bands for the price of one,” says Sensible, “having had a hand in the creation of two musical genres, goth and punk … Personally, I’d say we were alt-psych as well, but that’s just where I’m at.”

I was introduced to The Damned in the late ’80s, first through hearing “Grimly Fiendish” and “The Shadow of Love” at a local club when I was 14 or 15. I didn’t know much of anything, particularly when it came to subcultures. Before seeing vocalist Dave Vanian in his vampire getup, I just thought I was a punk in B-movie clothes.

The first album I bought was a secondhand copy of the two-disc retrospective The Light at the End of the Tunnel. In retrospect, it’s a rather strange place to start, particularly if you look at how it’s sequenced. In a sense, it kept me from ever having to engage in the “What is your favorite era?” conversations. For me, it was just different sides of the same coin. But what makes The Damned The Damned? Sensible goes back to the beginning, saying that original guitarist, Brian James, had the songs already written and went about forming “a gang that played with aggression.” Vanian, drummer Rat Scabies and Sensible on bass fit the bill.

“At a time when insipid music and hippies were everywhere, our performances would clear a room of the majority of the audience on occasion,” says Sensible. “Even a spikey haircut was enough to gain you unwanted attention of a fisticuffs nature.”

But when it comes down to defining what exactly The Damned’s sound is, Sensible suggests, “We’ve only ever done our own thing. It’s been a wonderful musical adventure for us, and I hope the audience too.”

Strolling further down memory lane, Sensible reflects on the band’s debut album, Damned Damned Damned, “It’s manic and riff heavy,” he says. “Nick Lowe did a great job of capturing the uncompromising nature of our 35-minute live set.” Since its release, the album has seen numerous re-releases. Its desperate push against the mainstream still resonates.

“We were just making the music we wanted to hear, ‘cos there was precious little around at the time that had any get up and go,” says Sensible. “Glam rock had packed the sequins and gone; all we had left was country, disco and prog.”

For Sensible it wasn’t just about raging against the establishment and music trends—it was an attempt to rise above the hand that he had been dealt. “I was trying to change my own world, ‘cos for me as a teenager with little education to boast of, I had a life of drudge ahead of me at best,” he says. At the time, Sensible was living in a Brighton squat, surrounded by junkies and “ne’re-do-wells.” “Then punk rock showed up and saved me,” he says. “Every band needs a chaos factor, and I became The Damned’s random, unpredictable nutcase—my dream job.”

I remember seeing the cover for Machine Gun Etiquette, the band’s third album and first without primary songwriter James, and thinking, “What do any of these people have in common?” There was Vanian, looking like he just walked off the set of Dark Shadows; Sensible dressed like the lovechild of Big Bird and a pink feather duster; Scabies in his lounge singer suit and new bassist (Sensible moved over to guitars) Algy Ward in his standardized Ramones uniform. Which, in a strange way, felt rather liberating.

Sensible agrees. “Mr. Vanian? I like the guy, but in almost every respect, he is my complete opposite,” he says. “In photos you’ll see my cheery smile, whereas he is very much the prince of darkness.”

Still, somehow it works, and the writing partnership has produced numerous classic tracks and has established The Damned as one of the most engaging live acts in any of their four decades of existence. “Whatever we happen to write as individuals, it always becomes The Damned in rehearsals,” says Sensible.

I first saw The Damned at the legendary Forum in London in 1995. It was an unusual time for the band that saw Sensible on hiatus and Vanian and Scabies, the only remnants of the original lineup, backed by hired guns. That night, The Damned avoided the majority of their more atmospheric tracks and goth-pop gems from the Phantasmagoria and Anything releases in favor of the more ruckus sounds of their earlier punk material and a handful of new tracks pulled from the Not of this Earth album. It was the second to last gig that Scabies, who had been the drummer since inception, would play with the band.

By the time I saw them again in 1998, Sensible was back in the band on guitars with Garrie Dreadful on drums, Monty Oxymoron on keyboards and Patricia Morrison, former member of Sisters of Mercy, The Gun Club and Vanian’s wife, on bass in what can only be described as a night of utter chaos at London’s Astoria 2.

Those British gigs had a crazed atmosphere, with beer being flung at the stage from all directions—a beautiful madness. The Astoria 2 was a powder keg set to explode with hundreds crammed into a smaller-than-expected space. Was that the night with Robbie Williams in the crowd? Yes, I think it was.

When I saw them in the States a few years later, it was an entirely different experience. The band, still in excellent form, was greeted by a much friendlier audience. No beer was thrown, no threats were made (to the band or otherwise), and the possibility of anything nefarious happening significantly diminished. While the U.K. shows felt more authentic, Sensible points out that if it weren’t for America and its “ongoing love affair with guitar music,” the band probably wouldn’t be celebrating its 40th anniversary. “There was a time in the U.K. when guitar shops were closing left, right and center,” says Sensible. “All the kids wanted to be a superstar DJ, and gig attendances reflected that. Without the U.S., we’d have quit a long time ago.”

For a band famous for its lineup changes, it is amazing to note that the current configuration, featuring Vanian, Sensible, Oxymoron, Pinch on drums and Stu West on bass has been together since 2004. The stability of the band has afforded the group the ability to improvise on the fly. “It’s all live with no choreography, autotune, mix cheating, rehearsed ad libs or stunts,” says Sensible. “There are some appalling TV talent shows around currently. I like to see us as the antidote to all that.”

Seeing as Sensible was on scene to witness the birth of punk, which was by its nature a rebellion against the politics of its day, I inquire about his opinion regarding the current political environment. It turns out that he’s a huge fan of the “fake news” debate.

“That’s been a long time coming,” he says. “People don’t like wars—they have to be lied to into supporting that rubbish, and we have to learn from previous examples. It was a genuine thrill when the Tories were booted out by Blair’s ‘New Labour’ project. But they took us straight to Iraq via ‘dodgy dossiers’ and a whole bunch of ‘fake news’ from the mainstream media.”

To fight against the current climate, Sensible suggests that rather than “pinning [our] hopes on the next politician promising change,” that we “think and buy local” and learn to sustain ourselves without relying too heavily upon outside help.

Looking to the future, the band recently announced a PledgeMusic campaign to fund a new release. It will be the first new music from the band since 2008’s incredibly underappreciated So, Who’s Paranoid?

Sensible likes the idea of having complete control over the new material. “We have never done anything to court popularity, just to please ourselves and follow our own path,” he says. “Seventeen minutes of Curtain Call was quite brave for a punk band. You should have seen the label execs’ faces when we delivered that one. This time ’round, there will be no record company people breathing over our shoulders. So expect the unexpected.”

Sensible and The Damned roll into The Depot on Tuesday, April 18. Expect one of the best gigs of your life.