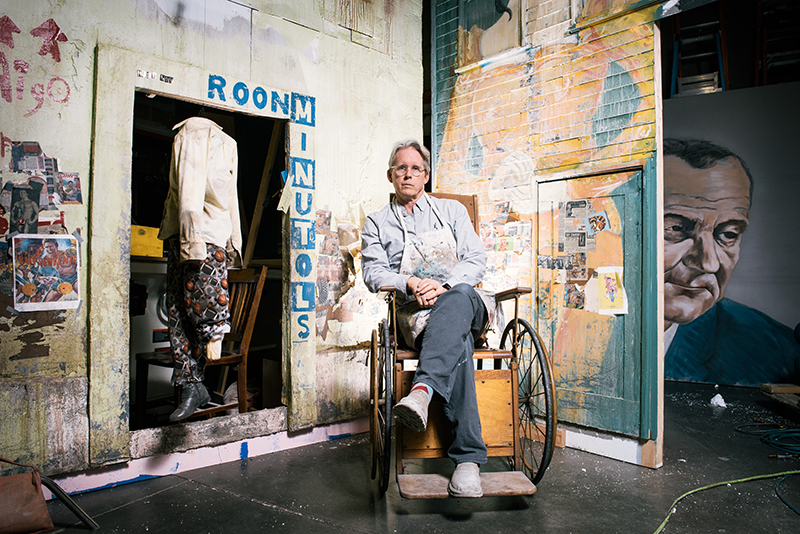 David Brothers is a local multimedia artist best known for film sets built for directors of both local and national renown. This commercial scenographic work, though frequently seen by many, hardly represents the full range of his talents. In a show at the Utah Museum of Contemporary Art (UMOCA), Brothers features close to 15 color photographic prints that reveal not just his panoramic vision but also his under-appreciated knack for capturing specific perspectives and unique moments. The show, obscurely entitled Rolithica, debuted Jan. 29 and includes both a full-scale installation and photographs capturing select glimpses of Rolithica, an artificial reality that exists principally in Brothers’ imagination. “It’s an invented place,” Brothers says, “one inhabited more by derelict architecture, props and dummies than real people.”

The cultural detritus that the world Rolithica comprises creates an implicit, visceral sense of forgotten narrative, lost history. Simply put, David Brothers assembles and documents large-scale, artificial ghost towns with the same imaginative eye that an archaeologist might bring to the reconstruction of uncovered ruins. With the exception of the installation piece, Brothers considers photographs the ideal final format in which to present the cosmos of Rolithica. Despite working in a flat medium composed principally of light and shadow, Brothers’ understanding of photography remains highly material and gestural, like a daily process of rag picking. “I think of photography as a form of building,” he says. “When I take photos, I feel myself to be collecting and composing patterns, colors and textures into larger compositions. Photography is never far removed from my need to carve, build and decorate.”

“Perhaps I’m being too modest,” says David Brothers, “but I still don’t consider myself a real photographer.” Brothers hardly dismisses that art form, however, and indeed mentions a number of photographers who deeply impress him—in particular, he likes the photography of artists such as Roger Ballen, who has worked extensively with Die Antwoord. “I admire his way of filming the gritty and grotesque admixture which is South African township culture,” he says. The UMOCA show will present Brothers’ two-dimensional work in conjunction with the aforementioned constructed set. At the time of this interview, the set was still to take on its finished form, but so far appears to be a cavern cut from hundreds of square feet of industrial Styrofoam. The structure is impressively large—one could crawl through its tunnels.

When I approach David Brothers’ studio, I find myself suddenly within a hangar strewn with an odd array of antiques and curios selected from various decades, as well as a number of set paintings harkening back to eras ranging from the Great Depression to the Vietnam War. These sundry oddments range in size from the monumental (a massive painted portrait of Lyndon B. Johnson) to the miniature (sewn dummies, toy shoes and kindergarten furniture). It is a web of temporal and spatial contradictions, a space populated by objects whose origin, function and relationship seem anchored solely by the presence of Brothers himself. “I’ve been rescuing and collecting props for years,” he says. Indeed, you can see the growing collection expanding throughout Brothers’ warehouse studio. “At present, I am fascinated by modifying discarded shoes and other castaway items,” he says,  “as well as exploring the kind of curious objects that accumulate around roadside shrines and memorials.”

An evenly graying bespectacled figure, covered in Styrofoam dust and seated in an antique wicker chair, “I’m just an old guy in Utah,” David Brothers says nonchalantly. To lend evidence to his claim of being a curmudgeon, Brothers proceeds into a minor rant about his frustration with major tech corporations and their propensity to discontinue software that he considers vital to his work. “I had many, many gigs of files I could no longer treat and had to throw away,” he says. “But fuck it.”

Old guy or not, David Brothers’ work remains intractably rooted in a youthful spirit of irreverence and rebellion, one he contracted as a Utah outsider of the ’70s and ’80s. Brothers’ memories are centered mostly around alternative media. “For a brief and exciting moment, certain persons were able to sneak into the establishment and subvert it,” he says. “It was a time America was not yet saturated in irony, and Jimmy Carter could still shock the nation by confessing to lustful thoughts in Playboy magazine. It was then I realized I could do art by myself, in my own way.” Rolithica, which is composed of glossy, high-resolution images of ersatz storefronts and derelict billboards, represents Brothers’ own effort to use the sleek technology of the film industry in defiance of the industry’s own intentions.

Another crucial influence on David Brothers was Dennis Hopper’s film Easy Rider, which he sees as utterly groundbreaking. “In retrospect,” Brothers says, “it’s not a great film, but it still produced some powerful, disruptive and iconic images.” Easy Rider created a kind of countercultural or marginal mystique that figures in Brothers’ photographic art, which aestheticizes abandoned personal objects and derelict public spaces. Though not interested in glamorous faces or figures, each of Rolithica’s images relates a monumental film still, full of ambient energy not yet condensed around a human body, but hovering around and between inanimate puppets and other objects.