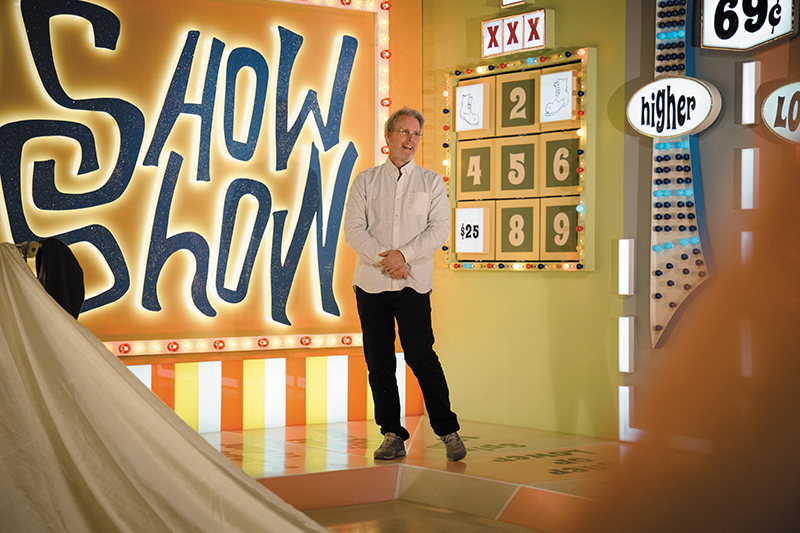 David Brothers’ The What a Show Show

David Brothers has spent many years in the film industry. He is well-known for his film sets and installations, and has built on a career as a scenic artist. Basically, “I run the paint crew,” says Brothers, which is a humbly simplified description and an understatement. “It’s a nice place to be. It’s fun, good, hard work,” says Brothers. A physical timeline of his career is stacked and standing in partial pieces and wholes in his Westside SLC studio, which he has rented for nearly six years now from a “big corporate mega-monkey” that “has no soul,” says Brothers. The outside is an admittingly drab and industrial box, but serves as a veil for what lives inside. Dozens of brightly colored photographs are tacked on the walls in the front room above pieces of equally colorful, antique furniture. A pile of film and Polaroid cameras sit on an antique couch, beside an antiqued chest upon which sit boxes of old-fashioned Rice-A-Roni and Hamburger Helper, tokens of his current passion project, a film called The What A Show Show.

Brothers was intrigued with ’70s game shows and embarked on a still-photography project, which will soon become his first film. “I started casting characters for what I thought there was to photograph,” says Brothers. But during his Rothilca installation at the Utah Museum of Contemporary Art, the curator encouraged him to get back into film. “I thought about dinking around with film with The What A Show Show project, and next thing I know, it turns into a feature film,” says Brothers, “and all the nightmare that’s associated with that”—he laughs.

He understands filmmaking, but the significant strides made in film technology have proven to be somewhat of a challenge. “I haven’t made a film since the VHS days,” aside from co-directing a 16-mm film production called It Is Fine! Everything Is Fine, which made an appearance at the 2007 Sundance Film Festival. Essentially, “I was smart enough to know what I was getting into,” says Brothers, while still admitting to a bit of naïveté.

To balance the project demands with day jobs, the team has consistently shot for about six hours each Sunday, for two years. “I did the math, and that adds up to about what it takes to film a feature film,” says Brothers, which is typically around 90 minutes of run time, but only takes a few months to film if you’re doing it full-time.

When it came to casting, because the project was not initially for film, Brothers practically cast anyone who showed up. Photography remained part of the project, but when the focus evolved into a film endeavor, the storyline inevitably had to pivot. “I had to learn what each person was good at,” says Brothers. He wrote—and often rewrote—the script to tailor to the strengths that surfaced throughout. One actress, for example, turns out has actually been on The Price Is Right “and really knew how to fake excitement,” Brothers says, which fueled inspiration for the show component and the film, overall.

The movie itself is based on a ’70s game show that “should have been canceled years ago, but for some reasons hasn’t. That’s the first part,” says Brothers, with a foreshadowing tone. “Then, it gets into fantasy with a dark synopsis.” Brothers dramatizes the greed, anxiety, frustrations and excitement that contestants on game shows actually feel, which often leads to peculiar behaviors. “The film builds and builds, and at one point, there is a giant battle and sort of turns into Moby Dick.”
Basically, there is a conflict between the show, the host and the people. “I see the antagonist as a corporate shill,” says Brothers, who has become a self-proclaimed “sucker for advertising” and deconstructing the industry’s creepy and insidious tendencies. What first began as an interest in color and lights eventually grew into a fascination with total meltdowns in front of millions of Americans, surrounded by Vegas-style lights and sounds, topped off with a projection of Hamburger Helper. “It was so absurd and surreal, I had to play with the notion,” says Brothers. “No one gets that excited about Hamburger Helper.”

At his core, Brothers is an artist first. He experiments and delves into complexities within the human experience, both organic and constructed. In every project, there is a message that he hopes to convey, whether by displaying his work or submitting it to festivals, magazines, or posting it online. The film is tentatively slated to be completed this month, and Brothers is brainstorming for a unique wrap party and proper tribute to the film, given how much time and effort has been poured into it.

Brothers is wrestling with if, when and how to break down his large set and place some or all of it in an empty storefront at the Gateway for all to see at the end of Summer. Having seen the set tucked away, I personally hope that he seizes the opportunity—if not to share how his film, photos and set, and tackle issues of consumer calamity, greed and the wily ways of gameshow dynamics, then at least to demonstrate that art is very much alive and well in today’s world, with some of the best in our own backyard. In the meantime, check out some of the photos and more of Brothers’ work at davidbrothers.net.