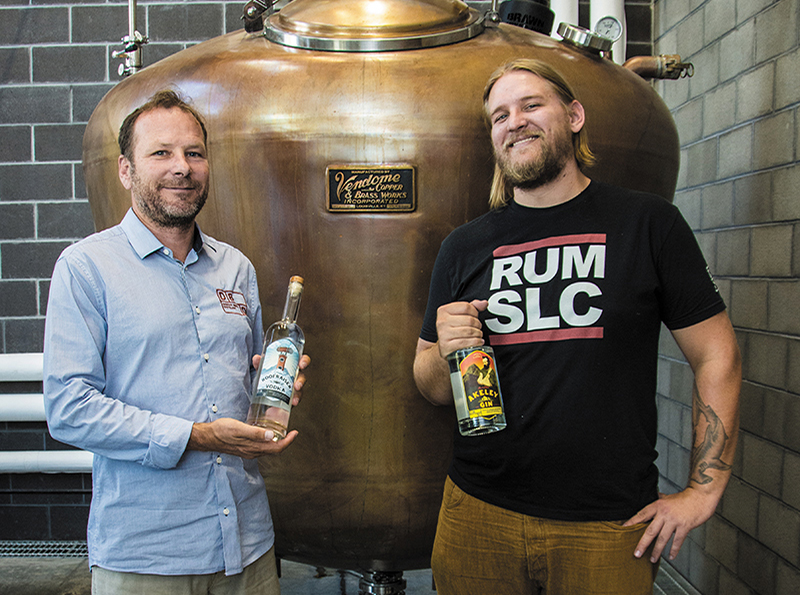 Dented Brick Distillery takes its name from the remains of the property’s former structure. “We pulled the bricks down with our hands and even kept the dented ones,” their website says. Dented Brick wanted to keep the history of the community intact. Even standing outside the three-story structure reminds me of the remains of a Scottish castle. Perhaps Spynie Castle in Elgin, since it was created with remnants of itself after every attack. Dented Brick has a 28-foot Vendome copper still that raises the roof in a similar castle-like manner. Even its 14,000-square-foot distilling floor is just 4,000 square feet shy of a small castle (and 560 times larger than a bouncy castle). Eventually, I meet Ethan Miller, a giant Scandinavian man, and my suspicions are confirmed: Dented Brick has finally shaken Utah’s subtle speakeasy history and built a giant, booze-filled castle in South Salt Lake. You can even buy spirits there during working hours to avoid the bath-salt insanity of state liquor stores.

The giant Scandinavian, Miller, is the Head Distiller and resident Viking. He takes me on a tour of the facility and I witness the 16-plate still from the inside (plates are rectification columns). Much like staring up a massive stairwell, I find my head following each plate to the top of the extended ceiling. Each plate represents a point where the alcohol is evaporated and then returned back to a liquid. Some lesser distillers refer to these plates and their process as distill times, which is incorrect. “The entire 16-plate process counts as one instance of distilling,” says Miller. So, the next time you’re at the store and a vodka is boasting “Distilled Four Times,” be wary if the bottle is also plastic. “Plus,” Miller adds, “if you have to distill it that many times, you probably have bad raw materials.” More of the tour offers an additional impression of cleanliness. I rub the tip of my shoe against the concrete floor to check for dust and get nothing. Miller leads me to a front conference room, where I see a table with several bottles and glasses. He pulls out a chair for me, smiles and says, “Would you like a drink?”

I’m now joined by Marc Christensen, Dented Brick’s founder and charismatic self-promotor. Christensen is sharing his adventures in getting the word out on his products. The first spirit they produced was a clear rum called Antelope Island. Since then, Christensen and Miller have been hard at work getting their next two products up and running. The now available vodka, called Roofraiser, sits in the first glass in front of me. Roofraiser’s name comes from the obvious roof-raising of the building required to fit the 28-foot still. I’m being coached to breathe out so I don’t oxidize the spirit and compromise the flavor. I tip it back and Christensen says, “Just roll it back and forth and feel the heaviness. That means it’s unfiltered … unfiltered with non-GMO grains. We also use onsite well water, which adds to the heaviness and full taste. The sweetness you taste is the wheat, and the spice is the rye.” I keep waiting for the burn I usually experience with vodka, but it never shows up. It’s smooth and warm like a snuggle. I imagine my cat Douglas snuggling on my face as I sleep (from the cat’s perspective). For non-cat people, imagine that feeling you get when you look outside to see you’re snowed in and work has just been canceled. I look around the room and see Christensen and Miller’s rosy cheeks smiling back at me. They are proud of their product—as they should be, because it just hit my system, and I feel super.

Miller pours me a second drink, and this time, I’m trying their Akeley Gin that just came out on Sept. 15. Carl Ethan Akeley was Miller’s great grand uncle, conservationist and all-around adventurer. Today, he’s inspired a beverage that’s being swished thoroughly in my mouth. “It’s a new wave American gin that borderlines a jenever gin (first style of gin),” says Miller. “We use rooibos tea, orange peel, lemon peel with a just footnote of juniper—all organic—in the creation of this gin.” He’s exactly right: I taste all of this, which is a shock because at most wine tastings, I just smile and nod blindly. This gin is full and thick like the vodka and, honestly, like nothing else I’ve ever tasted.

Later on, I’m walking with Miller and learning that their spirit identifications (rum, gin, vodka) are extremely general with regard to their flavor. Christensen walks me out with a quick story about acquiring the original, Utah-distilled-whiskey recipe from the distillers in competition with Brigham Young, L.W. Hardy and Hugh Moon. I smile because these guys are getting it right and are really doing Utah proud. If Dented Brick can make gin taste like a tropical treat, I can’t wait to see what they do with whiskey. I step out of the distillery like an inspired knight leaving the castle on a quest—a quest to tell the world of these magical drinks.