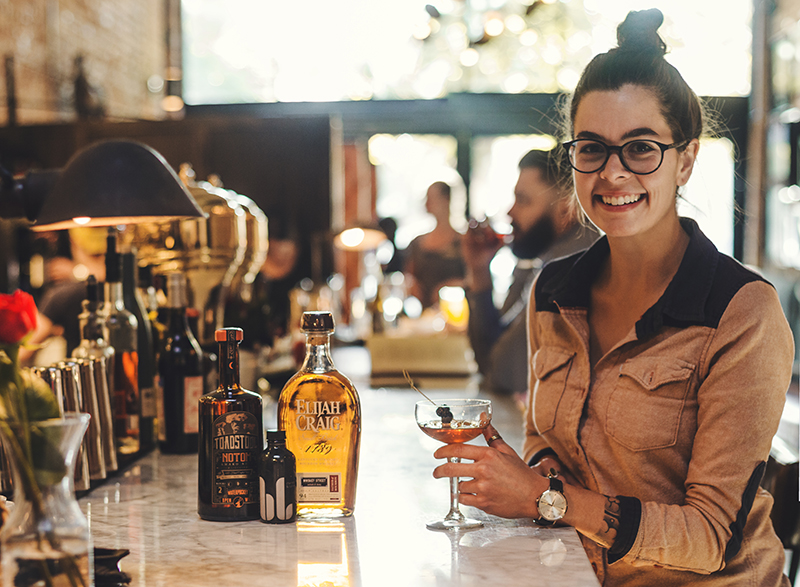 What goes into your cocktail goes beyond gin and juice. Here in Salt Lake City, we’ve been given an opportunity to explore this craft lifestyle in the form of locally owned bars bent on bringing our community the luxury of the liquor spreading out from the cultural capitals of the world. In the booming and only somewhat metaphorical oasis that is this city, there’s something everyone can agree on: When at the watering hole, it’s time to drink! It may not be Prague, but if you walk into any of these bars—Copper Common, Lake Effect, Water Witch and White Horse—and forget that fact, you’d be forgiven.

Saying that the inside of White Horse is like the architectural manifestation of a femme fatale in tune with the world may or may not make sense to you. What will make sense is that the minute you step into this visually seductive ambiance, you are going to want to stay for some time in the hopes of getting something akin to a glance in your direction or a phrase dropped idly but which could very well stick with you. Inspired by the European brasserie, you can very well get a sense of becoming lost spatially and maybe temporally—although the bar has a very “of-its-time” sensation, the European version of modernity being an infusion of present and past.

The kitchen is largely influenced by the French and their love for succulent, slow-cooked meats, joined on either side by an aperitif to start and a digestif to tidy up. The menu has a long selection of amaros with which to sip and socialize, ranging from the classic Averna to the more experimental Zirbenz Stone Pine Liqueur. But stepping away from the bittersweet boozes and into something to pair with the meal, the bar has selection of 10 different ciders on draft including a delicious, dry Bull Run Cranberry. The wine menu is equally extensive, but don’t expect the sauvignon to be on tap. We’re just not there yet.

If you’re unsure as to what would go well with the duck breast that’s nestled into the space between your fork and knife, the service staff are more than competent on the issue. Don’t fret when it’s gone, though. The kitchen gets oysters delivered from the Pacific Northwest within 36 hours of them landing in the net. If that’s not fresh, you’re not reading this.

But going past the palette of the plate and into the craft of the glass, White Horse’s cocktail menu rotates every three months or so and floats around their selection of amaros for a unique and spicy flavor profile. All but a couple of drinks on their house menu contain something off the list of aperitifs. So settle into a booth, try the amaro on its own, move on to a cocktail that contains it, and search for its flavor in the swirl of European taste.