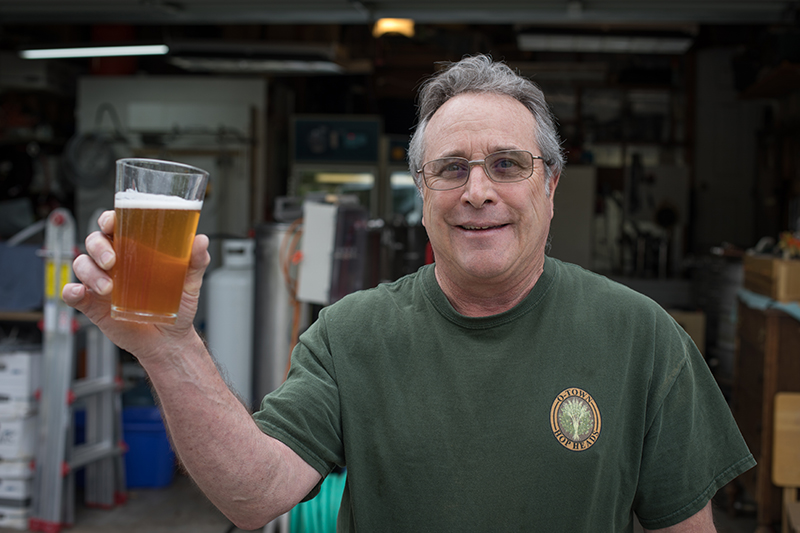 From Dregs to Richness: Pat Winslow on Spontaneous Fermentation and the Rise of Sour Beer

Spontaneous brewing has been around for centuries, but it has realized a resurgence in recent years. Utah-based competitive brewers Pat Winslow and Rob Rutledge have arisen with their own takes on this classic style. Spontaneous brewing involves the cultivation of wild microbes to assist in your brewing process. In order to achieve the tart pucker of a sour beer, a microbe that makes the brew acidic is required. You might have sampled these multifaceted and delicious draughts when savoring Red Rock’s Paardebloem, Squatters’ 529 or, of course, Epic’s ever popular Tart ’n Juicy Sour IPA. These two brewers discuss spontaneous brewing, sour beers and where the culture is currently headed.

SLUG: How and why did you start home-brewing? Did you have any past experience with microbiology before you began?

Pat Winslow: My never-ending “quest for the best” craft beer began in the fall of 2006, when I haphazardly strolled into a homebrew shop downtown … Today, I have a Certificate in Craft Beverage Management from Portland State University and I am a recognized BJCP beer judge. I have the capacity to brew two barrels, 62 gallons of beer at one time, but I still brew 10-gallon batches three to four times a month, March through December, as I continue to work on refining recipes and honing brewing processes. I soon will have completed work on my indoor electric brewery, which will allow me to brew year-round.

SLUG: Tell me a little bit about your experiences with Union Station Fermentation and Beehive Brew Offs and how these experiences fit into your all-around brewing practices.

Winslow: It was during that period of time that I worked at Union Station Fermentation in Ogden, 2013 to 2014. In addition to handling day-to-day responsibilities related to the retail operation, I started classes for people interested in brewing beer. The beginner class covered basic processes and demonstrated the relatively simple steps of brewing beer from extract kits. The advanced class was based on all grain-brewing processes and dug into recipe formulation and how each of the ingredients and their respective properties related to the flavor profiles and contributed to the final product.

I enjoy competing in brew competitions and just recently sent seven entries to the National American Home Brewing Competition. I received good scores in the first round but did not advance to the finals. I have placed four of the last five years in the Beehive Brew Off in Salt Lake City.

SLUG: What is spontaneous yeast brewing? How does it, specifically, create a low-pH beer?

Winslow: The world of spontaneous fermentation is a fascinating place. It is as old as beer itself and as new as 10 seconds ago. One story I read said that beer began on an ocean voyage as grain and water that was accidentally mixed together in the ship’s storage. Since that was the only water for drinking, the sailors reclaimed the water, and it began fermenting spontaneously. Needless to say, they were happy sailors and thus began combining water and grain with intention, hence beer.

Two of the common microbes are Brettanomyces, or Brett for short, which is a yeast, and Lactobacillus, which is a bacterium. Brett characteristics are commonly referred to as “funky or barnyard” and sometimes “horse blanket.” Brett fermentation results in alcohol production, whereas Lactobacillus, or Lacto for short, results in lactic acid that presents itself as a sour flavor because of the reduction in pH. They are commonly found together in both nature and commercially available blends. These wild strains are often used in conjunction with saccharomyces strains to achieve a specific flavor profile.

SLUG: What do you think is the appeal to this kind of flavor in a beer?

Winslow: I think the current popularity of sour and funky beer can be attributed to a couple factors. First, I think all of life and the corresponding stimuli evolve in cycles. Perhaps we are rediscovering what our ancestors enjoyed hundreds of years ago. Or, maybe I’m just full of crap and people are finally tiring of over-hopped IPAs—could go either way. I only know that I really enjoy the unique nature of the style, from the first aromatic scent to the often tart, fruity and dry finish. It generates a craving for more, for the next step up, which keeps me trying as many of the new offerings as I can find.

SLUG: Can you give some insight into the difference between fermenting with Lactobacillus vs. Brettanomyces? Do you use any other organisms for your souring process?

Winslow: When I contemplate a beer that I intend on being funky or sour, or funky and sour, I first try to imagine what that beer will be like in my nose, then in my mouth and finally in my throat. With that as a guide, I try to determine what process or combination of yeasts and bacteria will most likely cause the desired effect in the beer. What character should be upfront? What should the middle and finish be like?

How do I achieve the desired layering of the profile? As I answer those questions, I begin to develop a plan for brewing and fermenting the beer. Keeping in mind the specific character of Brett as being funky and Lacto as being sour, do I want the funk upfront or the sour upfront? Do I want to start fermentation with a Saccharomyces strain or with a wild strain? I may want to throw some Pediococcus in the mix. It’s big, wide world of choices. More often than not, I will blend different beers together to arrive at what I feel will be a delightful and memorable offering.

SLUG: What about your specific brewing process makes you unique?

Winslow: One aspect of my process that sets me apart from other home brewers is that I have successfully harvested and propagated wild yeast from my backyard and used that yeast in beers that I have entered in competition both locally and nationally. Although I have not won medals in those specific categories, my beers have scored well. Secondly, I have an ongoing barrel-aging project that consists of six barrels. I began in 2015 and have produced a variety of sour beers in differing styles. Some I like better than others, but learning what doesn’t work is sometimes more important than learning what does. Lastly, I have a huge imagination and passion for trying new things. Failure is not an obstacle, but an opportunity to expand my ability to grow and think critically.

SLUG: What are some of your favorite readily available sour beers, and where can they be found?

Winslow: I generally do not purchase the same beer on a recurring basis. I think more in terms of breweries or producers. Some of my favorites are: Allagash Brewing Co., Crooked Stave, Russian River, New Belgium, Jolly Pumpkin, Anderson Valley, Yazoo, Odell and countless more. I’ve been to the Great American Beer Festival for the last five years, and I pursue mainly sour beers of the 3,000-plus beers available. I think the sours produced locally are good as well, but the variety is a bit limited.

SLUG: Are you a part of a home-brewing community in Utah/Salt Lake City? If so, how could someone new to home-brewing become involved?

Winslow: I have been a member of the O-Town Hop Heads brew club since it began around 2006. We have a very active club, with around 70-plus members. We have annual events like “National Teach A Friend To Brew Day” and “National Home Brew Day.” We have our summer/fall family barbecue, Christmas party and many different types of competitive events. On April 17, we did a competition at Talisman Brewery in Ogden. I placed first of 21 entries with “Shoot Your Rye Out,” a rye IPA. Our club boasts four BJCP beer judges, of which I am one, and many folks with several years of brewing experience. Anyone interested in learning how to brew or looking for a community or brewers to get involved with can find us on Facebook.

July 2017 will bring a close to my career at Union Pacific Railroad and give birth to a new chapter in my life as I open Pat’s Taps Brewing Co. in Ogden. Watch for a grand opening event to be announced spring of 2018.

If you haven’t tried out the aforementioned local brews, you can start on the national stage with sours from Allagash Brewing Co., Crooked Stave, Russian River and New Belgium. For the fledgling home-brewer thirsting to get involved or a well rounded wort-wizard searching for a community, there are always local brew clubs to participate in. Winslow runs with O-Town Hop Heads brew club (o-townhopheads.org). Best of brewing to you all and pucker up!