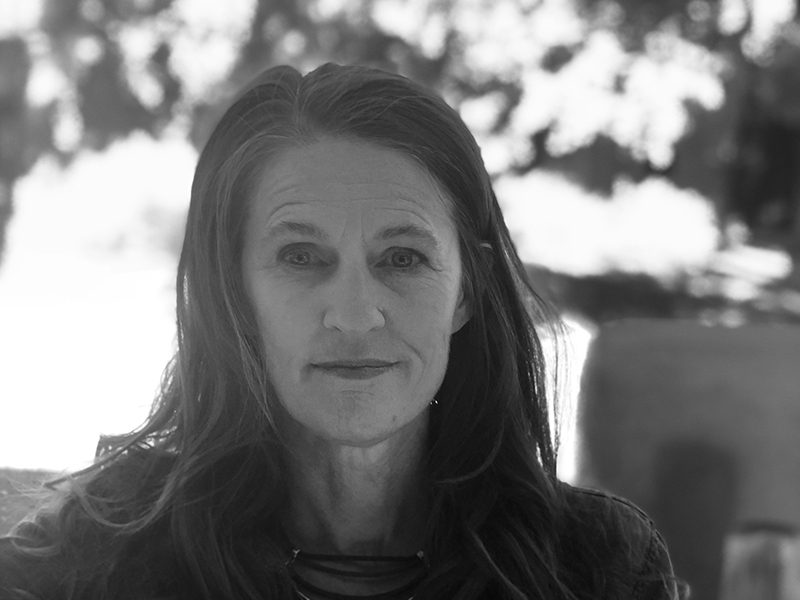 Utah native and eco-feminist author Amy Irvine has been to the desert in deep contemplation of a world currently in chaos. At the 50-year anniversary of Edward Abbey’s Desert Solitaire, a long-cherished essay regarding hegemonic masculinity and the destruction of the wild, Irvine has made her retort. Desert Cabal: A New Season in The Wilderness, published via Torrey House Press, is Irvine’s brilliant, expansive and intersectional examination of modernity, colonization, racism, misogyny and gender violence swirling within the commodification of land. In examining these things, Irvine queries Abbey’s notions and motives, challenging the critical growth edges he missed five decades prior.

Irvine’s mission to become a voice for a kinder connection of humans and nature sprang from the personal and the political. “In my travels to various public lands around the American West, my concerns about the way the land was being mistreated nudged me toward working and writing on behalf of the last, best wild places,” she says. She earned a degree in Women’s Studies at the University of Utah, and began to observe the how “human injustices complicated environmental ones,” she says. “Then Trump happened, and Weinstein and Kavanaugh. When I was asked to write a response to Abbey’s Desert Solitaire, 50 years hence, that material suddenly felt like it had a real trajectory, a more palpable and urgent relevance.” 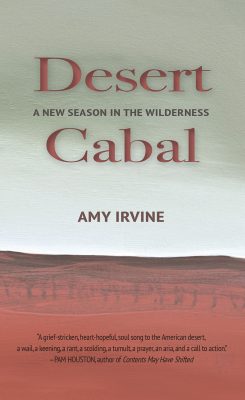 Desert Cabal is an 18,000-word, long-form essay. This iconoclastic inner discussion with her predecessor, Abbey, is fascinating—wherein she challenges Abbey to consider his myopic, privileged perspective without failing in her deference for his attempt to raise consciousness an entire generation prior. With respect to her furtherance of the conversation, she says, “If his misanthropy was feigned—more a literary device than a real perspective—it may have turned genuine were he alive today. I wonder, too, if he would have changed his attitudes toward women and nonwhites—in this age of Standing Rock, Black Lives Matter, Me Too and the concentration camps filled with parentless children on the U.S.-Mexico border. God, I hope so.”

Irvine is indeed seeking to drum up a different dialogue and practice around the patriarchal origins of being in and fighting for the wild—and the often grossly individualistic entitlement to wild spaces and resources. “I’m trying to explore the gray areas—places where the harsh divisions between wilderness advocates and anti-wilderness advocates fail, due to similarities. I am also interested in complicity—for we’ve all impacted Utah’s delicate desertscapes, motorized or non, meaning what is my part and what parts do my left-leaning, environmentally minded friends and colleagues play?” She reminds that meat is one of the leading factors of climate change, for example, and expresses her interest in the mutual relationships of people on both sides of environmental issues: “The wilderness advocates take serious issue with the ranchers, and yet nearly every upper-middle-class white person I know is on some form of a paleo diet,” she says. “Why not just admit that and see how it might be if we were in relationship with one another?”

Not blind to her own vulnerable, human limits, Irvine takes a solid third-wave, intersectional-feminist stance in Cabal, and apparently in her life entirely. “I am all too aware of my own position of privilege as an able-bodied, educated white woman,” she says. “I feel it is my duty to use that privilege to help others attain visibility, justice and opportunities—all the while challenging anyone who uses their position of power at the expense of a person, or a people, or the natural world.” She also grapples with the common question of whether the planet will still sustain us, our efforts to scale back our consumption levels and carbon footprints notwithstanding. “The fear of there ‘not being enough’ is a real one, and the dangerous byproduct of that fear is white nationalism—which is especially dangerous when it’s coupled with a sense of entitlement,” she says. “As wilderness advocates, we have largely avoided looking at the clear intersections between protecting natural resources and poverty, racism, sexism and the likes. Yet social injustice is absolutely bound to environmental injustice.”

Irvine posits that the recreationalist culture and limited perspectives on stewardship warrant expansion and revision, a notion that may be unpopular yet critical among Utah’s Subaru-driving weekend-warrior ilk. “How about examining what in our own lives has us racing out there to recreate so feverishly?” she says. “There’s a line in the book: ‘The land’s not the thing, it’s the buzz.’ I see so much of this intense adventuring and athleticism out there. I’m not trying to shame anyone, and lord knows I’ve been that person, but what if we stayed home, burned less fuel traveling to the edge of wild places? What if we cultivated that wildness in our own hearts? I think we’ve been asking the wrong question. It’s not ‘how do we protect what’s left?’ It’s ‘How do we stop trying to access what’s left?’ Because the drill rigs we want to keep off Utah’s public lands—they put fuel in our cars so we can go adventure in the Bears Ears!”

In Irvine’s concluding remarks in Cabal, she charges the reader to “no longer duel in dualities.” Irvine expands on this concept with a poignant analogy. “The five tribes that came together for the Bears Ears had never come together before. There were centuries-old wounds, deep divisions—but they put them aside for this one common vision that they shared, to protect land that was sacred to all of them.”