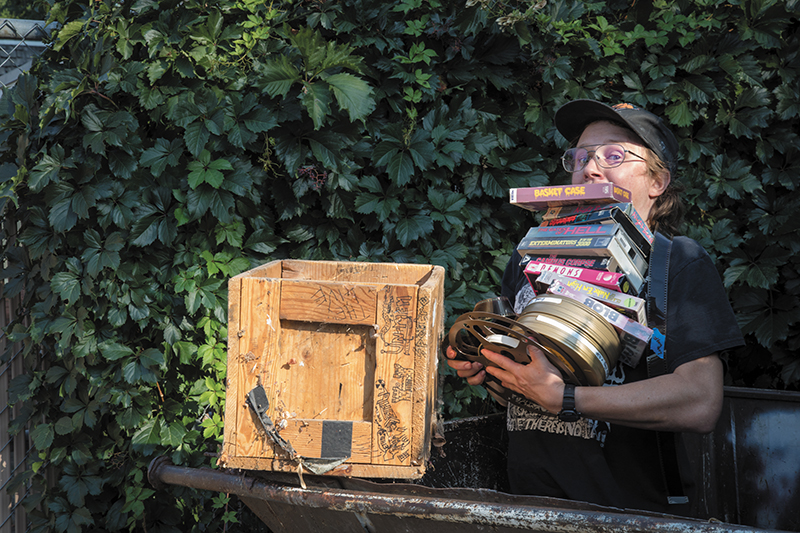 There are times when cinephiles need to take a break from their steady diet of well-made, neatly polished art house films in favor of a concentrated shot of superheated garbage. It can be hard to admit that when we’re not watching surrealist foreign films at the Broadway, we’re delving into our secret stash of Phantasm movies, but acceptance of our darker, trashier natures ultimately sets us free. Just like every gourmand has a soft spot for Taco Bell, every true cinema fan has their filmic equivalent of fast food that they just can’t get enough of.

For those who like to belly up to a schlocky B-movie with a group of like-minded movie nerds, local videographer Brock Grossl and the welcoming staff of Brewvies Cinema Pub have got you covered. For one year straight, Grossl has commandeered the first Wednesday of the month for Cinema Trash Night, his big-screen love letter to films that are so terrible that they’re actually brilliant. “I got into horror movies when I rented the 1970s version of Dawn of the Dead,” Grossl says. “That started my plunge into weird, old, crazy violent movies.” He co-founded Cinema Trash Night with his friend and punk rock collaborator Nick Sanchez. “He and I actually talked about doing this for years, and he was integral to getting this started,” Grossl says. “He helped make the first one happen and said if we can keep getting asses in seats, we can keep it up for as long as they’ll let us.”

Grossl christened Cinema Trash Night one year ago this October with the 1985 cult film Demons. “I love Demons so much because it embodies so much of what I like,” Grossl says. “Heavy metal, guys riding dirt bikes and chopping zombies up with samurai swords—and it takes place in a movie theater too!” Since then, Cinema Trash Night has screened gems like the overstuffed Chuck Norris action flick Invasion USA and From Beyond, Stuart Gordon’s lesser-known stab at adapting H.P. Lovecraft. “It’s mostly centered on what I call classic horror, but there are some pretty gross action movies around,” Grossl says. “I plan to get some sci-fi in there too. There’s a good stretch of post-apocalyptic movies that are indeed trash.”

As we discuss some of our favorite picks from the vast, moldering garbage heap that includes forgotten Troma films and early Peter Jackson gore-fests, our discussion eventually turns to the moniker of “trash cinema” itself. The films that Grossl curates and selects are a special breed of movie—films that were made with the intention of being serious or truly frightening, but ended up being enjoyable because their attempts failed in an entertaining way. “I think the passing of time makes these movies better,” Grossl says. “A lot of old movies were just trying to do their best with what they had, and they were willing to experiment and try to get away with more stuff.”

The fact that these films became something different—and somehow greater—than what they originally set out to do makes them especially appealing to a large gathering. Whether we’re hardcore movie fans or not, all of us know the joy of getting a bunch of friends together for an evening of bad pizza and bad movies. “There’s definitely a group of regulars that have made it their monthly ritual,” Grossl says. “People usually laugh and make comments—it’s the same vibe you get when you watch a movie with some people on your couch.” Cinema Trash Night is always free, which encourages veteran attendees and newcomers alike to partake in a visceral, sticky good time at the movies.

One of the mixed blessings of running an event that champions older films is that you tend to see the lives of a few cinematic masters reach their final reels. After George Romero died in July of this year, Grossl decided to cancel the August screening of 1990: Bronx Warriors to pay homage to the master of the zombie genre by screening Day of the Dead. September saw Bronx Warriors getting bumped again to honor the passing of Tobe Hooper with a screening of The Texas Chainsaw Massacre Part 2—“I’m starting to think 1990: Bronx Warriors is cursed,” said a post on the event’s Facebook page.

Grossl and I wrapped up our discussion about the existence of contemporary trash movies—films that were made within the last 10 years that might end up on Grossl’s list of screenings—and it’s hard to pin down anything of note. “There’s the Hatchet series, which is just a guy in the woods hunting people down with a hatchet,” Grossl says. “They’re not good, but they have super great effects—all practical, too. You get that stretchy, gooey, visceral carnage.” Jim Hosking’s filthy Sundance entry, The Greasy Strangler, also pops up in our conversation, but it just seems like they don’t make trash like they used to. “I don’t experience the thrill of seeing something super gory and absurd happening in theaters today,” Grossl says. I guess that’s why he’s doing something about it. Attendees of Cinema Trash Night can expect nothing but the finest in cinematic gore and absurdity.

Keep up to date with Cinema Trash Night’s screenings by following them on Facebook (facebook.com/SaltLakeCinemaTrash), and check out Grossl’s freelance page at vortexvideos.com.