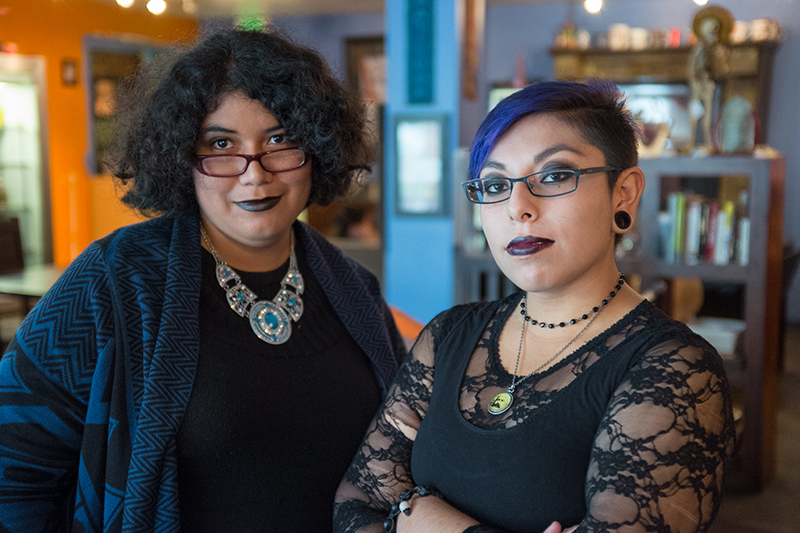 Familia: An Interview with Ella Mendoza

In the past couple of years, Utah has incubated many fantastic local organizations that help Utah residents in various ways, but few are quite as badass as Utah’s Familia: Trans Queer Liberation Movement. You may have seen them marching in the 2015 Utah Pride Parade shouting, “Not one more!” or at rallies at the Capitol. But if you’ve missed out on any of their speeches or events, it is all going to change with the increased following this incredible group has gained.

Utah’s Familia is a chapter of the national Familia organization. It was founded in early 2014 by trans and queer immigrants, undocumented allies, youth leaders and parents. They are the only national organization that addresses, organizes, educates and advocates the issues most important to LGBTQ communities while also focusing on trans and gender-nonconforming [email protected] Some of these issues locally include building more gender neutral bathrooms around the city, providing bilingual/multilingual resources for the LGBTQ community and creating a safe environment and homeless shelter for LGBTQ [email protected], especially those who are undocumented. Familia is committed to the liberation—from police brutality, border control, micro-aggressions, etc.—of every LGBTQ [email protected] and to a radically collective revolution to empower and free their culture, art, history and families from oppression.

Co-founder Ella Mendoza was inspired by the “amazing warriors and undocumented women who stand together against injustice,” she says. “What started this [in Utah] for me was finding out I wasn’t alone. I went to New Mexico and had a conference with other queer [email protected]” There, Ella realized a major problem in the US is the lack of color in LGBTQ leadership. Part of Familia’s goal is to bring marginalized groups back into the picture. “[Members of these groups] have their work stolen, invalidated, mocked and brushed off,” she says. “We have had some of our best organizers feel burnt out because they are so silenced. … We do not have the capacity to grow when our culture, our art, our words are constantly invalidated. This is what we want to change.”

Mendoza shares heartbreaking stories concerning the lives of undocumented queer [email protected] in the U.S. If an undocumented trans or queer person is put into prison, they are more likely to be misgendered and/or raped (statistically, by the guards, not the inmates), and once deported, they “might not even be taken back to [their nation of origin],” says Mendoza. “My friends bring donated clothes to the people who live in [the areas where the U.S. drops them off]. People may never see their families again. Mothers are taken from their children and their children are put into foster care.”

There is a major risk for deportation and police brutality for members of organizations like Utah’s Familia. Mendoza says, “Every rally is not just an act of defiance but a revolutionary act of resistance. The reality is, we are fighting for our freedom. To be undocumented and queer in this country is to be in danger.” Regardless of the danger, Mendoza and the Familia group refuse to stay silent. She says, “When no one was talking about trans deaths, we had a vigil. When no one talked about the suicides and murders of trans women, we had a rally. We hold these events because this is our community. We need to have these things.”

Though Utah’s Familia started with very few people, it has been growing steadily and gaining more and more supporters. “At eight months old, Familia has been able to get people to listen—it’s very exciting,” Mendoza says. Recently, Familia and a sister organization, Stand for Queer Lives, held a rally and march in the name of trans women who have been murdered or have committed suicide this last year. Utah Pride Center lent their support, bringing equipment and water for the rally speakers. “We just have to keep making our voices heard,” says Mendoza. “I personally will not stop screaming until I see a person of color in leadership in every single LGBT organization.”

When asked what Familia’s plans were for Utah, Mendoza replies, “Education—we have to educate. We need to make a realistic database for [email protected] to have resources within the queer community and the undocumented community—classes and workshops about privilege, marginalized groups, queerness and trans-ness.”

There are so many ways to help this organization win the fight for freedom, including attending their rallies and meetings, which are often held at Mestizo Coffeehouse. The next fundraiser—on Oct. 17 at Boing! Anarchist Collective—is called “Joteria de la Lotería,” which means “gayness of lotería.” This fundraiser will have food, music and the fun game of lotería. “There is also talk of a Donald Trump piñata at the event,” says Mendoza. All the money that is raised will go toward helping Familia plan future events. “Up until now, every single rally, protest, workshop and event we have planned has come out of our own pockets,” Mendoza says. “We will be happy with whatever we get.”

Overall, Familia wants to get to know more people in the Utah community and help its queer, [email protected] needs. “We are raising money specifically for future events as undocumented ruckus warriors—we are loud and always creating noise!” For more information on Utah’s Familia group and to keep up with events and future plans, check out facebook.com/Familiatqlm.