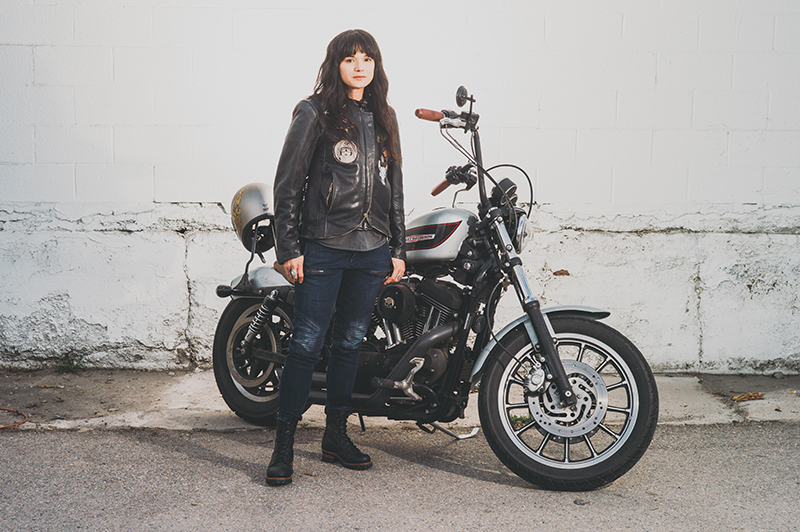 One wouldn’t expect a blog that highlights women motorcycle riders to be called The Flying Frenchman, but this is something that founder Michelle Boucher is completely comfortable with. Her site, ffmotolife.com, is so named after her grandfather, Butch Boucher, who raced jalopies and was given the nickname by his peers. She says that his example of living without fear lends well to her mission, which is to represent women riders in a positive and empowering way. She created her blog a little over a year ago as an avenue to highlight the fact that—contrary to what old-school motorcycle magazines tell us with their endless photos of scantily clad women hanging off of gleaming bikes—women like to ride motorcycles. “I just kind of got tired of women being portrayed that way,” says Boucher, “because there are women like me who actually ride—and I don’t ride in a bikini, and I don’t ride in high heels.” Boucher acknowledges that some people enjoy those types of photos, and she doesn’t seek to change anyone else’s behavior. She wants to promote the fact that women can ride motorcycles and that there are more today than ever before. “The women’s motorcycle market is the fastest-growing demographic within the motorcycle community, and I just felt like there needed to be something to support women,” says Boucher. Her frustration eventually turned to action, and she decided to create FFMoto. She had seen other women riders like her on social media—some outside of Salt Lake City—and decided to reach out to them. “I just started to focus on contacting women via Instagram and collecting their stories, finding women artists that are within the community—whether they paint tanks or they do leather craft—or even men that portray women that ride in a positive light,” she says.

With an influx of new riders, motorcycle culture has undergone many changes in the past few years. Boucher acknowledges that some people are hesitant to accept new female riders. “There’s been quite a bit of hate or degradation towards women that ride,” says Boucher. “Men usually never really have to deal with that. They say things like either we’re not smart enough or not strong enough to handle a motorcycle—or it’s just a trend.” The reality is that there are likely more women riders than in the past. Boucher is not the only woman seeking to encourage women who own and ride motorcycles. Local motorcycle collective The Litas was founded in Salt Lake City and has since spread worldwide with groups in 12 countries and 55 cities. One of Boucher’s personal contributions to the movement is dedicating a section of her website to showcasing individual women riders and highlighting the many diverse stories and backgrounds of women motorcyclists in Utah and beyond. For instance, Boucher featured local rider Felicia Baca. Readers might have seen Baca playing bass for local band Color Animal, but might be unaware that she rides a black Bonneville and has been riding for 12 years. Also featured was local Riley Ridd, who rode countless miles through the Baja California Peninsula and can be seen riding locally on her Enduro adventure bike.

In addition to running her website, Boucher works as a wardrobe stylist in the fashion and movie industries. Her studio is filled with fascinating handmade outfits and costumes, including medieval knight’s armor and what looks like something that Edward Scissorhand’s girlfriend might wear on a night out. “I’ve been doing styling and custom design for about 12 years, and I still do it on occasion—I’m just really choosy with what I do,” says Boucher. She started FFMoto with the intention of designing riding apparel especially for women, though she has put that on the backburner for the time being—more than one to-be-continued, motorcycle-inspired piece, however, can be espied on mannequins in her studio, which is located near Publik Coffee Roasters. Boucher first started riding after traveling in 2007 with her husband, Andrew Carruthers, to the Sturgis Motorcycle Rally in South Dakota, a large annual gathering of motorcyclists with an average attendee count of over 500,000 people. “We were cruising through the middle of nowhere in Wyoming, and Andrew leaned forward to stretch his back,” says Boucher. “The wind just hit me in the chest, and I smiled. I was screaming in my helmet, ‘This is what you get to feel?!’ Being in Sturgis, you’re surrounded by bikes everywhere—[with] men and women [riders]. That was when I was like, ‘OK, next year, by April, I will have a motorcycle.’”

Boucher recommends that women who are interested in riding explore safety and education courses available through Harley-Davidson, as well as the Motorcycle Safety Foundation (MSF). She is a staunch believer in wearing a full-face helmet and gear, which, she declares, allows for more time to enjoy motorcycles. “A lot of motorcycling is freedom,” says Boucher. “A lot of it is because [riders] can. Some of it’s for a cause. Some of it’s finding strength because they just came out of turmoil and this was a way to kind of add strength to their lives. It’s all very different, but the common thread is the motorcycle—it’s the two wheels that are binding us all together and connecting us.”