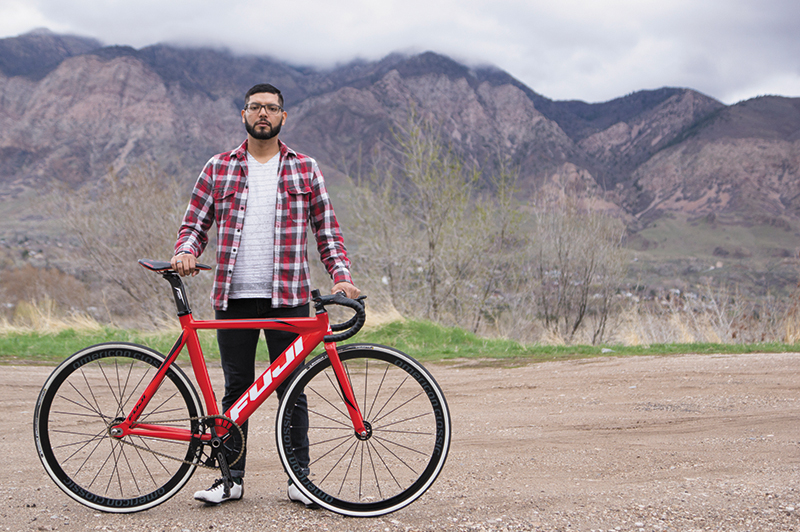 Fixin’ Up the Utah Criterium

We’re getting back into that time of year. Utahns have started to swap out their automobiles for two wheels and open air—it’s bike season! While there are those of us who do this as a hobby or to shed some pounds, some of us have already been mapping out their LOTOJAs, alleycats and criterium (crit) races for months in the making. Looking closer at Utah cycle competitions, the race with the most buzz is easily the fixed-gear crit.

Going back 25 years or so, crit races are nothing new for Utah. Throwing a fixed-gear into the mix, however, is still in its early years. To boil down a traditional crit to its basics, think GT racing on a road bike. Competitors are given a course of varying difficulty with swerving corners, hairpin turns and hills. Starting off as a pack, racers fight for the best time for a number of laps, which takes home gold at the end of the day. This sounds relatively nonthreatening in concept. Now take away the rider’s brakes, and you get a fixie crit.

Bringing the fixed-gear crit to Utah was the brainchild of Javier Campos and of Jeff Hepworth of Loyal Cycle Co. in Farmington. Campos, having already competed in traditional criterium races throughout the years, was inspired by fixed-gear crits like the Brooklyn Red Hook and San Francisco’s Mission Crit. Having hosted their first race last summer at the Farmington Festival Days, Campos and Hepworth are gearing up to bring two more events this summer. Farmington’s Festival Days race, making its second annual appearance on July 12 at the Legacy Event Center, has them excited. “It’s really nice having the city involved because they take care of a lot,” says Hepworth. City involvement for any event is always a benefit, seeing as how it covers almost everything from course construction, insurance costs, food vendors and more. The second event of 2018, happening in late August or in October, is still very much in the planning phase. This is no surprise, especially when these homegrown events take more time, money and energy than a city-run festival. The big issue right now is finding a location that works for staging such a technical event.

Campos notes that this will either be in the streets of Salt Lake City or, once again, at the Legacy Event Center in Farmington.

Having the course already mapped out for Festival Days at the Legacy parking lot “is also nice,” Hepworth says. Fixed-gear races are tricky to create and design because they have the potential to be more dangerous. “First-year racing is always the hardest to ride—hosting lots of riders without the developed skill set. For bike messengers, dodging cars is one thing, but hitting hairpins correctly—especially when you’re in a pack—definitely takes some skill,” says Campos. For this reason alone, many fixed-gear crits are held on weekends in empty business parks and large parking lots like Legacy’s. The course is able to be designed a little wider while also minimizing the risk to spectators or property. For Festival Days being a larger community event, safety is key. With that in mind, the course will be flat and relatively easy to get the hang of. Riders are also welcome to show up early and take some test laps. “We get a lot of first-year crit racers, and this is an all-ages event,” says Hepworth. There is also talk of adding a women’s division after seeing lots of interest in fixie crit racing at events like Salt Lake City Bike Collective’s Women, Trans, Femme (WTF) Night (hosted every Wednesday from 5:30 to 8 p.m.).

With so much community interest in fixie crits, the next question is how to train for a new kind of race style. For Campos, the key is muscle memory. With a traditional course being about one kilometer long and a race potentially lasting for 20 laps (around 45 minutes), high-interval training is important. This means being able to slow down enough to go around sharp corners and sprint out of them quickly. For those trying to win, the results often come down to which of the final riders can sprint to the finish line the fastest.

While this sort of competition sounds intimidating, Campos and Hepworth make it clear that these events are all in good spirit and that everyone is welcome. The first fixed-gear crit race of the year will once again be at Farmington Festival Days on July 12 between 5:30 and 7 p.m. Registration is $15, and everyone is encouraged to come early, ride the course beforehand, try some food trucks and see friends. To keep up with the second event this fall, updates and anything to do with bikes, check out @loyalcycleco on Instagram to stay in the loop.