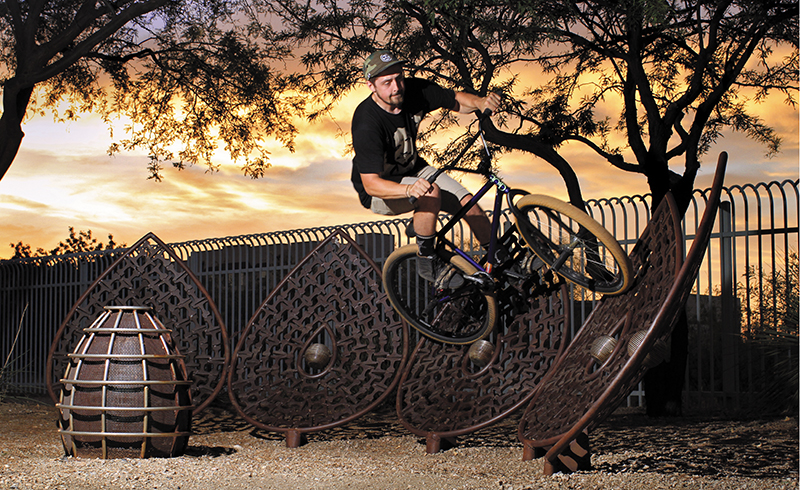 FOAD: The Good Times Are Killing Me

It’s safe to say that Salt Lake is a bike-friendly city. Along the ranks of places such as Portland, Seattle or New York, Salt Lake is quickly becoming a mecca for diehard bicyclists to bond over their love for the hobby. Among those diehards, you’ll find FOAD, a locally based group of freestylers who share the common passion for pulling major moves on fixed-gear bikes in both urban and natural environments. Within this tight-knit group of friends, you’ll find Jackson Bradshaw, the creative who combined his love for the sport and his love for film production to produce videos of FOAD group riding. Now, the group is set to release their second full-length film, The Good Times Are Killing Me, and have travelled the world in order to do so.

Over the years, FOAD has met up “pretty religiously,” according to Bradshaw—every Sunday, they ride and film. Since we last caught up with the group in 2013, they’ve created countless videos and have collaborated with other cyclists within the sport. “[Can’t Fool The Youth] was our biggest project, and we released it online,” Bradshaw says. “We’re doing [The Good Times Are Killing Me] for free online [as well] because you can’t make money anyway, so it’s better for people to watch it.” Bradshaw would rather have the group’s stories reach a larger audience than make money off of their hobby.

Aside from having some great footage of the guys riding, Bradshaw hints that there’s going to be more to the film than just action.  As we discuss this, Parker Thompson—another member of FOAD—pulls up in his fixed-gear bike and introduces himself. As he goes to lock his bike, Bradshaw tells me that Thompson was in a nasty bike accident that nearly killed him last spring and that his journey to recovery and getting back into biking would be included in the film. “This is his first week back on the bike,” Bradshaw comments as Thompson comes to sit down. Hearing us discussing his leg injury, Thompson adds,  “I was in a coma, so they couldn’t do surgery on it—they just had to filet it open to let it drain,” says Thompson as he lifts his pant leg to reveal a massive scar. He was hit by a car while riding home from work, but the trauma hasn’t seemed to alter his passion for riding bikes. In fact, he seems excited to finally be able to ride again.

In addition to the bigger focus that the group put on documenting stories for The Good Times Are Killing Me, Bradshaw talks about the trips that the FOAD has made specifically for filming. “We’ve been riding a lot of dirt and mountain stuff because that’s not what everyone is doing,” says Bradshaw. “We went to Phoenix last month and New Mexico and Barcelona. We’ve been trying to get out of Salt Lake for filming.” Though fixed-gear is a small niche in the bike community around the world, Bradshaw says that they’ve been able to connect with fellow riders in other cities to film for The Good Times Are Killing Me. “We chose Barcelona because, in terms of action sports, it’s kind of known for having crazy street spots,” he says. “I don’t know what they did to build that city, but [it’s perfect].”

The group met up with fellow bikers from Portugal for the filming they did in Barcelona, and have focused on building up their network throughout this film. “We’ve gotten a lot of people involved who want to be a part of it, and I think that’s really cool,” says Bradshaw. “I think [that we’ll be] telling a good story, too, more than just the actual cool shit that’s going down. It’s about the riding, but it’s also about all of us, too.” In terms of how The Good Times Are Killing Me will differ from other fixed-gear films, Bradshaw says that we can expect a lot more tricks from FOAD than we would see in other bike movies, such as MASH.  However, he thinks that this will be their last feature film. “We’re all getting old, and it takes a lot—for me personally—it takes a lot out of me,” says Bradshaw. “It’s a lot of work and is a big thing to conquer. I also tell myself it’s going to be the last, so I do it really well,” he mentions before saying that the group still has more filming to do before its release in September.

In their current videos, I see plenty of footage on mountains or in nature and have to wonder how easily that environment induces tricks on bikes. “The most conducive spots, in terms of street-trick riding, is finding something that’s weird and different,” says Bradshaw. The Good Times Are Killing Me is set to be released this September and will be FOAD’s final film, but you’ll still see them around town together. The film is set to be released online for free, but Bradshaw wants to create physical copies that will be available for purchase on their website, foadfixed.com, along with their other merchandise (which is really sick, by the way). “We’ll always be friends, and we’ll always ride bikes,” Bradshaw says before we depart, making it clear to me that the bike scene in Salt Lake is about more than just transportation—it’s about creating lasting friendships over shared passions.