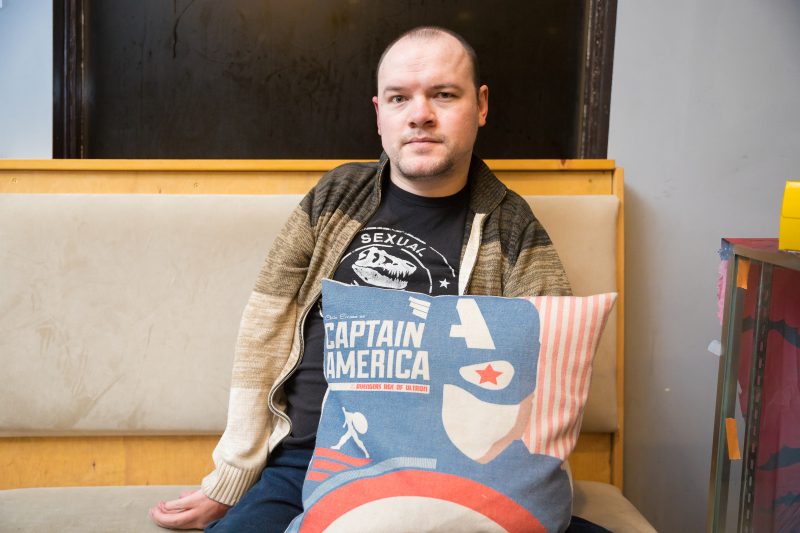 In the not so long ago, the Press Agents’ Association (New York Friar’s Club) created a tradition. This collection of actors, musicians and comedians would honor one of its members at a gathering each year. Every member would have the opportunity to approach said individual and spew a series of comments less creative and witty than Youtube feeds, all the while presenting commonly acknowledged flaws and being more mean than funny. Sorry, wait—that’s modern cable TV. In the not so long ago, it was generally upbeat.

I know what you’re thinking. You’re thinking, “I don’t have enough friends to ever be roasted,” or “Is there a place where pure roasting still exists?” Well, that’s the beauty of what I’m about to say. Brewvies in Salt Lake City is having such a roast. A Front Row Film Roast, where a roastee is a actually a plethora of images to scorn and make fun of—a movie. Some of the best of our local comedians—Front Row founder Trevor D. Kelley, Andrea Kelley, Andrew Sproge and Jessica Sproge—have gathered for you, so you don’t have to have friends or anything. Just show up, sit down, snack, high-five, whatever and prepare for film-roasting amazingness.

The first film on the docket is none other than Twilight. This is super for so many reasons. So many reasons, SLUG had to sit down with local funny man Trevor D. Kelley to sort it all out.

SLUG: OK, so everyone’s thinking Mystery Science Theater with this. What does this Front Row Film Roast offer (other than comedians replacing robots voiced by comedians) to separate itself from movie roasts that have come before it?
Trevor D. Kelley: Great question. First, there’s the live aspect. You’ll actually be in the theater, doing the whole movie experience, and be in the same room as the comedians, with beer and snacks at the ready. Another point of difference is MST3K’s M.O. was doing roasts of very obscure, sci-fi movies that didn’t seem to take themselves very seriously. We, on the other hand, plan on doing widely seen, greatly loved movies that are centers of pop culture and are to be taken more seriously than a no-name B film. We want the movie itself to have some pull. We want you to say to yourself, “Oooh, I haven’t seen that in forever. Let’s go!” 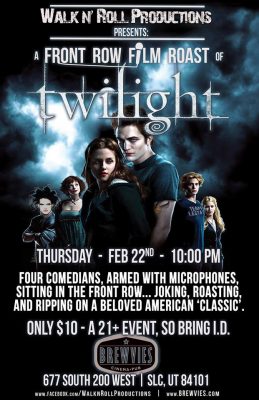 SLUG: Where did the idea for a local movie roast come from?
TK: My good friend and business partner Spencer Walker had the idea out of the blue about three or four weeks ago. He called me and asked if I thought it was a good idea and whether I would be interested in getting it off the ground, and Walk N’ Roll Productions was formed. We approached Brewvies, and their support was overwhelming. You know it’s a good idea when you hear it and ask yourself, “Why didn’t I think of that?”

SLUG: Does the decision of choosing Twilight reflect an idea to roast more recent films, or was it just easy-pickings? How do you go about choosing the movie?
TK: Initially, we ran a little survey and took suggestions from people who said they’d be interested in an event like this. We picked Twilight because it matched all of our target marks: big movie, very popular (to love or hate) and it takes itself pretty seriously. Obviously, Twilight being easy to make fun of had a little to do with it too.

SLUG: So what other films will be featured?
TK: We haven’t chosen the next film to be roasted, as we have been putting all our focus on the first show. We had planned at the end to have our audience give suggestions for what they’d like to see in the future, so we’ll be looking at those responses as well. As long as it’s a big movie that isn’t already a comedy that people want to see, we’re open to anything.

SLUG: What will the format of the roast be? Is the crowd allowed to participate in the roast?
TK: We’ll be in a spot near the front where the audience will hopefully be able to see us pretty well. The comedians will be doing most of the joke telling, so as to keep things from getting too chaotic, but there will definitely be audience participation with drinking games and the like. We want it to be like when you watch a movie with your funniest friends at home, but in a theater setting.

SLUG: How did you select the comedians who will be roasting Twilight? What local favorites (comedians) can we expect to see over the course of future roasts—any national guests?
TK: Each of the comedians on the first show are people I have personally worked with in the Utah comedy scene, either via improv, sketch, Youtube and stand-up. I will personally go to bat for their abilities because I trust them implicitly. They were also chosen based on variety of experience, sense of humor and how well I know I work with each of them. For future shows, we will retain a core of people (I will be on every show, for example) and invite local comedians to join us. We have had a lot of people express interest in being on the show, so we hope that as it grows, so will the guest list. Fingers crossed we get big enough to invite big time names later down the road.

SLUG: Will attire play into these events, i.e., are audience and/or comedians encouraged to dress in relation to the theme of the movie?
TK: Not at first, but I could see something like this for a Halloween special or some such down the line.

SLUG: Do you have any movies you are passionate about roasting? Which?
TK: There are these old Mormon cartoon films called Living Scriptures. Roasting one of those would be the ultimate for this, but licensing gets tricky.

SLUG: How much practice have you had with roasting film? What do you feel makes something a good roast? And more specifically, what makes for a good film roast?
TK: I’ve been doing this for free ever since I can remember with family and friends. Film is a passion all of the comedians share, and we all have different looks on the subject. We all got together and watched the movie last week (for me, it was my first time seeing the movie) and made some notes about what sort of recurring jokes we could make, throwbacks and, of course, what would make for a good drinking game. We’ll watch it again and really nail down finer details, sharpen everything up as much as possible, and by the 22nd, we’ll be ready.

SLUG: Can the audience throw popcorn during especially terrible parts of the films?
TK: I’m sure Brewvies would appreciate if we didn’t. We want to keep getting invited back. If it’s so bad you can’t help yourself, though, there’s not much we can do, is there?

SLUG: If this event had a tagline, what would it be?
TK: Front Row Film Roast: Finding Friends You Never Wished You Had.

SLUG: Is there anything you’d like to add for the potential Utah attendees?
TK: The support and overall excitedness surrounding this event has been incredible. Thank you for supporting local comedy, and with your help, this’ll only get better.

There you have it. On Feb. 22, for an admission of $10 at the Brewvies Cinema Pub (21-plus only), you will witness … glorious … live … roasting. Which just happens to go really well with beer. (Sound of mic dropping.)