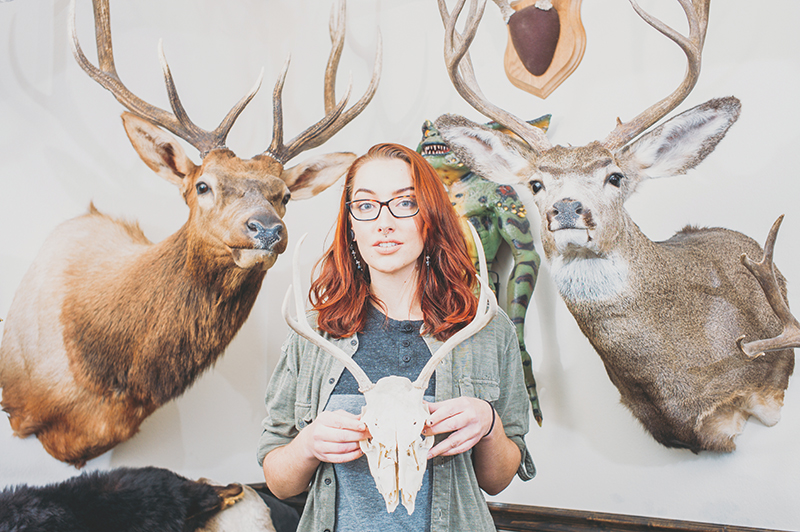 Americans can’t seem to make up their minds about death. On the one hand, gory movies make a killing at the box office, and on the other, it’s something that people hate to talk about. Andy Silva of Remnant Preservations hopes to open people up to the idea that through the skilled art of taxidermy, the insight and love we experience with animals doesn’t have to end when they are no longer living.

”Our society doesn’t like death—dealing with it or talking about it,” says Silva. “After things die, we just kind of move on to the next thing. We do a lot of pets [at Remnant Preservations], first of all, which is a very intimate thing—preserving this family member essentially—that has passed. People mourn in their own way. It isn’t required to want your pet preserved after its passing to recognize that someone would find purpose from such a memorialization.” According to Silva, who is also a SLUG writer, her path to becoming a taxidermist ”started out of naiveté.” Four years ago, she started collecting bones and wanted to learn about osteology and skeletal re-articulations. She contacted a taxidermist to learn how to perform bone reconstruction, but then found out that taxidermists don’t do that. She then began a two-year long internship with skilled taxidermist Chad Evans, who taught her everything there is to know about the craft. ”I spent a chunk of my time in retail management and then, one day, just quit and decided I was never going to go back to a 9-to-5 or retail or management job ever again,” says Silva. ”I wanted to only do work that lets me have more control and artistic expression.”

There is a significant element of artistry in reproducing the look of an animal. Taxidermists use sculpting, painting and sewing skills during the preservation process. Silva didn’t plan on going into taxidermy, though she has always been interested in the arts. ”I did a lot of mixed-media sculptures and paintings—the more tactile arts were always what I was gravitating towards,” says Silva. ”I liked working with clay a lot and just building sculptures. It’s great because that obviously ties into taxidermy when you’re working on this palpable thing.” Silva once went into a crafts store and told the worker that she was painting a fish. The worker asked what type of canvas it was, and she had to reiterate that she was, in fact, painting an actual fish.

There are many misconceptions about the process of taxidermy. ”We don’t stuff [animals]—everyone thinks that I just sit and stuff with cotton,” says Silva. The reality is that it is a very complex process which depends on the size of the animal. Smaller animals are freeze-dried and their musculature is maintained, whereas larger animals are composed of foam models with their hide or ”capes” draped, shaped and formed around them. Silva asks owners for pictures of a pet playing, sleeping and living so that she can accurately reproduce the pet’s essence. Pets will often be posed in a sleeping position, and Silva wants to make sure that the pose is correct.

Silva recognizes that many people aren’t quite sure what to think of taxidermy. ”I think that a lot of people think that taxidermy is centered on glorifying a hunt, or that very masculine/macho ‘I shot this thing and killed it’ [outlook],” she says. “They think that, for hunters, bringing stuff in is this very egotistical thing,” says Silva. ”The reality is that every hunter I have worked with for these pieces has been very compassionate,  and [taxidermy] has been more about appreciation for the life than a victory over the death.” Silva says that the art of taxidermy goes far beyond shoulder mounts of hunted animals, though she acknowledges that this is the primary public perception of the craft. On the day SLUG spoke with her, she was preserving a chihuahua. Although many people have no desire to preserve a pet in this way, it brings comfort and peace to many who do.

Silva was quick to point out the educational nature of taxidermy. She says that it allows people to get up close to animals for purposes of learning and study, as well as appreciation in a safe environment. She pointed out that many animals in museums died of natural causes, but because of the art of taxidermy,  they have been preserved. She believes that people appreciating animals assists in the advocation of wildlife preservation. ”There are animals now that are extinct, but we have taxidermy pieces that people can come and see and be like, ‘Hey, look at what happened,’” says Silva. ”They are educational devices to show how we can adjust our ways and look at how we are managing ourselves and our environment and the impact that we are having.”

Silva can be contacted through her website at remnantpreservations.com.