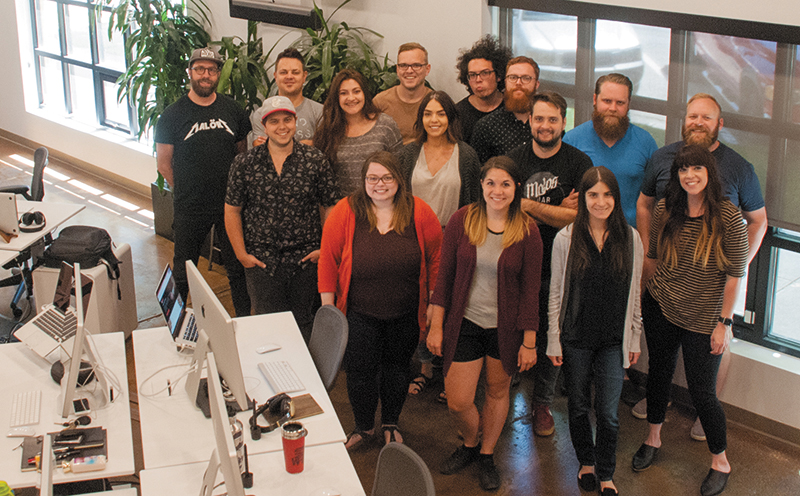 Belly of the Whale: Getting to Know Underbelly

Walking into Underbelly, it’s nearly impossible not to feel the relaxed atmosphere that fills the space. With a foosball table in the back, local cold brew in the kitchen and occasionally a beer on tap made by members of the Underbelly team, one could say that working for Underbelly sounds like a dream. But despite the chill vibes surrounding their space, Underbelly get shit done in the design world, and they’re definitely a company to keep in mind for your future design needs. Autumn Mariano (Senior Designer), Matt “Scrib” Scribner (Brand Designer and Illustrator) and Ben Meszaros (Executive Director) dig into the details of this awesome company.

Underbelly started with owner Anthony Lagoon, who worked alone until, after having so many project requests, he decided to bring on Scrib. After staying in a small house for a couple years, Underbelly realized that they were going to need a much larger space to conduct business. About three years ago, Underbelly took over the corner of 400 West and Broadway, where they currently reside. They have worked with clients from all across the globe, and they even won the 2017 AIGA SLC 100 Show Copper Ingot for their Epicurrence design. “Eventually, [Lagoon] said, ‘I want to do my own thing,’” says Meszaros. “‘I want to have more control over what we do: the quality, who we work with, the problems we solve. I want to make a better long-term impact on the things that I care about’—which is sort of how we all ended up here.”

Underbelly’s duties include designing apps (including Tracy Aviary’s app), product branding, illustration and web development—anything you put your mind to that requires design skills, this is your go-to team. The largest pullers of their business, however, are videography and photography. “Most of the work we do is considered product design,” says Meszaros. “We have very talented illustrators, brand thinkers and videographers.” For instance, Underbelly uses the Red Dragon—the same type of camera that The Lord of the Rings was filmed on. Their videography typically comprises videos that explain new products that are coming out. Having designed everything from websites for regional companies like Epicurrence to video product designs for Honeycomb Bakery to assisting Facebook Canvas, Underbelly’s capabilities are endless. Their most recent endeavor: incorporating virtual reality into their list of design capabilities.

One thing that separates Underbelly from other design teams is their dedication to client relationships. Rather than leaving the grid and coming back with a finished product, Underbelly works with their clients from start to finish. “We really like to be a part of the team that we’re working with and involve them in the process from the beginning,” says Mariano. “We make decisions together.” One example is their relationship with Facebook, which requires Underbelly to stay in contact with their clients and be ready to continually update their apps and optimize their user-friendly interface. Because of this mentality, Underbelly receive most of their work from word of mouth. “We depend on getting good work by doing good work and having people tell others that we did well and took care of them,” Meszaros says. To ensure their work is solid, Underbelly believes in researching and testing their products, making sure their designs resonate well with their clients and are both user-friendly and aesthetically pleasing.

Underbelly has been substantially growing, reaching an increase of 40 percent over the last two years in terms of company size, revenue and work space. “I think we harbor a good attitude of learning here,” says Mariano. “You can take someone who, as long as they have a desire to get better, can learn quickly and do just that.” Their team structure is grounded in personal responsibility, transparency and trust. “We work in an open environment,” says Mariano, “but everyone is responsible for their own shit. We’ve assembled such a good team that it’s easy to work hard for the people that work here.” Scrib is proud of the family culture of Underbelly. “We spend time with each other a lot outside of work,” he says. “We’re good friends, and that’s what actually helps us get our work done. We know each other’s strengths and weaknesses, so we can have that humility with one another.” In other words, Underbelly is the wildly supportive and talented family that we’ve always wanted. Meszaros says, “I’ve always been under the ideal that if you hire the right people and trust them, they’ll surprise you every time.”

Scrib and Mariano’s largest successes at the company span from a creatively designed deck of cards to developing quickly as an intern to working with Facebook. For Meszaros, the biggest success is Underbelly itself. “Lately, I’ve been thinking a lot about what we want to be known for,” he says, “and how I can help build a company where people can come and work on things that they’re passionate about to reach their full potential as a designer and developer.” The basis of what Underbelly is and stands for could easily be summed up in these three words by Scrib: “Approachable, laid-back and optimistic.”

Visit underbelly.is to find Underbelly’s work, or head to their Instagram (@underbelly) for updates on their latest news, hiring opportunities and more.