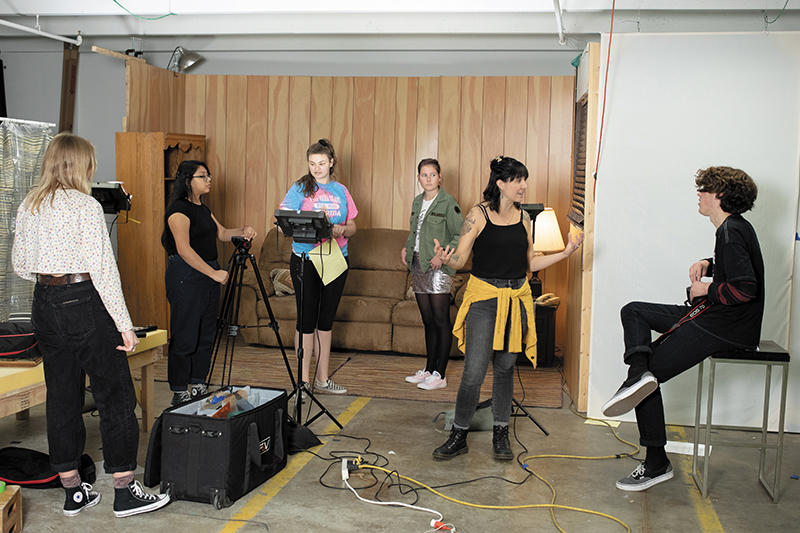 Salt Lake City’s Spy Hop is a nonprofit organization based around after school programs that promote high school students finding their voices. Whether it’s through video game design, music/audio or film, there’s something available for every student. Film Mentors Paige Sparks and José Manzo orchestrate the filmmaking program, PitchNic, which consists of many different levels and avenues students can pick from to form their own learning experience.

Spy Hop has been an organization for 20 years, and PitchNic and the entire film program have existed for around 15. “I think when PitchNic took off that really solidified Spy Hop in the community, and it’s grown from there,” Sparks says. The film program is (typically) aligned into a tier system, starting with media labs, which are beginner, three-week courses that can range from intro to camera to lighting workshops. “Students that want to take the next step will then be encouraged to apply for the apprenticeship program,” Sparks says. Within the film department’s apprenticeship program, 10–12 students will advance into a paid internship where they work with clients within the community, and they will have the opportunity to learn anything from building websites, establishing an LLC, the details of client communications and other subjects that can catapult them into becoming a freelance filmmaker.

The next move is the PitchNic program, which includes an application process to get in. Since it’s an advanced program, the instructors select 10–12 students to carry on within it. In PitchNic, the students are invited to use camera gear provided by Spy Hop, and they’re encouraged to find their own voices and communicate through visual storytelling. It’s a year-long program that requires them to go through the entire filmmaking process—from writing a script and storyboarding to shooting their films, to the editing process.

Sparks believes in having her students pick their own passions and pursue them completely. Each student gets to find their niche within the filmmaking process and excel in it. In her own education, she was taught to wear every hat on set because that is what would traditionally be expected on the job. While she’s grateful for that perspective, she teaches the opposite. “Even if you can do all of it, find the thing that you want to do and latch onto that,” she says. “That’s the cool thing about Spy Hop. Yeah, we’re showing them how to make films, but we’re also showing them how to meet and work with people that have the same passions that they do.” Sparks hopes that by teaching this way, students will learn to be comfortable finding their place on a team and learn how be excited about their work.

At the beginning of the program, students will come up with their stories, whether it’s a narrative or a documentary. Once they develop their pitch, they present it to a panel of judges. Later in the year, the students will pitch their story ideas to a larger audience at their annual benefit event. Ten to 12 stories will eventually be narrowed down to four, and each student will have the opportunity to pick which film they’d like to work on. The Film Mentors teach them budget-writing, script-writing and pitching, among a handful of other intensive skills to get them where they need to be for shooting. The students have access to a closet full of equipment and props, and they go through the process of hiring their own actors. “It’s like a capstone program, which is why we’re very selective,” Sparks says. “They have to have at least some form of a background in filmmaking, and it’s takes a certain level of commitment.”

“They get really excited about their projects, and we’re here to assist them in their processes,” Manzo says. “We know that in the end, their premiere event will be a big deal for them.” The PitchNic premiere is a big, red-carpet style event at the end of the program where students get to dress up and present their finished films to an audience. “We have them sit in the last two rows and watch their films with the audience,” Sparks says. “It’s fun to see them experience something that I never got to experience in high school.” Herein, the advisors witness their students finalize what makes it all worthwhile. “We required our 2018 students to attend the last premiere helping out,” Manzo says, “but it’s mostly so they can get excited about it.”

At the PitchNic premiere event this past November, I had the opportunity to see these students’ films for myself. One that stood out the most for me was a narrative titled Me and Michael, an experimental film full of colorful visual effects and lighting. The intense film focuses on a teenage boy dealing with the stress of living at home and witnessing his parents’ abusive relationship. Watching these films, my mind was blown that high-school students made such polished pieces of work. These students cultivate a palpable passion for and skill in filmmaking.

Spy Hop is a nonprofit organization, and all of their programs are made to be accessible to all students. “If there is a class that requires tuition, it’s a sliding scale,” Sparks says. “We never want anybody to feel like they can’t afford our programming.” With the mission to give students a voice, Spy Hop works toward offering students ages 13–19 a platform to be creative, speak their truth and, ultimately, get a headstart on their filmmaking careers.