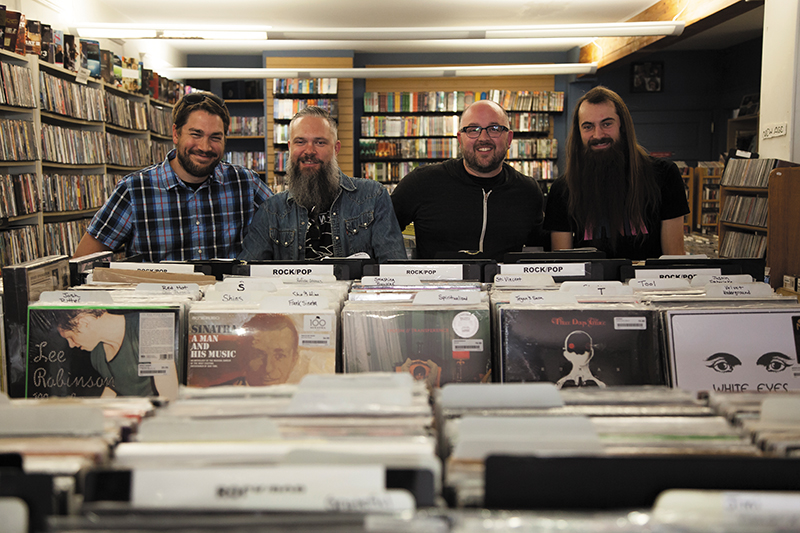 Music is a fickle mistress, but Graywhale Entertainment has managed to keep her coming back for more since 1986. They’ve been a major provider of music and media to cities all around Utah, and their employees contribute to the scene in both their personal and professional lives. As the “big fish in a small pond,” Graywhale has had an enormous impact on Utah’s culture, as well as on the national music industry, in their 30 years of business.

That longevity is impossible without passion, and Graywhale’s employees have that in spades. University Store Manager Kyle England has worked in record stores for almost 20 years, and his view on growing up in the industry reflects what’s best about the scene. “I was so obsessed with every genre of music. … I worked at a record store when I was 17 so I could afford it,” says England. “As I get older, the owning of the music is not as important as is sharing it with everybody else. I see myself in younger people that come in and are really passionate about other genres that I was passionate about 10–15 years ago, and it rekindles your passion.”

The willingness and intelligence to adapt-—qualities engrained by the founder—also undoubtedly kept Graywhale thriving in an ever-changing and harsh industry. Originally located on 3300 S. and 2300 E., Graywhale began as an ambitious attempt by Steve Gray to bring the burgeoning CD market to Salt Lake City. But like most new tech in its early stages, the medium was unaffordable for most consumers. When customers weren’t banging down the door to buy CDs for $30 a pop, Gray decided to change up his model: He relocated and started bringing his own used CDs from home to sell at the store for $15. Gray inadvertently invented the business of buying used CDs, and Graywhale would later become the first in the nation to establish the buy/sell/trade model. As a member of the Department of Record Stores, Graywhale helped bring Record Store Day to life and has reaped the rewards of the ensuing vinyl resurgence.

Through its adaptability, Graywhale was able to open stores in more locations across Utah and expand its product line to movies, video games, vinyl and collectable merchandise. CD sales sustained the business until about a decade ago, when the record shop industry had a mini-apocalypse and lost 400–500 stores a year across the nation. Graywhale’s ability to try out new merch ideas—and toss them if they didn’t work—gave them an edge over their competition and allowed them to move with the ever-changing needs of their customers.

Supporting the needs of the local community is at the core of Graywhale’s survival strategy. “I think [success] has a lot to do with being locally owned and operated and being beholden only to what we want to do in our community,” says General Director Dustin Hansen. “This place doesn’t work if it’s not for our customers. Graywhale has been forever locally owned and operated. There’s never been any ownership from out of state.” This care for the locals extends to other businesses too—Graywhale has been a sponsor of major events and institutions like the Twilight Concert Series, X96 Big Ass Show, SLUG, KRCL and more.

Selling music isn’t just a job for Graywhale employees—it’s a calling. The stores are populated with knowledgeable employees, many of whom are musicians and artists who strive to share their passion with others. “What’s really cool about all record stores, and definitely this one, is it does impact the culture, literally,” says Store Director Brandon Anderson. “Music is something connected to people’s hearts and spirits, and people experience music in a way that has a deep connection.”

For University Assistant Manager Jon Christiansen, the best parts of Graywhale come from community interaction—neither the store nor its employees would be as successful as they are if they were as inapproachable as a corporate monolith. “There’s so much new music, you can never know everything,” says Christiansen. “I learn from customers every single day. You get to teach people and people teach you. It’s a community effort for sure.”

Anderson agrees that the biggest reward from working for Graywhale for 10 years is being able to not only have a passion for his work, but to be able to pass on that passion to his customers, especially those who haven’t had access to music like he has. “Maybe they grew up in a real small town, and maybe they had limited exposure to the Internet, and they only know a certain little niche of music,” says Anderson. “It doesn’t mean they couldn’t become the craziest jazz hound and music critic of all time—they just haven’t had the experience yet. That’s the most rewarding thing—to help those people.”

Graywhale’s achievements over the past three decades have been monumental, and their future is poised to shine even brighter. Their newly revamped website, graywhaleslc.com, now allows customers to search the entire inventory online, and the Taylorsville location has added a book section to their buy/sell/trades, which, if successful, will spread to other locations. Join Graywhale this June for 30 days of celebration with different discounts and product giveaways every day of the month.