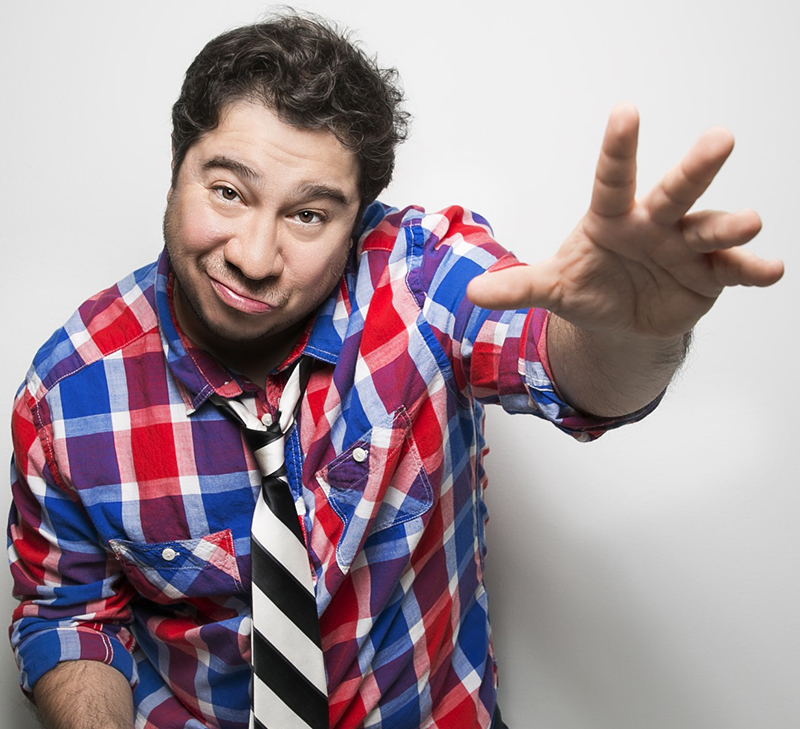 Straight out of L.A., for one weekend, Greg Wilson is bringing his Gonzo style of stand-up to Utah audiences at Sandy Station. You may recognize Wilson from dozens of appearances from TV on shows such as World’s Dumbest to Modern Family. He’s been all over the comedy circuit writing and appearing on multiple clip shows, and is starting a new televised game show debuting later this year. Before he left the comforts and sunshine of L.A. to come to bipolar February weather of Utah, SLUG got a chance to talk with Wilson to find out what his show and his Gonzo style is all about.

Greg Wilson is known for being off the cuff and really over the top in everything he does, be it his TV appearances or his stand-up shows. “It’s funny,” he says. “I never really knew how to describe my style until I saw a definition of the word Gonzo.” He says that although the word triggers people to conjure up a drug-fueled escapade with Hunter S. Thompson or The Muppets, it’s more than that. “With Gonzo, the definition is freewheeling to the point of outrageousness,” he says. “That’s how I approach comedy. I like it—I have lots of material, and I love doing material, but, I also love creating some kind of organic experience with the audience in that moment, and I love seeing how far I can take it—and it gets pretty wild.” Wilson typically blends multiple styles into his set, and anything goes. “I think the thing is with modern stand-up is that people feel like they ‘get it,’” he says. Wilson also says that audiences these days see so much comedy saturation on platforms like YouTube or TV channels like Comedy Central, and that because they can watch comedy from the comfort of their homes, they have a preconceived notion of what a comedy show is. “I think that it’s diminished the value of the live experience,” says Wilson. “They don’t realize how much different live comedy is from broadcast comedy. Watching it and being in it are two totally different things.” In fact, part of what he loves about live comedy is that each show is going to be different. “I go out of my way to make sure that everyone leaves there knowing that that live experience couldn’t have happened via YouTube,” he says. “That’s what I mean by Gonzo. I don’t know what’s going to happen. I just want something to happen.” At any given show, he can go off-script at any point, blending the normal well-rehearsed sets audiences may be used to with more of an improv-heavy live act, creating a one-of-a-kind experience that can’t be duplicated.

When Wilson isn’t performing or writing, he actually teaches courses on the art of stand-up. He prides himself on teaching the dynamics of both stage presence and writing jokes. “I believe that comedy is waves and particles,” he says. “It’s ordered and random at the same time. If you learn to do both, that’s when you really have something.” He runs individual workshops and teaches full courses on punchline dynamics, the basics—like going from joke to punchline to routine—as well as other skills, such as transforming storytelling into material. “I am the only one, I believe, that teaches crowd work and riffing,” Wilson says. “That’s where I teach them to get really improvisational onstage, to let go of those words and to see what happens, to express themselves freely and connect with the audience.” He even has a full class on handling hecklers, which, for any comedian regardless of skill level, can be a daunting experience.

Wilson can handle going off script, hecklers and multiple joke formats due to his impressive background in improv theater, starting out at the ripe old age of 17. “I have a huge improv background,” he says. “I started in 1989/90 with the Ad-Libs improv troupe in Dallas, Texas. I quickly became one of the stars of the show, and that’s all I wanted to do for a long time—and for nine years, that’s all I did. At the time, it was very popular—we were like the Second City of Dallas.” This type of stage training has rocketed some of the comedy greats to the top, and what’s impressive is that Wilson started out so young and kept his passion for nearly a decade before breaking out into more realms of entertainment. Speaking of his improv years, Wilson says, “That’s what really taught me that you don’t really know where the line is until you cross it. That’s what teaches you to push those boundaries. I’m always looking for the opportunity to do that.”

This is exactly what he means about “anything happening” at his shows, because he doesn’t even know yet what he’s going to do once he gets going. “I don’t know the line until I cross it,” he says. “To me, I’m not even thinking, ‘Are we close to the line? I’m just going and going and going and, 99 percent of the time, we never cross it. So long as you’re funny, you can get away with almost anything. People are always like, ‘I can’t believe no one’s ever killed you yet!’ and I’m like, ‘I can’t either!’” Pushing limits and boundaries doesn’t mean that Wilson plays his material “blue,” and his sets can cover topics from the political to the absurd to the controversial, to anything and everything. It really depends on where he is and what the audience is like. “Most shows wind up around 60/40: 60-percent material, 40-percent improv. Some nights, you have a 90/10 either way.” Wilson is the kind of comic that just runs with it and might get lost on a tangent or have a moment with a heckler that leads to something else. The audience is just as much a part of what he does as is the material he brings. “If you can make it funny, you can do anything,” he says.

Wilson himself is a fan of all styles and niches of comedy, from prop comedy to stand-up, observational to storytelling. “If you achieve the goal of being hilarious, I’m a fan of it,” Wilson says. He will be teaching a storytelling workshop at Sandy Station in addition to his shows. “Storytelling is one of the last bastions of originality,” he says. “Observation is covered by so many eyeballs. Storytelling allows you to communicate a very common theme in a unique and original way, because the things that happen to you don’t happen the same way to other people.” While it was recently looked down upon as a comedy form, storytelling in the style of comic greats like Carlin and Pryor is making a big comeback. As a writer, Wilson’s worked with all kinds of comedians over the years. Surprisingly, he has an almost somber theory as to what makes the best kinds of comedians. “I’ll tell you what makes a comedian,” he says: “abuse. Abuse is really the background that makes someone, and it’s the strange connective tissue in comedy.” In this sense, abuse is a term that can mean anything awful that has triggered a change in someone. “Abuse is some weird thing that gives you this total abandon to pursue the arts. That’s one of those things I feel that most truly dedicated comedians share,” he says. “Now, it isn’t as common as it used to be, because comedy has become kind of a mainstream thing to do. It isn’t considered the big gamble it used to be. It was just another career in the arts. Those people that had grown up with the abuse kind of had that fire.” He points out that with comedy becoming more mainstream, kids as young as 15 are hitting open mics, and they might not have the same background that others share. “There’s always that moment where you find out what it is. It will come out in the weirdest times and the weirdest places: ‘There it is—that’s the reason you’re so funny,’” he says. Wilson doesn’t necessarily think that a comedian’s jokes need to be about their pain or that they must twist something out of it to make it funny—“It’s just the spark that makes you funny,” he says. “I like one kind of comedian: the funny kind. I don’t care how you get there.”

Traveling the country, Wilson has toured anywhere from colleges to bars, but there’s one place that he feels the most at home. “I love working in the comedy clubs. It’s always been my bread and butter and where I’ve had the most fun. It’s the best suited for what I like to do. Everywhere else comes with rules, and I hate comedy with rules.” Up to this point, he’s never played a show in Utah.—though he did have a run-in with some college kids outside of the state once. “One time I met some kids that were so white, I asked, ‘Are you guys from Snowflake College?’ and they started laughing because they were actually from Snow College,” he says. His ideal crowd could be anyone, and the location or venue doesn’t predetermine anything, it turns out. “What you think would be an ideal crowd isn’t always the ideal crowd,” he says, musing about the time he did a High Times show, for an audience full of stoners, which, it turns out, are only a good audience for first 25–30 minutes. Then they fade out. “Stoners are not the best audience,” he says. “Audiences are snowflakes: There are just no two alike.” Oddly enough, the best audience he has ever had was a school fundraiser with parents and faculty, where they “went off the hook.”

Right now, all that Wilson can tell us about his first two Utah shows that he’s bringing this weekend is that “a hurricane is about to hit Salt Lake.” Everything is adding up to the perfect storm. Since he’s been so busy with other endeavors, Salt Lake is just a quick break in between projects. “Because I’ve been working in television, when I hit the stage, A LOT comes out,” he says. This weekend, each show will be a different and unique experience. “A lot of it depends on the audience, if you catch a wave, there’s no telling where it’s going to go.”

Wilson has currently been working on a new comedy game show called Funny You Should Ask, for which he both writes and appears in several episodes. He is bringing his storytelling class to Sandy Station on Saturday afternoon between shows, but space is limited. If you are interested in seeing what his comedy classes have to offer, though, his stand-up master class is available on a four-hour digital download on his website, and it’s rated the No. 1 best-reviewed standup workshop in the world. One of his recent students, Tamer Kattan, just won the world series of comedy.

Greg Wilson will be performing two upcoming shows in “The Vegas Room” at Sandy Station, Friday, Feb. 26, at 8:30 p.m. and Saturday, Feb. 27, at 8:30 p.m. The Storytelling Workshop has limited spots left for 12 p.m. Saturday, Feb. 27, at Sandy Station. The cost is $65 (which is normally $100 in advance). For more information, email teresa@theheandsheshow.com. Tickets for Greg Wilson are still available online for $10 at sandystation.ticketspice.com/the-greg-wilson or $15 at the door. You can check out more of Greg Wilson at thegregwilson.com.