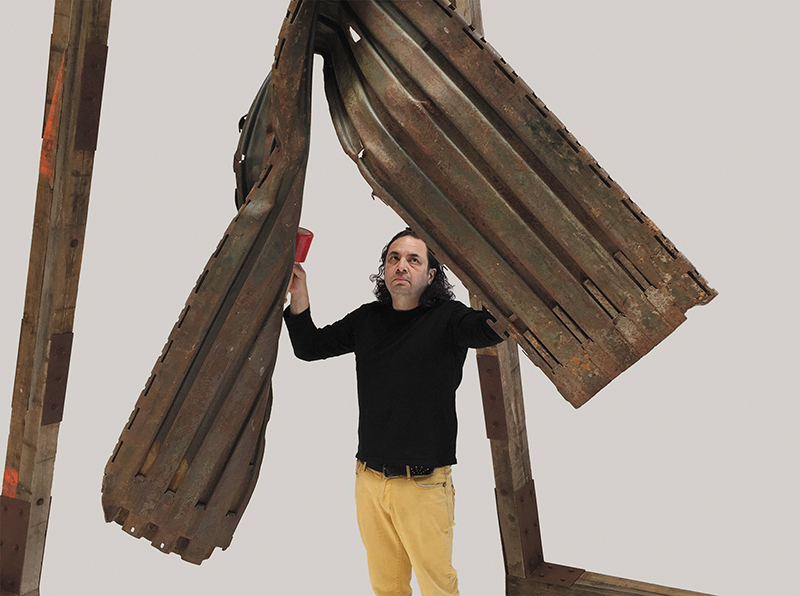 “It’s in my nature to immerse myself into new territories, to cross borders,” says Guillermo Galindo, a contemporary classical composer. Galindo creates and plays musical instruments that he makes from objects found on the U.S.-Mexico border. More than just sonic-semiotic experimentalism, he performs original work based in Mesoamerican healing rituals when he plays these border-found instruments—“sonic healing meets performance art,” as Galindo puts it. These objects retain the essence of immigrants crossing the border and communicate the border’s sense of place. By performing these instruments, Galindo seeks to cure the “wounds of immigration” and to transition our focus from the politics and numbers to the human beings therein: “What I’m trying to do here is to resonate with the viewer or listener, to give her a deeper understanding of the tragedy that is happening, every day, before our eyes,” he says. “These are healing rituals, [and] I am making the wounds audible. I want people to feel them. The objects that I play are sacred. They send healing energy—not only to this border, but to all the borders in the world.” Galindo will visit Salt Lake City on Thursday, Oct. 6, at the Utah Museum of Fine Art’s (UMFA) Katherine W. and Ezekiel R. Dumke Jr. Auditorium to perform some of these instruments and to discuss this project, Border Cantos.

Galindo initially collected objects along the border in 2010, before he met photographer Richard Misrach. Galindo turned them into instruments for what became Voces del desierto, a performance in which he enmeshed some of these instruments with a classical wind quintet. Once he met Misrach in 2011, they began finding more objects to work into musical instruments together. As Galindo became busy with other projects and teaching, “Richard had the opportunity to stay there longer, and he managed to establish some relationships with people, with communities on the border,” says Galindo. Misrach used this time to photograph a larger variety of objects and would ask Galindo whether he could transform them. The pair would eventually publish a Border Cantos book in February 2016, which includes Misrach’s photos of the objects in their border-side forms, their landscape, their instrumental incarnations and Galindo’s graphic musical scores based on Misrach’s photographs.

Bordercantos.com hosts videos of Galindo performing instruments such as the Piñata de cartuchos | Shell Piñata, a metal piñata draped with a net of bullet shells with a core in the shape of a soccer ball. In his video Limpia | Cleansing, Galindo shakes the Piñata de cartuchos and spins the lever of an instrument called Zapatello to manipulate pulleys that stamp reclaimed boots onto a drum. Galindo maintains that instruments like these explore their owners’ imaginary stories via their personal belongings. “The Mesoamerican people, such as the Mayans and the Aztecs and many American Indian communities, believe that the sound of the object is attached to the very essence of the object,” he says. “Any object surrounding your life has a connection with your own reality—both its physical presence and the sound it makes. Through it, we can connect with its previous owner and his/her journey.” Galindo deems these instruments “cyber-totemic sonic objects”—their sheer presence “transmits sounds from and to other realities.”

Through their histories, these objects become talismans “that connect us to other levels of understanding,” he says. Galindo’s performance of instruments that comprise objects like discarded packs of gum, soda bottles and soccer jerseys enacts Galindo’s “humble, peaceful and spiritual attempt to set in motion a possible solution to a tragedy through the magic of art.” This poetic, metaphysical healing process, through sound, treats the physical and spiritual wounds incurred in the process of immigration.

The act of playing these instruments is a cornerstone of Border Cantos. Galindo recognizes the parity of music and dance in many cultures, like that of the Seri Indians of Northern Mexico. When playing something such as a shaker, “even the way that the shaker is played suggests that you move in a certain way,” he says. “You can get all the possibilities of the sound of that instrument basically by moving your body in a certain way. So, it becomes a dance, and the dance becomes a ritual, and the ritual becomes the healing.”

Galindo will play a brand-new instrument at the UMFA, Clavifono: “It’s a box, and it has a molar bone of a mule as a bridge,  and it has a neck of a guitar,” he says, “and, inside, it’s covered with cardboard from border-control ammunition, and it has a big, [rusty] nail from a train that crosses the border.” Though he has developed ensemble pieces within the Border Cantos series, such as quartet Resonant Shadows/Circular Calls, Galindo will perform a solo piece for SLC on Oct. 6, which he was in the throes of writing at the time of this interview. He’ll use a graphical score to notate the performance and will sign Border Cantos books, which will also be for sale.

Galindo notes the power of absence in this series. “Both in Richard’s photographs and in my music, there’s one thing: There’s only the soul of the people. There’s the absence present,” Galindo says. These absences entreat us to fill them “with imagination of how to change things. We have to be creative [about] how to make things better. Building a wall and deporting people is not very imaginative. … There are many examples of people who have used their imagination in constructive ways, and we would like our project to be part of that way of thinking.”