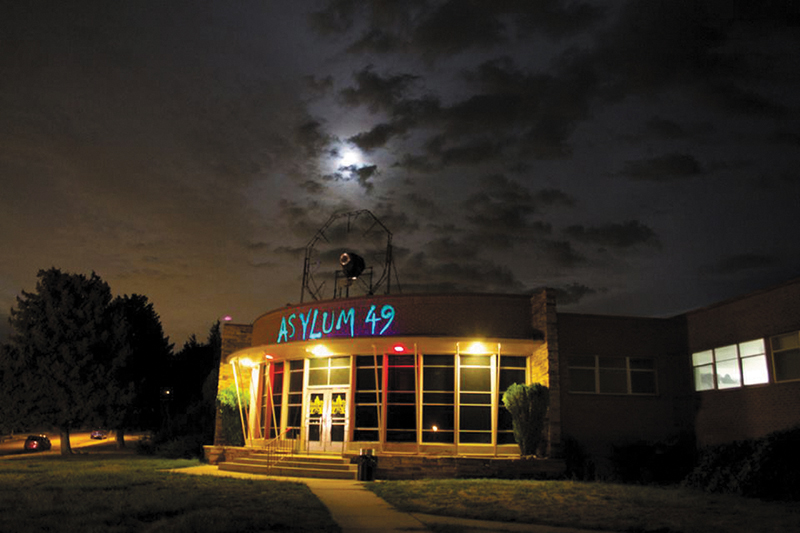 A Haunting of the Living and the Dead: Asylum 49

The old Tooele Valley Hospital sits with a cemetery in its backyard. It’s a stark reminder of a person’s own mortality for anyone who visits. The hospital opened its doors in 1953, but for the last 12 years, it’s been home to the Asylum 49 haunted attraction (as in a staged attraction), which is apt to scare the piss out of folks who dare enter. The fear and dark atmosphere of Asylum 49 eerily complements the notoriously haunted hospital property. In addition to the haunted attraction, the owners of Asylum 49 have for the past 11 years hosted paranormal tours and investigations (as in actual paranormal-activity sightings) for the public.

“You will be touched, may be carried off by the doctors, and may be separated from your group,” says Cami. “It is very intense and not recommended for children, adults who don’t like being scared, pregnant women or physically or mentally impaired individuals. Come prepared to be scared and to have fun with it! Full contact isn’t for everyone, so if you can’t handle the intensity, we would rather you not come.”

At first, nobody was aware that the hospital was haunted—“until we started experiencing strange and unexplained things like objects moving from one place to another, voices and other sounds being heard when no one else was in the building,” says Cami. With these experiences in tow, a paranormal investigation team came to explore the property. After multiple investigations, they deemed the hospital haunted, “with a staggering amount of evidence,” Cami says. The owners of Asylum 49 felt that it was important for others to experience the paranormal for themselves, so they began the ghost tours the season after they opened the Asylum 49 haunted attraction.

Cami says that there are two different experiences for the ghost tours. There are public tours, which she says are more geared for the entertainment factor, including a tour of the hospital for the curious or novices of paranormal investigations. For more seasoned researches, there are the private tours. Tours go from 8 p.m. to 1 a.m., or there is also an overnight experience from 8 p.m. to 8 a.m. Cami, who runs the tours and is also a paranormal investigator and researcher, co-authored the book The Haunting of Ayslum 49 with Richard Estep. As to why she thinks that the hospital may be haunted, she says “It’s unclear why hauntings occur, though there are many theories. As for the hospital, it’s obviously a place where a lot of people have passed away. We are also right next door to the town cemetery. Another theory is that we frequently have people coming for the express purpose of talking to the spirits. I believe that they enjoy the conversation and the recognition that they are here—especially in a world where it’s unpopular to believe in their existence.”

Cami likes to keep the haunted attraction and the paranormal portion of the hospital separate, but sometimes the two collide for visitors of the haunted attraction in the fall. “Our spirits don’t always follow the rules and have been known to lead unwary customers into dead ends and get them lost in the mazes,” Cami says. “Oftentimes, they don’t even know they just met a ghost.”

What happens after we die is still one of life’s greatest mysteries. The quote, “Look, I know the supernatural is something that isn’t supposed to happen, but it does happen,” from the 1963 film The Haunting, always sticks in my head when it comes to the paranormal. As kids, we hear ghost stories, and so many people have their own paranormal experiences or wish to have them. Asylum 49 offers just that in their ghost tours, which are an extension of the owners’ own interest and research into that unknown phenomenon. “I have experienced things from EVPs to disembodied voices to objects moving to doors opening or closing to seeing full bodies’ apparitions and even talking to one,” Cami says. “We have a large amount of evidence that would suggest that there are both residual and intelligent hauntings occurring at Asylum 49.”

Asylum 49 is located in Tooele, Utah, at 140 E. 200 S. Haunt season goes until Nov. 4, Tuesday through Thursday, 7 p.m.–10 p.m.; Friday and Saturday p.m. to Midnight; Closed Sunday and Monday. Wednesdays are dubbed Wimpy Wednesday for people who want to experience the haunt without full contact. Ghost tours are offered December through August. For the rules of the full contact haunt and to find out more about the ghost tours, go to asylum49.com.