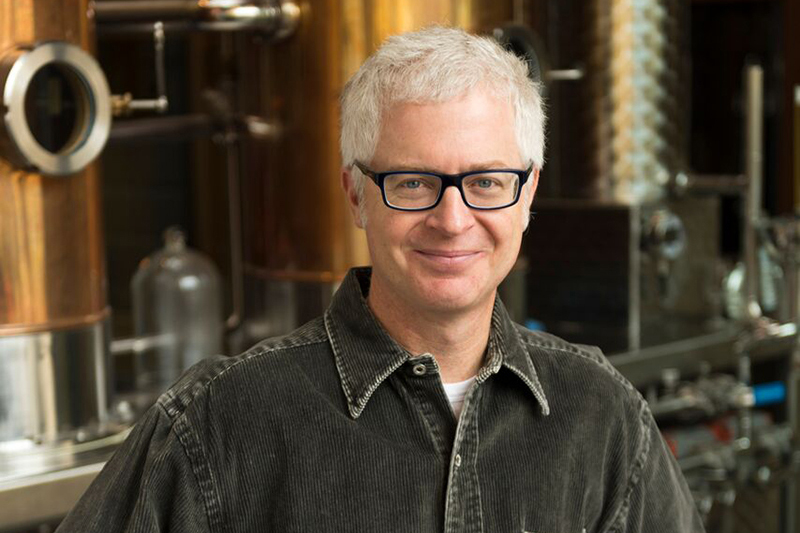 Tucked up in the high desert wilderness outside the tiny town of Wanship, the new High West Distillery location is a sight to behold. Its warm, Western-inspired scheme of wood, industrial metal, local vegetation and beautiful water features are as welcoming as its staff. This distillery is a huge achievement for its owner, High West CEO David Perkins, who already made history opening the original High West Park City location in 2007, Utah’s first distillery since the 1870s. Perkins is excited to debut his next spirit—Valley Tan Whiskey, which should legitimately be lobbied to become our state alcoholic beverage (if there is such a thing).

Perkins is native to Denver, has lived all across the country and forged his formal education in biochemistry—an education that transferred easily over to the demands of distilling and brewing. He is also a big fan of history, and when High West was still only a future dream for him and his wife, they did ample research on potential locations for a new, bold whiskey distillery. They found the rich history they were looking for in Utah. “People always ask, ‘Why did you do this in Utah?’ For me, it was important to have an answer rooted in some logical rationality,” he says. “The first answer is: There was whiskey here. It’s underrated. I like underrated places. It’s a great place to live—it’s beautiful.” Perkins proposed to his wife in Moab, and it wasn’t long after that they agreed that Utah was perfect for their dream of a distillery. Perkins quit his job in the biomedical industry and relocated his family from San Francisco. Since then, High West’s spirits have gained awards and a significant reputation as a quality source of unique, Western-inspired whiskeys.

It might be news to even lifelong Utahns to hear that the LDS pioneers who settled here actually had their own “brand” of whiskey, mostly thanks to Brigham Young’s more tolerant stance on breaking the Word of Wisdom (especially when it came to selling to outsiders) when he led the LDS Church. Valley Tan was famous enough to have been discussed by giants of history like Mark Twain and explorer/historian Sir Richard Francis Burton. In fact, it is from Burton’s writings about the Mormons and Brigham Young where Perkins found the recipe. Originally, High West had used oats as a base, but then discovered that the Mormons had actually been using wheat. “We have a beautiful wheat whiskey aged in used barrels—used barrels contribute less oakiness, so it’s a delicate, pretty whiskey,” he says. “We imagine it might have been something like the Mormons had, and it will be younger because people didn’t age whiskey for a long time back then. So having history there, having a story there … Why wouldn’t you make it?” Much like the difference between red and white wine, says Perkins, the Valley Tan is lighter and more delicate than other whiskeys—perfect for sipping. They are currently building their reserves of the flavor created from the new wheat base and are hoping to launch it next year. Curious drinkers can still find bottles of the original oat-based Valley Tan from some of High West’s distributors.

High West’s whiskeys have already gained a much-deserved reputation for their quality, but some may not know that the distillery also has its own signature vodka recipes: the Vodka 7000 and Vodka 7000 Peach, both of which have also earned their own distinctions. Both spirits are named for the elevation at which they are distilled at the Park City facility, and the peach version is a seasonal variety that uses all-local Utah peach crop from farmer Leon Wilson of Roy for its flavoring. They are also one of only a small handful of vodkas created worldwide that use oats rather than wheat or other grains. “One reason, early on, was just to be different,” says Perkins. “When you’re new and small, you have to have something different. Two, we used other grains and tested them all, and oats just had a wonderful flavor that we thought married up well with vodka, just because you want subtleness—and the notes are subtle. It’s a creamy vodka.”

As High West’s success grew, Perkins knew that he would need to expand out from his original Park City location, and the universe put Blue Sky Ranch owner Mike Phillips in his path. Phillips has plans to build a Western-themed resort with a hotel on his his 3,000-acre working cattle ranch, and proposed it as the perfect location for High West to build their new distillery. Perkins knew it would be perfect. “For us, having a high-end, dude ranch hotel place with the distillery is kind of an ultimate combination,” Perkins says. “Our brand is Western, but to be on a ranch in the West, I couldn’t dream of a better place to do it. It was serendipity, I would say.” The bigger resort features are still unfinished, but the distillery has already opened to the public with great success.

The Wanship distillery itself still has its own big plans on the horizon, including the addition of a lunch service, more in-depth and extensive tours, and the opening of a whiskey-education space where visitors of any experience level can learn how to become a connoisseur of whiskey. Education on the craft is an enormous part of what Perkins wants to offer to the public—aside from the spirits themselves. “That’s kind of why we exist,” Perkins says. “At the end of the day, you have to share your passion, and we love whiskey, and we want to teach people to love whiskey.”