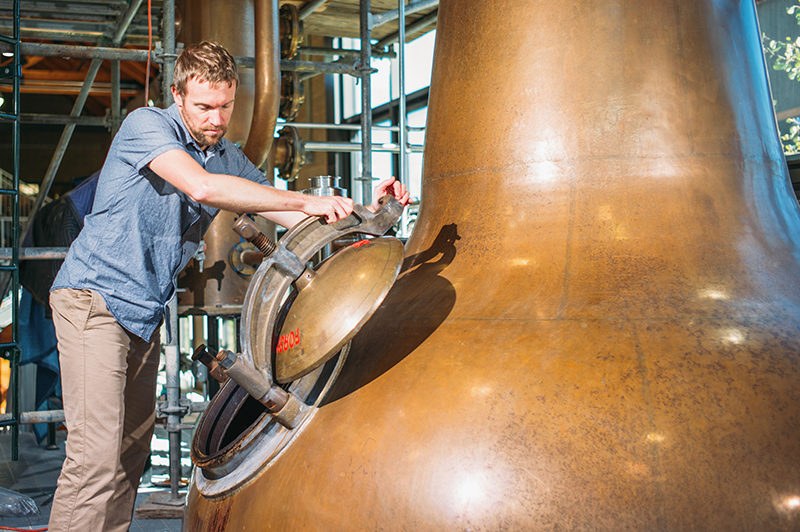 The High West Distillery Wanship location is enormous in size and beautifully designed in a manner befitting its Blue Sky surroundings. It is tucked between the hills next to I-80, way the hell outside of Salt Lake City, past a guard house and a long, winding road. It represents the summation of three years of planning for the nearly decade-old brand of whiskey makers. A landscaped creek runs through the middle of the multi-building facility. It is a beautiful mix of exposed wood, glass and plant life. It seems almost Wonka-esque in scope, though the building is dedicated to producing spirits rather than sweets. It is here, along with their ski-in distillery in the middle of Park City, where High West is producing their fourth release of Valley Tan, a 100-percent Utah-made whiskey using Utah-grown wheat. Their purpose for making the whiskey, according to master distiller Brendan Coyle, was “to bring the name, the story and to source as much locally as possible to tie it all together.”

The name Valley Tan, says Coyle, comes from the name of the whiskey that the Mormons made in the past under Brigham Young’s direction, as well as its lighter coloring. It doesn’t just look different, either. “It’s going to have those more delicate, lighter florals, fruit flavors and aromas in it,” says Coyle. “It was aged in oak barrels that were already used once for primary maturation … What that does is it imparts a lighter color [and] lighter floral characteristics, as opposed to those really big, heavy, rich amber colors and caramel vanilla flavors you get out of rye whiskeys and bourbon whiskeys.”

Visitors to High West’s temple of taste might immediately be hit with the sweet smell of mash, which permeates the entire building. Most of the operations take place in huge rooms filled with natural light by the many windows. Large, looming, polished tanks, washbacks and tubing fill the space along with metal staircases. The crown jewel is a copper still, which looks like an upturned cornucopia with the word “SCOTLAND” emblazoned on its door in block letters. There are wooden barrels neatly lined in another corner, which have been filled and are awaiting transport.

Within another, smaller, sealed-off room are hundreds of bottles and glassware, along with a computer bearing tiny numbers. This is where taste tests and experiments occur, and it looks like a proper laboratory—because it is. It takes a lot of science to create a dependable product, and Coyle personally tastes each batch to make sure it tastes right. He knows what he is doing, too—he has a Masters Degree in Brewing and Distilling Sciences from an Edinburgh school called Heriot-Watt University.

High West was acquired last month by New York–based, publicly traded drinks company Constellation Brands. “When it came to the next step for High West, we wanted to work with the right partner that will help us grow further while maintaining our culture and core values,” says High West CEO John Esposito in a press release. “With the strength of the Constellation Brands team, we will be able to reach more consumers and continue our track record of innovation.” The distillery still specializes in blended whiskeys. “Historically, blended whiskeys have gotten a bad rap,” says Coyle. “In reality, blended whiskeys are quite common through history and through the entire distilled spirits industry … one distiller might make one flavor profile and whiskey very, very well, so he’d actually trade barrels of his own for other components out there to balance out the flavor profile of his product.” Coyle says that they seek to educate consumers and explain why blending gives a better, more consistent flavor profile.

The whiskey made in their Wanship and Park City locations can be found in multiple countries and 49 U.S. states, which makes it the most widely distributed Utah-based spirit. Despite this national and international presence, Coyle says that their new facility is only operating at 16 percent of its potential capacity, as they originally designed it with widespread future growth in mind. The new facility has ample room for food and beverage events, and they even make it available for receptions and corporate events. Brunch is served on Sundays, and the brewery is open for tours Wednesday through Sunday, where visitors can walk through the brewing process and learn about the science of making whiskey. High West Distillery has even bigger plans in the works as well. “I want this to be a world-class tasting room and production facility,” says Coyle. “I think that’s something that is unique. You’ve got a lot of distilleries throughout the country and in Utah, and there’s a bunch popping up, and you’re not going to have this experience.”