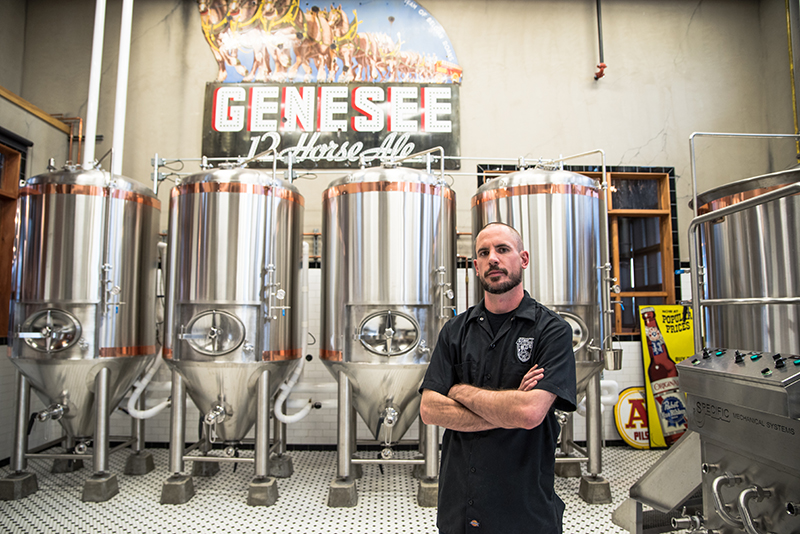 Beer is an ancient and perennial art that can tell subtle stories of the regions from which it hails. Somewhere just off Interstate 15, Exit 260, in Springville, Utah, the craft of beer brewing is being carefully considered. Springville has earned the little-known title of “art city” by its residents, and art is indeed at work in the spotless Strap Tank Brewing Co. brewing room, where—as genial general manager Stu Brown states—“the magic happens.”

From the front entrance, both a friendly hostess and a replica of the über-rare Harley Davidson Strap Tank—the pub’s namesake—greeted me. As it happens, this 110-year old artifact with its pleasant patina can be found in the genuine flesh across the parking lot at Legends Motorcycle, the publicly open museum collection of founder Rick Salisbury’s stunning 250 bikes from across Americana and a bit beyond. Salisbury, head brewer Mike Dymowski, Brown and the friendly staff have thought out all the details, down to the cleverly upcycled shop towel napkins and period-appropriate paint on the walls. A culture of artistic appreciation by the surrounding community, matched with the lovingly creative risk-taking of Strap Tank’s management and ownership, are married into what feels like a miniature theme park of bike and beer culture.

Strap Tank’s beer menu is replete with nuanced, flavorful brews with unique profiles and no undesired or unintentional artifacts. The complex boutique beers run the gamut from fruity, sparkly saisons to daringly hazy, hoppy pale ales.  After sampling the wide array of options, I landed on a potent adoration for the East Side Ride spiced amber ale. This strangely glorious concoction was head brewer Dymowski’s inspiration from his time in Bali, Indonesia. East Side Ride is a classic, clean amber ale with stunning ginger, lemongrass and honey, which imparts an unexpected and delectable Asian fusion flavor. Not merely does the menu beguile at Strap Tank, the environment is rich with details meant to mimic the first Harley Davidson factory and pay homage to the original, albeit somewhat secretive, Utah brewing traditions. Strap Tank is heritage and historically honorable, and it shows in every angle.

In conjunction with my visit to Strap Tank’s magical mecca of beer artistry, palate-pleasing food pairings and striking aesthetic, I connected with head brewer Dymowski to learn more about his personal journey and experiences as an integral part of Utah’s burgeoning beer culture.

SLUG: Can you talk to us about when you started brewing and walk us through the timeline of your brewing career and Strap Tank?
Dymowski: My first batch was 1999 or 2000. I’m still looking for that notebook. I was a home brewer until 2010, when I started working on a packaging line of a brewery. A couple months later, I was brewing, and I haven’t looked back since. I got to help during the last four months of construction at Strap Tank and put the final touches on Rick’s brewery design. We opened in June of 2016.

SLUG: You began brewing in your teens. What was the toughest and best part of learning the process?
Dymowski: Patience, organization and cleaning.

SLUG: Who were your mentors? What were the influences or legacies that inspired you to start brewing?
Dymowski: Family and fellow home brewers. I read anything I could by John Palmer and Charlie Papazian and listened to the Brewing Network. I read everything about the history and ingredients and processes involved in beer. I drank Real Ale, Shiner and Celis Brewing in Texas since I was young, and a ton of modern brewers from the area continue to inspire me.

SLUG: It seems like craft brewing was a bonding activity in your family. Tell us more about that.
Dymowski: By having a relationship with beer early on I learned to respect it, and I think in a lot of ways when I was an adult, that parent-curated relationship was what separated me from the kids binge-drinking macro-lager. Like most things, approaching it from education rather than ignorance seems to be the best approach.

SLUG: Did you originally develop your skills via whole-grain or extracts? Why?
Dymowski: I started with extract because it’s easier, but you’re only as good as your ingredients, so I quickly transitioned to all-grain, which is where a lot of customization/experimentation takes place.

SLUG: Was there any fear for you in leaving behind a college degree to pursue beer making full time?
Dymowski: When you study philosophy in school, you’d better know how you’re going to make money, and it’s nice to have a manufacturing job that isn’t going anywhere.

SLUG: What are the limitations of craft brewing in this region based on your experience? How about the strengths?
Dymowski: Every brewer I’ve met has to invest much more capital and time into packaging beer in Utah because of the legislative limitations placed on craft brewers. That there is no cold supply-chain option for most Utah beer makes most of our heads spin. It’s backwards business and holds back job-creation for us, while helping internationally owned brands dominate market share.

SLUG: What are your favorite hops and why?
Dymowski: Huell Melon, Saaz and EKG. They are versatile and classic, and I never get tired of beers made with them.

SLUG: How do you set yourself apart from other regional brewers? What are some of the wildest ingredients that you’ve brewed with?
Dymowski: Since our bottling line is just around the corner, we’re looking into foraging traditional food-safe ingredients from the mountains of Utah Valley and using them in our beer. This includes yarrow, elderflower and elderberry, spruce-tip and even local yeast … Because we’re a pub, we get to focus on providing beer and food for a very small footprint that is Utah Valley. We’re currently working up some historical and foraged beers that use ingredients within just a few miles of the brewery.

SLUG: Tell me more about Strap Tank‘s connection with local bike culture. Do you share any of that connection?
Dymowski: Absolutely. Our brother business across the street is Legends Motorcycles, which hosts rides and special events all the time. We love all things executed with craft and heritage, done right. And there are a lot of motorcycles and beers that share that, as well as a lot of people who respond to those things who wouldn’t identify as a biker or beer connoisseur.

SLUG: What are Strap Tank’s current special beers and regular offerings?
Dymowski: We currently have five core beers and seven specialties, which I come up with based on what I, and the customers, want to drink. I rarely like bombastic beers, so generally you’ll see beers focused on nuance and drinkability that are layered with malt or hop depth. I’m also formulating recipes for our first high-point beers to be released in bottle form later this year.

SLUG: Could you speak to any personal interactions you’ve had with community members, particularly when you thought you might experience resistance, but were instead able to create positive relationships in the town?
Dymowski: The community response has been wholeheartedly positive, both from drinkers and non-drinkers. Brewpubs are the opposite of a seedy dive-bar, and we all want to bring our families to a clean, family-friendly spot with great beer and atmosphere!

SLUG: What suggestions do you have for someone beginning their craft brewing exploration?
Dymowski: Have fun with the multitude of flavors. You’ll learn a lot from tasting critically and discussing it with others. Plus, beer is made to be enjoyed socially.

On June 1, Strap Tank celebrated its first year of life as an oasis of gustatory artisanship. On the horizon, Utah beer lovers can anticipate some new high-point beers, saisons and a special-edition anniversary brew made from locally foraged ingredients. New projects, including kitschy mobile-distribution vehicles making summer and fall appearances at Brian Head and the Utah Beer Festival mean that Strap Tank will be sharing the glory of their art across the valley. It’s a creation that I cannot recommend enough, and one I’ll surely be imbibing again.