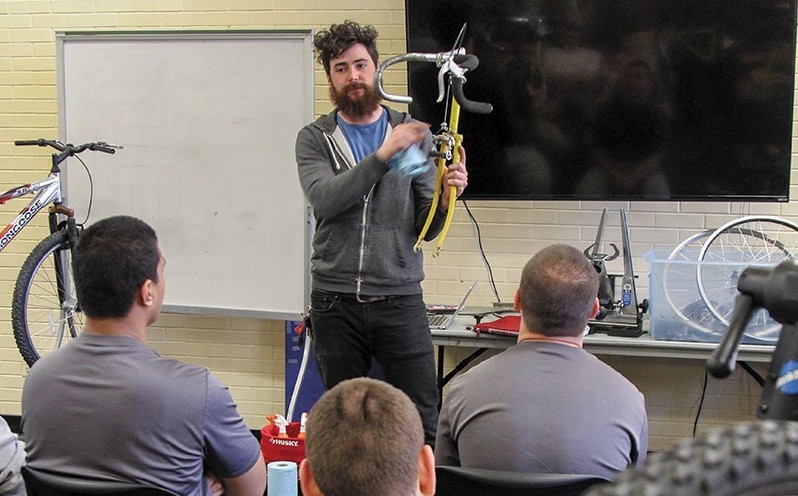 For many people, a bicycle is little more than two wheels, a pair of handlebars and a puzzling riddle as to why cyclists don’t just drive a car like everyone else. It’s something that some notice in their peripheral vision while they’re driving to work, not recognizing the significance of the humble bicycle. Setting foot inside the small, unassuming mechanic shop that the Salt Lake Bicycle Collective calls home is the quickest way to change all of that. For nearly 15 years, the Bicycle Collective has been a bastion of cycle-related community service, providing everything from volunteer mechanic programs to free bikes for underprivileged children. Over the past few months, the collective has teamed up with the Youth in Custody Department of the Utah State Office of Education to pilot a vocational program targeted at young people incarcerated in state-run detention centers. “This is a really great way to provide some support and restorative justice to youths that have experienced incarceration,” says Sharah Yaddaw, director of the Bicycle Collective’s Salt Lake chapter. “It gives them an opportunity to do something productive and positive.”

Before coming to the Salt Lake Bicycle Collective in the fall of 2015, Yaddaw had spent six years working with homeless and runaway youth. Her passion for helping marginalized young people has fueled her enthusiasm for this program. “The Bicycle Collective had been talking about a vocational program since before I got here,” she says. “When I got here, we started meeting with Travis Cook and put together a plan.”

Cook, a specialist in the USOE’s Youth in Custody Department, was also extremely invested in this program. He got the idea from organizations like the Oregon Youth Authority, who have partnered with different community groups to provide service-learning programs to at-risk youth. Cook was already familiar with the work of the Bicycle Collective, and he decided that a partnership between their organization and the USOE would be a good fit. “It was serendipity in a lot of ways,” he says. “When I reached out to the Bicycle Collective, they were already in the process of building a vocational program.”

Every service-learning program needs a considerate and involved teacher, and the Bicycle Collective’s own Kevin “KG” Greene eagerly volunteered to share his knowledge with incarcerated students. “I always wanted to be a teacher, but I never really liked the idea of going to college and getting a bunch of debt,” Greene says. “When this opportunity popped up in conversation, it was like a little spark.” Since accepting this position, Greene teaches four classes a week at both Wasatch and Decker Lake youth facilities. By the end of the program, Greene’s objective is to present the students with a completely wrecked bicycle and have his crew put their knowledge to the test in order to get it back in working condition. So far, he’s been amazed with the program’s success. “The students are very respectful and receptive, and it’s something I really enjoy doing,” Greene says. “It’s always fun to see what kinds of jokes the guys can make out of these bike parts.”

While the short-term goal is to provide incarcerated students with a nontraditional learning environment where they can work with their hands and solve problems in real time, there are some long-term benefits to this vocational program as well. “Two goals that we’ve set are to have the students reconnect with the Bicycle Collective in the outside world and give them skills that will become an employment opportunity,” Greene says. Reconnecting with the Bicycle Collective will give the students a safe haven in the difficult transition process between incarceration and readjusting to life outside of a detention facility. In addition, students in the vocational program will have a 12-week bicycle maintenance course under their belts, should they want to pursue employment in a mechanical field.

As the program is in the piloting process, the joint effort is currently evaluating the logistical questions surrounding the program’s sustainability. “I can’t speak to any major hiccups,” Cook says, “just traditional safety and security conversations, but that’s true for any project or initiative that we would consider.” The resources provided by the youth detention facilities are also a factor under consideration. “Both facilities are interested in doing the program again,” Greene says. “As far as we’re concerned, we’re trying to grow our youth education as much as we possibly can. The more classes they want, the more that we’ll give to them.”

Teaching incarcerated youth something that can bring them satisfaction and possibly employment in the outside world fulfills a huge need in a population that tends to get swept under the rug. This collaboration between the USOE and the Bicycle Collective is a shining example of how community action can make a difference. “A lot of youth who have been incarcerated are used to having case managers and probation officers telling them what to do,” Yaddaw says. “We give them the opportunity to come to the Bicycle Collective and choose to engage in something positive.”

For those interested in helping to keep this program afloat, both the Bicycle Collective and the Utah Department of Juvenile Justice (who implement the day-to-day activities of Youth in Custody) offer volunteer opportunities. Also, keep the Bicycle Collective in mind if you’re looking to buy a bike or donate an old one.