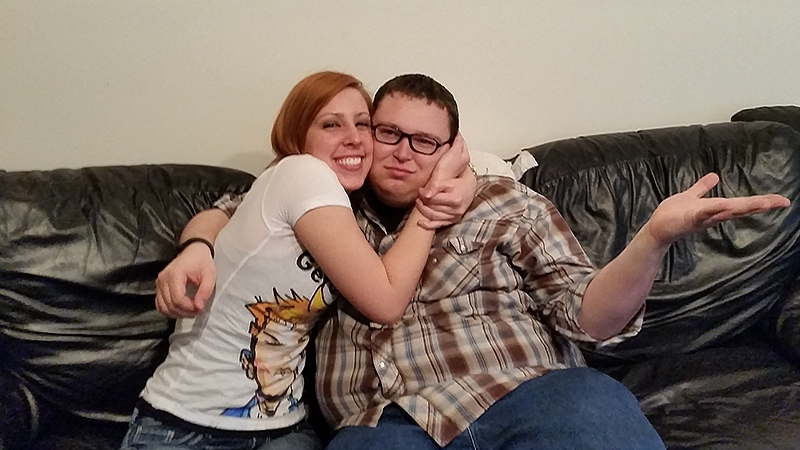 In Movie Nerds We Trust: Christopher James and Quinci Staker

Christopher James is a local standup comedian, screenwriter and nerd extraordinaire. Quinci Staker is a film buff, actress and cheeky redhead. Together, they are In Movie Nerds We Trust, a Utah podcast featuring uncensored, often hilarious discussions on movies you should watch when you just need some honest suggestions. The duo often teams up with other film nerds in our great state, including comedians, artists, filmmakers and expert geeks. In their short time on the airwaves, they have managed to feature 22 episodes (so far) with over 20 guests, and have talked about more than 60 featured movies, not to mention the tangents that will often get airtime (Flubber, anyone?). The show is always free to download or stream, is locally produced and locally sponsored. The films, on the other hand, run the range of everything that Hollywood has produced—winners, losers and everything inbetween. They took a chance to sit down with SLUG to get into the nitty-gritty of their podcast, their philosophy on why people love films, as well as their own love for the medium.James is a movie nerd/connoisseur who has been a fan of movies since he was a kid, watching late-night movies with his mom. Interested in the behind the scenes and what he saw as “the magic behind it,” he was sucked into the world. Movies became an escape for him. “There’s always going to be one thing that spreads out over time,” he says. “It spiderwebs out.” I found out that he was a big fan of dark films like Batman and Beetlejuice as well as goofy comedies like Billy Madison and Bio-Dome. He started out as a standup comedian nine years ago, partly due to his love for comedy and the films that had grown on him. It was a kind of hybrid for him.

He took a break from comedy to pursue filmmaking in his early 20s, spending a few months pounding out a script and actively trying to get it made. His repertoire includes some short films as well as an elusive “stripper documentary” that he didn’t delve into too much, to Staker’s surprise. He has decided that comedy is more of his thing these days. He says, “Making people laugh is one of the best gifts that someone can have.” He’s been interested in documenting the conversations people have about film for awhile. “I feel like everyone likes movies, despite who they are or what they do,” says James. “It’s weird—it’s one of those things that if you love something, you can jabber on about it.”

The bubbly counterpart to James is Quinci Staker, who was born with film in her blood. She has been acting since the second grade, focusing on film when she turned 18. Staker and James met on a casting call that he did on his script. In fact, he still had her head shot years later when she joined his podcast, which wasn’t creepy at all or anything, according to Staker. Her goal is to be able to take a part in at least one film in every genre, and her passion has always really been in drama. This is her first podcast, and she jumped on the opportunity to co-host, as she shared the same love and nerdiness for film as James.

When James approaches people to be on the show, he asks for their top 20 favorite films. “Everybody has their go-to movies that they either love talking about or they love telling people to see.” He’s got the set up of mics, a laptop, and couches in the living room of his apartment. James sees this as an opportunity to have an uncensored talk about movies where anything can happen with people who are experts on the movies that they love. “You can’t judge a book by it’s cover,” says Staker. “I know that there have been a lot of people and the stuff that they’re into, you would’ve never known in a million years.”

Staker reminisces on her favorite episode, “When Cinematic Animals Attack,” with the one and only Melissa Merlot. “I don’t think I’ve really laughed as much as I did with Melissa,” she says with a huge smile on her face. James agrees, “Melissa has the most infectious laugh, and she could say the stupidest thing, and I’d still laugh.” One of their most memorable moments was on the recent Roadtrips episode where things got really uncomfortable and up close and personal between James, Staker and guest Shayne Smith talking about their, uh, sexual encounters. “Every episode has genuine moments, and I can pick out a favorite moment from every one,” says James.

Just to put the hosts on the spot, I had to turn the tables and find out what their favorite movies are. In order to trust these nerds as an authority on the matter, this is the most important question that could be asked. Staker is an all-time fan of Trainspotting, and credits this as the film that got her interested in filmmaking. James names underground and underappreciated dark comedy Death to Smoochy. Although, he’s not shy about his absolute love for romantic comedies, either. Now, if you think you can trust these nerds, you’ve got some podcasts to listen to.

You can download the In Movie Nerds We Trust podcast on iTunes and Stitcher. Jordon Mazzioti is their current sponsor and also designed their eye-popping graphics. Check out local filmmakers at the upcoming FilmQuest event, and stay tuned for live events coming up at summer’s end for the duo. You can also follow them on facebook and twitter to get exclusives on new episodes and see pictures from the taping.