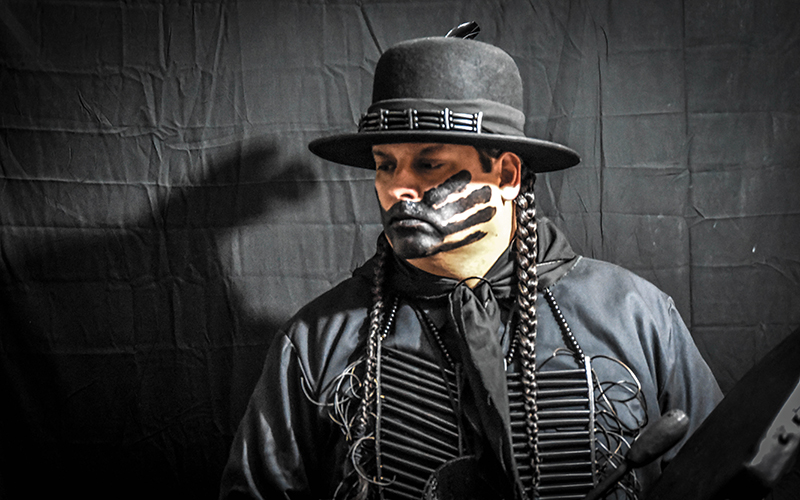 Gregg Deal is a man who exists boldly in tense dualities. A member of the Pyramid Lake Piute tribe and an accomplished multimedia and performance artist and activist, Deal dissolves white-colonialist narratives of indigenous identity with complex and challenging mediums. Formerly a Utah resident, Deal will return in April for the Rio Gallery’s artist reception for the exhibit Transcontinental: People, Place, Impact. In preparation for the performance, Deal indicates that it will depict Native erasure and the effects of the railroad and other related developments on indigenous populations.

“As a Native person, we believe that our artists are also our medicine people … I carry a medicine—I am obligated to my people,” says Deal of the fuel for his artistic fires. “To be asked to come back is exciting to me … Utah is my home. The discussion was about room for three-dimensional work. I suggested the performance piece. I like the idea that performance art gives marginalized people control in real time—for Native people, that’s a powerful medium to have.”

Deal, now a Colorado resident, has meaningful and complicated ties to Utah that deepen the value of his participation in the event. “I grew up in Park City, with a lot of the narratives of Utah,” Deal says. “There’s such a massive celebration for pioneer heritage and a benevolence that goes with that. Amid those narratives is loss of others. Americans are devoid of the context of indigenous existence. To challenge narratives is to challenge identity and the power structure that exists.”

Deal’s visit in April will add a different dimension to the Transcontinental show with the underlying message of his murals, visual art and performance pieces. Deal’s work includes an activist subtext and a bold willingness to address Native erasure, violence and cultural appropriation. “History is usually used as a tool to amplify greatness, and sometimes as a weapon,” Deal says. “Indigenous people use history as a tool to obtain truth. I am challenging the validity of the Transcontinental Railroad, and my very existence as a Native person stands in conflict with it. Indigenous existence stands in direct protest of the policies set forth to eliminate us. The railroad is a part of that.”

Deal’s performance addresses the impact of Western expansion on Native land and identity, while also sewing together the past and present via stark imagery and costuming. In his Transcontinental performance, Deal will offer an angle of awareness that is apparent in all of his works. “Americans don’t have context for modern Indigenous people,” he says. “As a result of that, you can provide [it] in a way people haven’t ever processed before. We know Lincoln was ‘the great emancipator,’ [but] no one knows that he signed off on the largest mass hanging in American history of 38 Dakota men a week before the proclamation was to be enacted. To Native people, there is not a distinction between the past and the present—they exist in the same space. Most of the context people have growing up with Dances with Wolves or John Wayne films based in relic and don’t give any room for the context of modern Native people who live in duality. I can go to ceremony and sing traditional songs and I can also listen to Kendrick Lamar. People don’t understand that duality.”

Deal’s performance will include a recurring character, “Nobody,” who comes from Deal’s September 2018 Invisible Loss Movement piece. Deal says, “The piece I am doing for this is an extension of the Invisible Loss Movement. I’ll be wearing dress, which is usually about lots of movement and color. The piece is about stripping all of that down, dancing in men’s traditional style, but only I could hear the music (and the audience could only hear the costume), and the colors are stripped down to black. The metaphor is that you exist and you don’t; you’re visible and invisible. I am taking that figure into the [Transcontinental exhibit] space entirely in black. I’ll sing a pan-Indian unity song and speak words on the effect of things like the railroad on Indigenous communities, which are not part of the conversation on the expansion of the West.”

Deal hopes that his return to Utah for the Transcontinental performance will convey a message he’s voiced again and again in his courageous and sometimes chilling artistry: “In order for us to see each other as human beings, we have to first reconcile the spaces that have been offended by the actions of our forefathers and foremothers,” he says. “This is to eulogize the events of the past and talk about it so that we can exist in space together.” As Deal writes in his artist statement, “The loss of land, the loss of authority in the space where stewardship was had, the loss of life and the loss of culture. How is this reconciled? What does one say? Can it bring us together when it has worked to segregate us?”

Gregg Deal’s Invisible Eulogy performance will be presented on April 19 at the artist’s reception at Rio Gallery at 7 p.m. The Transcontinental exhibit runs March 22–June 14 with the works of over 30 Utah artists, examining the legacy and impact of the Transcontinental Railroad. The exhibit is curated by Felicia Baca and Amanda Moore and is a program of the Utah Arts & Museums with funding from the Department of Heritage & Arts and the Spike 150 Commission. Via mixed mediums, the exhibit explores subjects including transportation, innovation, immigration and labor issues, continued impact on Indigenous communities, environmental issues, globalization and historical narratives.

Editorial Note: An earlier version of this article did not mention the exhibit’s curators or sources of funding. Changes have been made to credit these parties.