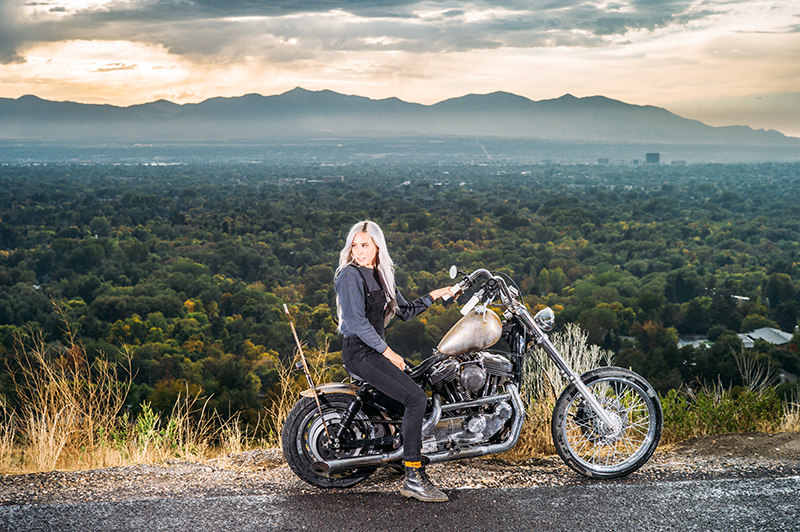 Jessica Haggett: Expanding the Horizon with The Litas

When Jessica Haggett first created The Litas, she had no idea what an impact it would have within the women’s motorcycle community. Originally a play on the word “leaders,” Haggett has become just that: a leader—both in her fearless mission to inspire women to ride motorcycles and as proof that you can turn a hobby into a career.

The Litas are now celebrating two years of inspiring women, and Haggett remains their humble founder, staying true to the original vision that she created for The Litas and their mission for inclusiveness within the motorcycle community. “I want to inspire girls to just be them and do what they want,” she says. “If that goes against gender norms, that’s not really on my mind.” Above all else, her love of motorcycling and the joy it has brought to her life keeps her devoted to creating a safe motorcycling community for women of all skill levels and riding styles. “I get messages from girls,” Haggett says, “saying I’ve inspired them to take the [motorcycle] rider course.”

The Litas have grown exponentially over the past two years, both locally and internationally, to over 2,000 women worldwide. As Jessica says, “It’s not that number that gets me. It’s the 96 cities that gets me.”

At the time of Jessica’s first interview with SLUG, the group comprised 22 women and had just organized their first Sunday Mass ride with Salt City Builds. Haggett says, “It’s funny to think back at our first interview—why were you even interviewing me?” Since then, The Litas have taken off and have nailed a notable one-year sponsorship with Indian Motorcycles, garnering The Litas more attention within the motorcycle community. Even before the sponsorship, The Litas continued to grow, and they now span the globe to include chapters from Argentina to the Netherlands to South Africa.

Haggett’s success with expanding The Litas globally, she says, was surprisingly easy through social media. “Geography isn’t really an issue anymore,” she says. However, this expansion didn’t come without hurdles. The main challenge was the time constraints she faced while working a full-time job. The success of the Litas and Hell Babes, the ever-growing motorcycle fashion line—which features local badass Moldie Goldie’s creations—has allowed Haggett to pursue her passion for motorcycle culture full-time by leaving her former company. With time no longer an issue, Haggett can devote herself to growing The Litas as not only their founder but also their content developer, event organizer and marketing expert, while also devoting more time to grow Hell Babes. Haggett looks forward to the coming year and is excited to watch what she has created grow and evolve. “I had no time,” she says. “I was always getting Mondays and Fridays off work to go to this stuff. I’m super excited to go on some long trips.”

Locally, Haggett says that she is still combatting stereotypes and criticism within the community, but that she has learned a lot about herself in how she battles negativity toward The Litas. “I’ve had to learn to ignore it, because more people get happiness from what I’m doing than are mad about it,” she says. “All of these women now have friends to ride with and an easy community to be a part of.” When reflecting on the past year, Haggett is grateful for the amazing opportunities that The Litas have opened up. Haggett says she, personally, has a lot to be proud of: “I’ve learned so much by just doing it,” she says. “I’ve pushed myself in ways I’ve never pushed myself before. If I have to get something done, I have to learn how to do it.” Her biggest motivator for pursuing The Litas full-time remains: to inspire women to be brave and do something hard. “It doesn’t have to be motorcycles,” Haggett says.

Despite the challenges, the heart of it all is Haggett’s love of two wheels. “Oh my god, The Dream Roll in August—that’s the farthest I’ve ever ridden,” she says. “We rode to Portland and then to Mt. Adams. My knees felt like they were going to explode out of my pants.” The best part of hitting the open road was the opportunity to hang out and go camping and swimming with other Litas from around North America. “It was cool meeting girls from other cities and to be given the opportunity to see what I’m doing,” she says.

Now that she can devote more time to running the group and riding, Haggett is excited to see what lies ahead for The Litas. She hopes to continue to grow The Litas with the same values of inclusiveness and community that she has engrained in the group since the beginning. “I want to stay open to different stuff happening, because that’s how you get excited about the next big thing,” she says.

While Haggett is enjoying the ride, we are eager to see what exciting events the ladies put on in the next season. Check out
thelitas.co for info on joining a chapter or upcoming rides. If you’re interested in learning how to ride a motorcycle, hop on the Motorcycle Safety Foundation website to find a skills class near you.