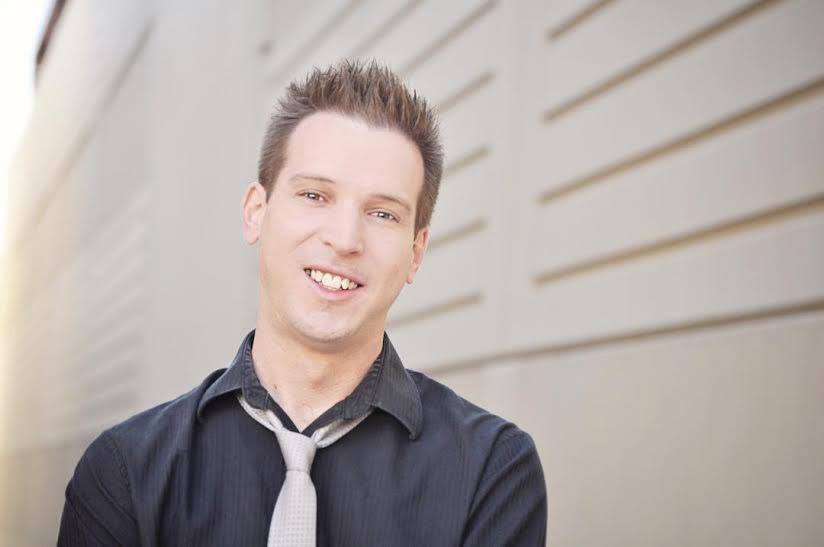 In Utah, we create only the best of the best. We all remember the ’96-’97 Utah Jazz, right? Well, along with a select handful of others, John Hilder is like the ’96 Jazz, in stand-up comic form. He’s one of the funniest people to ever have cut their chops in our Salty City, and he’s coming back for two nights to Club 50 West to record his second comedy album. Now hailing from Las Vegas with a steady career in comedy under his belt, Hilder is returning to his roots in Utah, both out of his love for the state and his admiration for the Utah comedy scene.

Hilder has been doing stand-up for an impressive 11 years. Born and raised here in Utah, he started doing stand-up in Las Vegas at 20, then moved back to Utah and did comedy off and on for about four years in his mid-20s before moving back to Vegas several years ago. Since then, his comedy career has blossomed, becoming bigger and funnier, turning Hilder into a regular name on the comedy circuit. The biggest advantage, in his opinion, is  “the sheer amount of stage time and legit clubs putting on comedy every night,” he says. “Vegas is just a town that’s more than other towns.” He points out that he’s always got crowds coming to him from all over the country. “Every night you get a focus group from 50 different states, you’re not going to get that anywhere else.” Having played both regularly in Las Vegas and all over Utah, Hilder has seen what our brand can bring to the table. “I think Utah comics, in my opinion, are stronger writers,” he says. “They’re more subtle, they come at it from a more cerebral place, where as in Vegas they kind of bludgeon you over the head with a joke to get attention. I think the potential for better, more quality jokes with stronger writing, is definitely better in Utah than it is on the Vegas market. So if you can develop those skills in Utah and take them on the road, I think that you’d be in good shape.” This kind of strength is why he tries to come back to town often. “I miss Utah greatly, especially the comics,” he says. “It’s really one of the most supportive, awesome scenes. I love everybody there, and I miss it very much.” And it’s not just our entertaining comedy scene that brings him back. “More than anything, I miss the nature. Vegas is such a manufactured, fake place. When you grow up at the base of the most beautiful mountains in the world, you’re pretty spoiled. There’s no ability to escape to nature here, and if you try, you’re just with everybody else trying to do the exact same thing,” Hilder says.

His show at Club 50 West will be his second album recording, his first in about six years. Hilder’s first album, Johnsense, was released by Hilder himself through CD Baby, and can be downloaded directly through CD Baby, Spotify, iTunes, and other platforms for $9.99. “People really seem to enjoy it,” Hilder says about the first album. “But for me, at this point, everything you write and you perform you get sick of immediately. You feel like everything you write after is better, even if people love it. I just feel like I can always do so much better.” Six years later, he’s ready with new material and more evolved jokes. He says he doesn’t just give up on solid material after recording, though. “I’m still doing it for awhile, just kind of touring on that. It will evolve. Even if I keep doing it, the jokes will change. It’s another reason I want to do the new album, because if there’s a joke still there from the first album, you wouldn’t notice because it’s changed so much.” He feels like he’s grown as a comic over the years, and that this is another milestone for him in his career. “If you haven’t listened in the last six years, I think there’s been a huge jump, and I’m excited to show people.” He has chosen to come back to Salt Lake City to record all of his albums. “I really do love it there. I love the crowds in Utah. I was born and raised there; I have friends and family here that are, hopefully, a built-in fan base, but more than that I recorded my first album in Salt Lake and had a great experience doing that. I kind of have it in my head that I’m always going to record my albums at home; I don’t know why. I don’t want to do it anywhere else.” This doesn’t seem to bear any stigma when his home base, for now, is in Las Vegas. In fact, Hilder thinks that it’s a strength to say you’re from the Beehive State, and then proceed to shatter expectations. “I’m more branded as a Utah person and not a Utah comic,” Hilder says “It’s this idea that we’re all Mormon and squeaky clean people. In a lot of ways, I think that it actually works to my advantage, because within five minutes of hearing me, you know that I’m not a typical person you’d expect from Utah, especially Utah comics. I think that people’s expectations of Utah comedy is dead wrong. My favorite comics in Utah don’t shy away from talking about anything.”

Hilder hasn’t encountered many issues in his material, once people understand he’s not out there to be squeaky clean.“I’ve been in trouble more for saying words than for topics. Some clubs don’t want you to say ‘fuck’; some just don’t care.” He says that no topic for him has ever really been taboo. “I don’t think anything’s out of bounds. There are things I don’t talk about because personally I’ve never found humor in it. There’s just certain things I don’t look at for myself, but I’ve heard funny jokes on just about every horrible subject you can imagine, and laugh at them. So I can’t say that they can’t be talked about, because I’ve laughed hard at everything.”

As far as his material goes, Hilder describes himself as a dirty observational comic. “I talk about the absurdity of daily life, which I think is every comic’s goal. You walk around and you see just how ridiculous things are. You want to roast the world.” Roasting, in this sense, is pointing out the flaws and ripping apart the cracks of what people try to gloss over or hide. “I feel like I do that to the world every day, and I want to share that with people.” Hilder’s got his own unique take on typical observational sets, but for those that have never seen him perform, he tries to pin down what people can expect. “I guess at that point you could call it ‘dirty Seinfeld,’ or ‘Normal Louis CK,’” he says. “It’s basically what I feel like it is, observations of daily life, but told very bluntly and sometimes quite flippantly.” Now that he’s got six years’ worth of new jokes, Hilder feels ready to bring it back full circle, and create something back in his home state to take with him to the rest of the country when he goes on tour. He’s not trying to “play it safe” by bringing his album recording to Utah. “For me, I prefer strangers. I want it to be the most honest reaction ever.” When it comes to his friends and family, he says, “The people who’ve been supporting me this whole time and haven’t had the chance to see me develop for the last 6 years, the least I can do is show them the stuff at it’s very best.” His favorite part of his shows this weekend will be, as he puts it, “Seeing everybody I love and miss, and showing them ‘here’s what I’ve been up to!’ and hope that they’re impressed.” Hilder adds, “I love getting back home. I really do miss Utah a lot, and when you’re amongst a big group of friends and everybody is laughing, I don’t think that there’s a better feeling in the world.”

Come out and support Hilder’s shows at the new Club at 50 West Jan. 8 and 9 with shows at 8 p.m. and 10 p.m., and you’ll get to include your laughter on his album for posterity. You’re going to get to see comedy that’s just a little un-safe for Utah, and just clean cut enough to come from one of your very own. The new album, Words on Play will be self-released by Hilder through CD Baby by Valentine’s Day for $9.99. It will be on various media platforms to download and stream, or you can buy a physical copy on CD. If you want to pre-game the weekend shows with even more John Hilder, his first album, Johnsense, is out now through CD baby, Spotify, iTunes, etc. Tickets for the show can be purchased at the door for $10, and it is 21 plus, or minors can attend with an accompanying adult. The Club at 50 West is a full service restaurant and bar, so come hungry and thirsty, while jonesing for a good dose of laughter and nonsense.